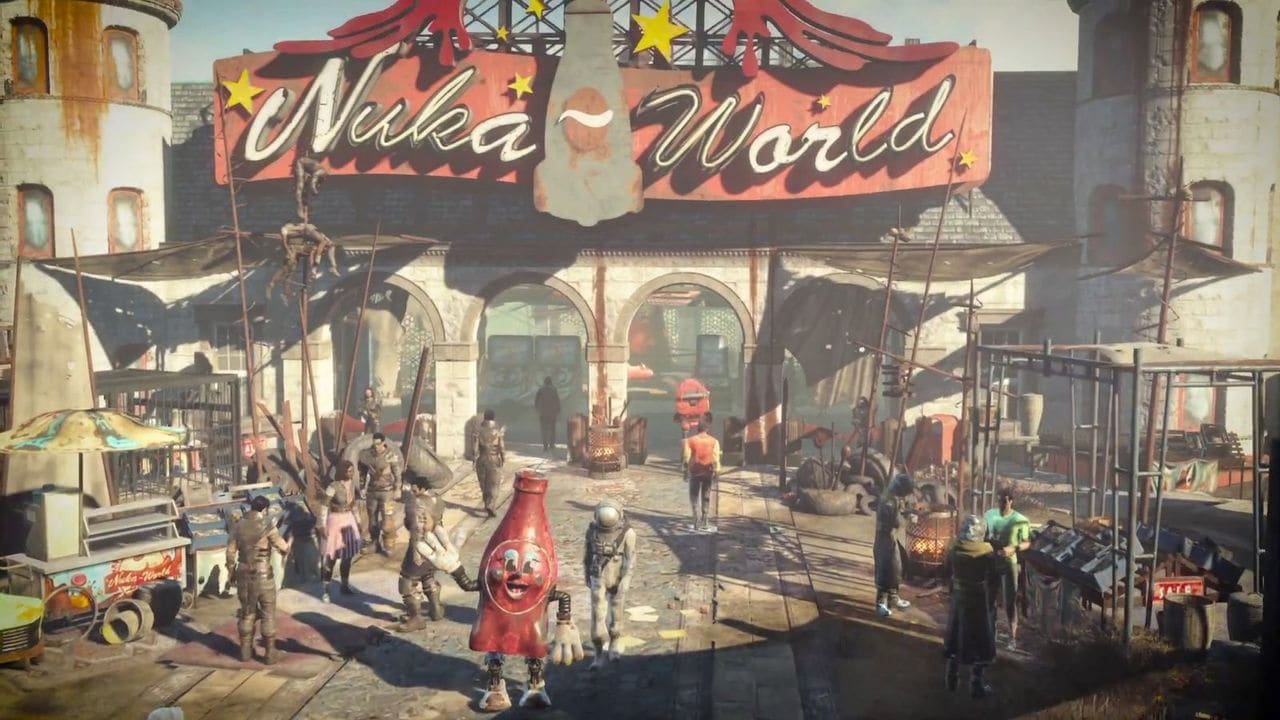 On August 30, Bethesda released Nuka-World – the latest, and the last, DLC for Fallout 4. For many, the big draw of Nuka-World is the ability to turn villain and play a raider, even leading your new gang to pillage Sanctuary and other parts of the Commonwealth. However, the expansion has plenty to offer if you choose not to go the raider route. Like FO4’s other big DLC, Far Harbor, Nuka-World boasts a large map with plenty of quests, new characters, and Easter eggs.

The design elements of this Fallout 4 DLC will be familiar to any Disneyphile. With analogues for Tomorrowland, Frontierland and Main Street, U.S.A., the expansion delivers lots of nostalgia and plenty of Easter eggs for Magic Kingdom fanatics, and there are some elements that recall Hershey Park and other attractions as well. Nuka-World’s ubiquitous characters, Bottle and Cappy, appear throughout the park on signs and merchandise, and many of those items appear in your settlement workshop after you start exploring the park.

Billboards and cardboard cutouts displaying Nuka-Girl evoke the retro art of Coca-Cola, right down to the classic red and white color palette. As you explore the park, you’ll find references to the inventor of Nuka-Cola, John-Caleb Bradberton – a mashup of the names of the creators of Coca-Cola and Pepsi, John Pemberton and Caleb Bradham, respectively.

Gamers looking for a challenge will appreciate that Nuka-World hosts plenty of formidable wasteland creatures and new enemies. Bring your power armor and plenty of Jet and ammo if you want to survive. In true Bethesda tradition, this Fallout 4 DLC is packed with Easter eggs and tongue-in-cheek pop culture references. Star Wars fans can look for the carbonite Hans Solo hidden in the ground within Fizztop Mountain. When exploring the fun house in Kiddie Kingdom, keep your eyes open for a creepy display depicting the famous shower scene from Psycho.

If you were paying attention during the S.P.E.C.I.A.L. video you viewed in your salad days as a vault dweller, you might’ve noticed a warning that a paddle ball makes a poor weapon. In Nuka-World, that’s no longer the case. Kill stray ghouls and new baddies such as giant face-sucking bloodworms and glowing Nukalurks with a bombastic paddle ball that you can modify with blades, fire, and electricity.

Spend some time wandering the southern reaches of the new map and you’ll encounter Evan. Bethesda created this NPC to memorialize a real-life fan of the same name after reading a post by his brother, Reddit user NoohjXLVII. The post detailed the time the two spent playing FO4 before Evan died of complications of diabetes. This type of responsiveness to fans is one reason why Bethesda is consistently a gamer favorite.

Nuka-World is available on PC, PS4, and XBox One, and you need Fallout 4 to play it. The quest that opens the DLC automatically activates via radio beacon when you reach level 30. Follow the signal to the east of Sanctuary to access the new map and begin your wasteland vacation.