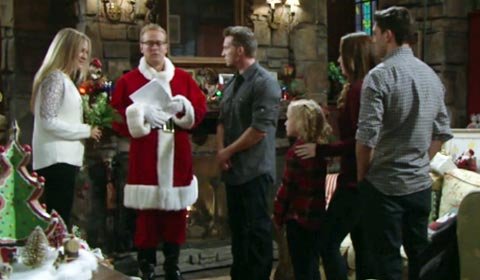 ‘The Young and The Restless Spoilers’: Will Genoa City Ever See The Wedding?

Episode 244 of The Young and The Restless will kick off the week of December 14th, and it promises to be a doozy.

Jack plans on exposing Victor through a big press conference. Does this have something to do with Victor’s relationship with Newman Enterprises? He also plans to tell Micheal about Marco being an imposter. This causes Phyllis to worry about looking like a fool. After all, how did she miss that?

Billy, played by returning actor Jason Thompson, will come to visit Victoria and the kids, asking for another chance. The fact that he arrives hungover, however, sparks a fight. Is there a medical crises coming out for Billy? According to Soap Central, there just might be something of that nature coming from his increasingly out-of-control behavior.

This Monday, Luca and Marissa will come back from Spain, but they won’t have Ava. They will have some explaining to do there. Marissa will also learn that Noah has reported Luca to the Feds. Soap Central hints that this will lead her to run right to Luca.

But what everyone is really in a tizzy about is Ashley and Stitch’s up-coming wedding. In this episode, all the drama around their family makes them consider postponing their wedding. The truth about their wedding will come out, and poor Abby will hear that Ben loves Ashley. Since Ben proposed to her, this could really shake things up. This wedding could ultimately drive the Newman’s and the Abbott’s apart, leaving Genoa City changed forever.

Particularly exciting will be the visit of good Ol’ Saint Nick to the families. He comes through the door and brings all sorts of drama.

The Young and The Restless air on Weekdays on CBS at 11 am, just in time for lunch. If you miss that, you can catch it again on the TVGuide channel at 7 pm.