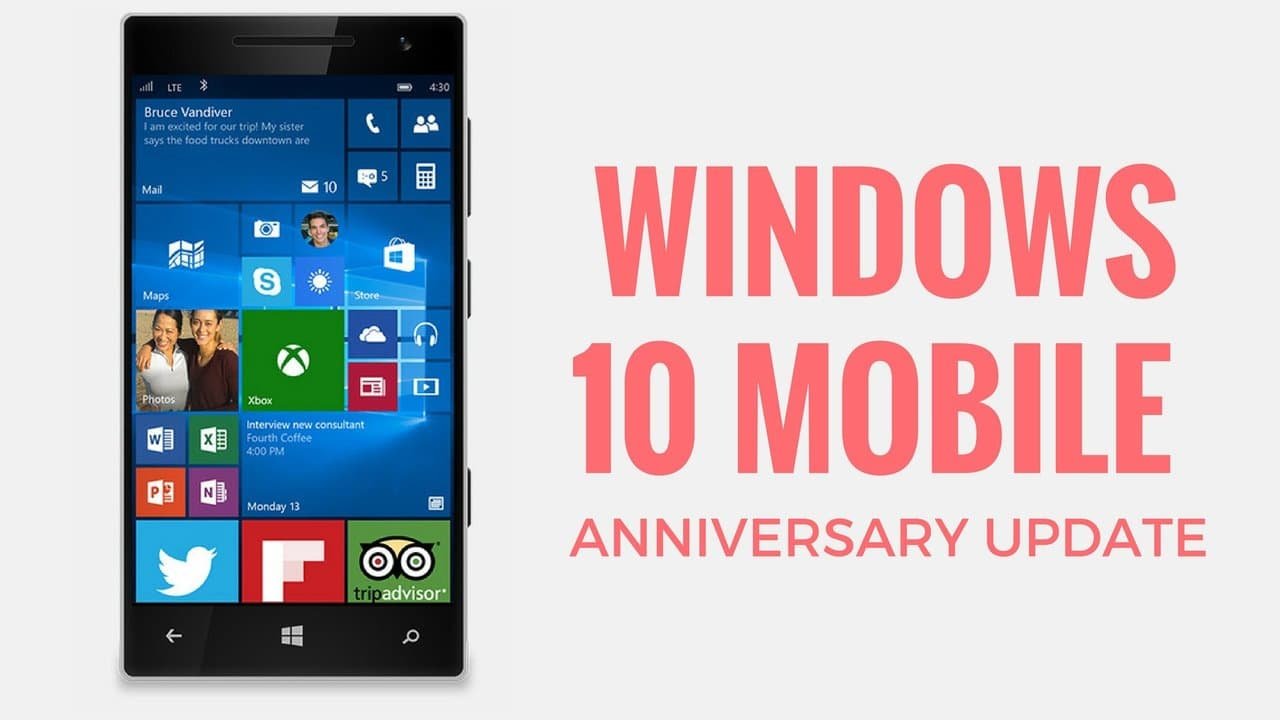 Microsoft has started rolling out the Windows 10 Mobile Anniversary update for all compatible phones, which includes new features and improvements.

In a blog post, Microsoft announced that the anniversary update of Windows 10 Mobile is now available. The final release build 14393.67 weighs about 943 MB and is available via the Software Update option on compatible phones.

Microsoft has also mentioned that the update is only available on certain models and is region/carrier based. You’ll need to have a compatible device to install the new update. However, the Windows 10 Mobile anniversary update isn’t as feature packed as the PC version.

Firstly, Cortana gets plenty of new features and improvements in the latest update. You can actually get a lot of work done using the personal assistant. Cortana can now find your phone for you, if you’ve lost it around the house. It can make photo reminders, show mobile notifications on your PC, and plenty more.

You can even edit photos taken using your Windows mobile, on the PC, by asking Cortana to transfer them seamlessly.

In the Anniversary update, the Windows Camera finally gets a panorama feature. Also, the back button on the lockscreen will now launch the camera.

However, if you have hardware buttons on your Lumia device, then this feature will not work. But that’s not really a problem, as most smartphones come with an extra camera button.

The Settings page in Windows 10 Mobile AU gets plenty of changes. Each settings page now has an icon. Active hours can now be set manually, allowing you to choose when your phone downloads or installs updates.

A new Settings for the Windows Insider Program is now available in the update, which was only present as a separate app before.

Certain settings and toggles have changed places in the new menu, and things are more organized. A new Apps for Websites settings has also been added, but it doesn’t do anything as of now.

The Action Center in Windows 10 Mobile AU gets several improvements. You can now group your notifications based on priority. Then you can select the number of notifications shown from a high priority app. All notifications from the same app is now grouped, and can be easily dismissed.

You can also change the arrangement for Quick Settings toggles, and set images for notifications using Cortana.

Other Minor Changes and Improvements

Microsoft Edge browser now has a new open InPrivate tab option when you want to open a new tab.

New redesigned emojis are part of the update as well, so go ahead, start using them. The update also supports Unicode 9 and that includes 72 emojis, including bacon. However, you can only view these Unicode 9 emojis on Windows 10 Mobile devices. Android and iOS don’t support it yet.

Media controls are now available on the Lockscreen, allowing you to play/pause and change songs without having to unlock your phone.

The Windows Store has received a fresh skin and is much better looking than before.

The update will add support for Fingerprint scanners, but that’s not going to be helpful any one at the moment. As of now, the HP Elite x3 is the only device with a fingerprint reader.

And finally, Windows 10 Mobile devices can now make mobile payments. It’s still in early stages, and doesn’t support a lot of banks, but at least it’s here. It currently only works in the United States and only on the Lumia 950 XL, 950, and 650. Following banks are currently supported; Bank of America, First Tech Federal Credit Union, Virginia Credit Union, People’s United Bank, US Bank, PNC Bank, or BECU. Chase and Fifth Third Bank will be supported soon.

To download the latest update for your Windows mobile phone, you’ll first need to check if your smartphone is worthy. Head over to Settings>Update and Security>Phone Update and click on Check for Updates.

If the Anniversary Update shows up for you, then you can download and install it.