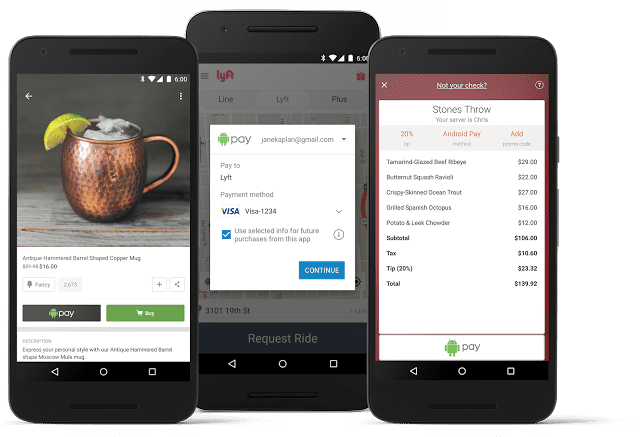 What is Android Pay?

The latest Android Pay update brings the ability to checkout within several new apps on your smartphone in the United States.

In September this year, Google launched Android Pay, a mobile payment service that uses NFC to securely pay at over 1 million locations in the U.S. You can store your cards, special offers and discount coupons all on your smartphone.

The service supports any Android smartphone with NFC, running KitKat 4.4 or above, at any tap and pay location in US. Android Pay also supports credit and debit cards from American Express, Discover, MasterCard and Visa.

Now, Android Pay can be used within apps, so you can complete your checkout process much faster. You no longer have to get out your credit or debit card to pay for your purchases. Simply use the Android Pay option and you’re ready to go.

This feature currently only works in the United States and on select apps. For a limited period, using the service will get you special offers in apps such as OpenTable, Lyft, DoorDash etc.

Developers can make use of the Android Pay API to add the payment service to their app. Thus, more and more apps will start using the Android Pay service and make things much easier for consumers. The update has only begun rolling out, so don’t worry if you don’t see the option on your favorite app right away.

You can see all the apps that currently support Android Pay below. The service is, according to Google, very secure and fast.

Android Pay within apps will be available in more countries in the first quarter of 2016, beginning with Australia. Google is working with financial institutions in Australia such as ANZ, Westpac and many more. More countries will be able to use Android Pay in 2016, wherever tap and pay is available.

The latest Android Pay update is available now at the Play Store. The checkout within apps only works in the United States and in select apps.

Have you been using Android Pay? What do you think of the service? Would you like to use it within apps to make checkout faster?