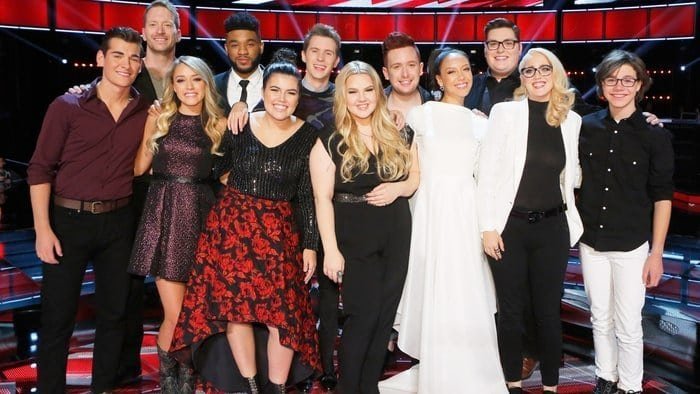 The Voice 2015, Season 9 will see 11 contestants lock horns with their singing talent this week to get into the top 10. Last week, Mark Hood was cut out of the top 11 after her received 45% of votes compared to 55% received by Korin Bokowski.

This week is surely going to get more exciting with Brad Paisley, former adviser of the show returning to perform together with Pharrell Williams. Paisley will perform ‘Country Nation’ while Pharrell is set to start with his song ‘Freedom’.

All the 11 contestants performed yesterday and asked votes to get into the top 10.

Check out the details on the top 11 performers of ‘The Voice’ season 9 as of now to find who’s safe and who’re in danger.

The top 11 of the show that happened yesterday is one of the strongest live shows of season 9 of The Voice so far. Almost all of the performances were outstanding and it’s surely tough for the judges and even fans to decide who should leave. But, someone has to leave the stage and get eliminated. So, who’s safe?

“Who You Are” by Jessie J

22 years old Jordan Smith is a badass when it comes to performing. His blind auditions shut questions about his image and why not? He’s a soulful singer and his voice his so beautiful. Coming all the way from Harlan, Kentucky, Smith is considered as one of the strongest contestants on the show.

It’s absolutely futile to think Jordan will be moving out of the show so soon. If there’s anyone who deserves the title right now it’s him.

“Why Not Me” by The Judds

A Knoxville, Tennessee resident, Emily Ann Roberts is 16 and takes classic country music as her forte. She believes that the new country music has lost its taste because of which she keeps traveling and performing to find that originality.

We won’t be surprised if she’s labeled the next Carrie Underwood because she’s probably the best female contestant on the show who can be a real threat for the top spot.

“Dancing On My Own” by Robyn

A gay by gender, 24 year old Jeffery Austin lost his dad when he was only 9. He developed a passion for music as he grew up with his mother, brother and grandparents in Chicago, Illinois.

His performance in the top 11 was satisfactory and that should keep him safe.

35 year old high school teacher, husband and a father, Barrett Baber survived a plane crash that took the life of 11. His love for music is what he believes brought him into the show. One of the oldest performers on The Voice today, this Arkansas singer is looking forward to pursue his dream as a singer.

Hands down, Baber’s performance in the top 11 deserves the first place in top 10.

“Love Is Blindness” by U2

16 year old Madi David had hearing loss problems before she had a surgery. Currently home-schooled, Davis want to learn music full-time and pursue her career in it.

She got a standing ovation from the judges and the crowd, so we can’t even think that she’s in danger.

A lacross player who discovered her love for music after an injury, 26 years old Amy Vachal comes all the way from Brooklyn, New York. Levine, who did not have any space on his team back in the blind auditions brought her in later.

She grabbed the top 11 spot with ‘Hotline Bling’ and Amy’s ‘Blank Space’ should surely keep her safe in top 10 and beyond.

Someone has to go and elimination is part of every competition. But, who’s in danger in The Voice Season 9 for the top 10 spot? Take a look.

“Only Hope” By Mandy Moore

Korin Bukwoski was the last one make place in the top 11 in The Voice. Coming from a musical family background with both parent in a band, she is a pre-med student who lives in Miami, Florida. Currently aged 20, Korin looks very beautiful on stage with a completely new makeup. But, can her appearance add beauty to her voice? We’ll all know tonight.

“You And I” by Lady Gaga

Another 16 year old contestant making her way from Elberta, Alabama, Shelby Brown started singing karoke with her father in a local bowling alley. She even dropped out of school and continue her education at home so that she could focus more on music.

20 years old McKeel started singing at the church as a kid. Currently living in Richmond, Virginia, McKeel is keep his ministry college on hold in order to grab success in music.

One of the most loved contestants on the show, Braiden Sunshine is 15 but there’s no denying that he’s one of the best performers. Having already been in two bands, Sunshine comes from Old Lyne, Connecticut and has played over 300 shows at such young age.

One of the participant should be leaving the show tonight. It’s a competition and there’s no denying that someone who did not perform better when compared with the other participants should leave. There are fans at your back, but they understand who the most deserving ones for the top 10 position are. So, who should be getting eliminated then?

“Are You Gonna Kiss Me Or Not” by Thompson Square

At only 16, Zach Seabaugh has done wonders with his voice. The only singer from a family that loves sports, Zach comes from Marietta, Georgia and is looking forward to pursue a career in music all his life. We wish him all the best!

Is Zach Seabaugh getting eliminated from The Voice for real?

It’ll be a sad Thanksgiving for Evan McKeel this week. The former Team Pharrell frontrunner, one of the stronger technical singers of The VoiceSeason 9, went home in 11th place this Tuesday, after surprisingly losing in a Twitter Save sing-off against Team Gwen’s underdog Korin Bukowski.