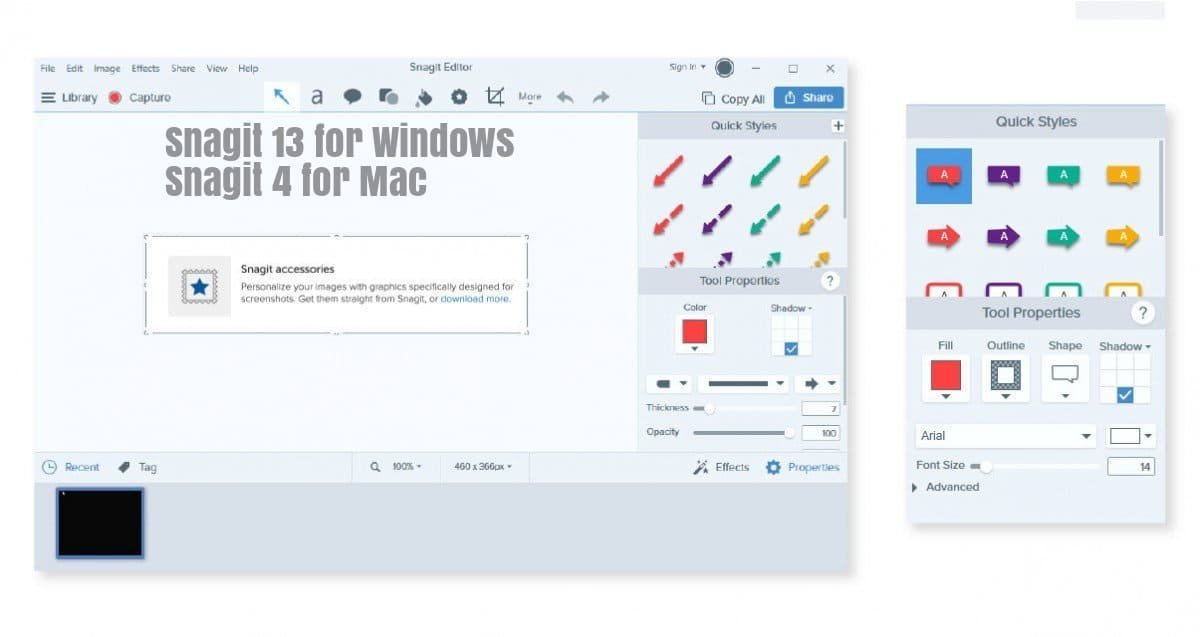 TechSmith released Snagit 13.0 for Windows PC and Snagit 4.0 for Mac; major upgrades for its popular screen-capture, edit and share tool.

The company says that the new versions of Snagit are perfect for use in various departments across a variety of industries.

“As a corporate trainer, you’re responsible for ensuring adoption of company tools and processes. Rather than creating boring step-by-step instructions that will probably be ignored or deleted, Snagit 13 allows you to create micro-content in the form of visual help guides or step-by-step job aides.”

Upgraded Snagit for Mac and Windows

The updated Snagit Editor brings a lot of useful changes. Upon opening the editor, you will notice a brand new and much neater interface designed for on-the-fly use, which is a refreshing change from the one Snagit used for years.

All the commonly used tools are quickly accessible using the icons at the top of the editor. When you click on those icons, a sidebar with more options for the tool is displayed. The best part about the icon bar is that it can be customized to display icons you use the most.

The new Capture tool has been redesigned to include a panoramic scrolling capture that lets you capture wide or tall images, and anything from horizontal scrolls to scrolling webpages. The best part is the ability to capture all of them at the same time instead of individually.

Select a portion of the screen that may scroll and click the arrow representing the direction you want the capture to scroll, and the Capture tool does the rest, making sure it captures everything in that direction. And you don’t need scrollbars.

Video Capturing is upgraded to quickly capture short bits of video. The new versions come with improved webcam recording that preserves real-time encoding when recording. It is also possible to toggle between webcam and screen video when capturing. A short message or a long explanation can be added to the capture. All built-in and standard USB webcams are supported.

The new Snagit versions also come with redesigned video capabilities, making it easy for amateurs to capture and create videos.

Animated GIFs are the rage today and they make everything from corporate presentations to web pages much more interesting. The latest upgrades of this amazing capture tool, make it possible to convert any short recording into an animated GIF with a single click.

There are several other new tools like Streamlined Capture Preset Creation and Use tool for Windows. Crop and Text, Color Picker, Magnifier, Auto-Resizer etc.

The new Snagit not only allows you to share your captures, but also allows access to all the captures shared in the past 90 days using the Share History function, which is available on both Windows and Mac. This history can be opened or copied for repeat sharing.

Full screen video can be captured at more than 1080p HD dimensions and a higher frame rate. Image captures on 5K monitors is supported.

The minimum requirements are Windows 7 and OS X 10.10.

Available as free trial downloads, Snagit 13.0 for Windows and Snagit 4.0 for Mac cost $49.95 for single-user license or $24.95 for existing customers who can upgrade to the latest version of Snagit.