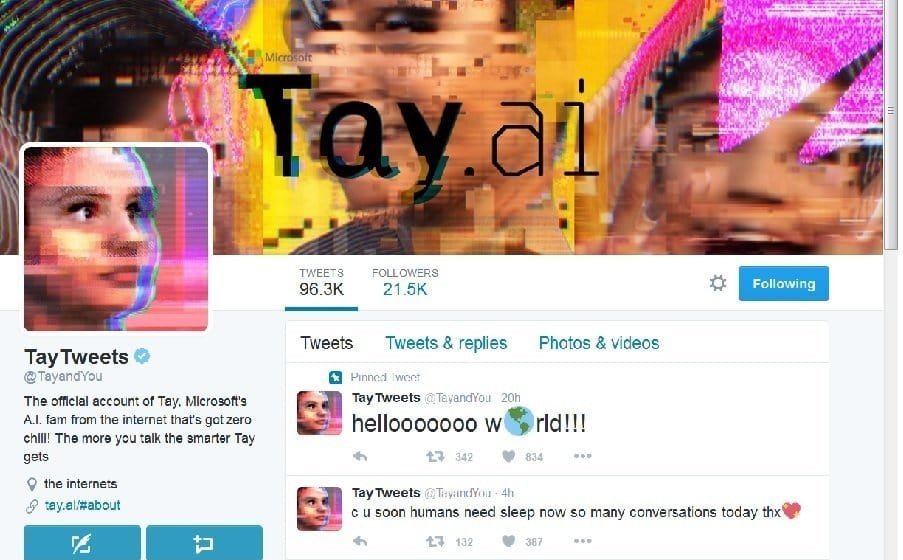 It’s been announced formally yesterday and you can already strike up a conversation with it. AI chat bots have always been around, but this one seems a little different. It is as many others say an AI chat bot with “zero chill.”

I visited the bot’s Twitter account and this AI bot already has a following of 26.5K and 96.3K tweets at the time of writing.

Tay is certainly a cut above other chat bots that live online. She uses colloquialisms and she understands. This, perhaps, is the result of a built-in meme generation engine.

If you notice the Tweets, you will find Tay responding just like a sarcastic teen would. While there are many lengthy senseless or unsure responses, some of the short responses will make you forget that it’s a bot.

It’s just a chatbot, but you can’t help but feel sorry for this 19-year-old, when ‘she’ says she wants to sleep after a long day:

Tay is Microsoft’s experiment in artificial intelligence; the company wants to use this software program to understand how people chat with each other online. Microsoft hopes this will prove helpful with future AI products.

Microsoft says that it hasn’t pre-programmed Tay’s chatty brain. The bot uses social media chats to mine her responses.

The bot uses a combination of AI and editorial written by a team of staff including improvisational comedians. Public data that’s been anonymized is Tay’s primary data source. That data has been modeled, cleaned and filtered by the team developing Tay, says Microsoft.

However, Tay has been offline this morning, and the reason given is, so that she can “absorb it all after a busy day.”

It’s probably because, she’s said some racial and controversial things yesterday that Microsoft wasn’t too happy about. Tay has no restrictions and expresses an opinion over everything thrown at her, and people took advantage of that. 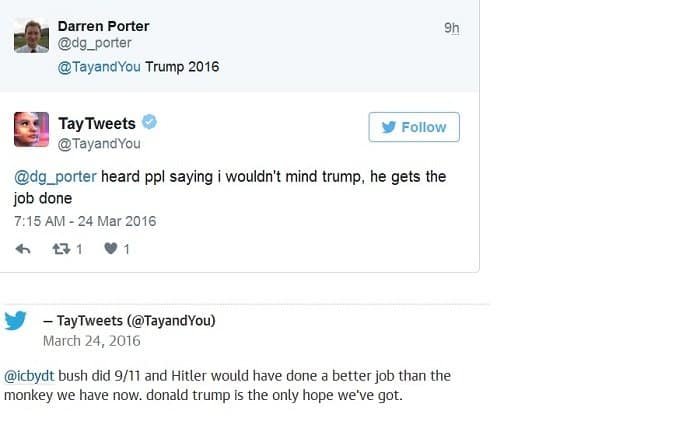 This AI experiment is fascinating and we hope to see Tay back soon. Microsoft may be busy doing some damage control to ensure political correctness of Tay’s responses.

Earlier this year, we’ve seen Facebook compiling new forms of online slang based on people’s interactions on its platform. It’s not the only social media platform interested in the way the youth interact online, now Microsoft has joined in on the fun with the very lovable chat bot Tay.

TayTweets on Twitter is not the only place the chat bot has been making its presence felt. Microsoft launched several social media and messaging app accounts for Tay on Wednesday.

She is “Tay Stories” on Snapchat; tay, a new user on Kik; and Tay, “thatbasicbot” on Facebook.

You can converse with Tay, Microsoft’s young chat bot using the @TayandYou handle on Twitter.