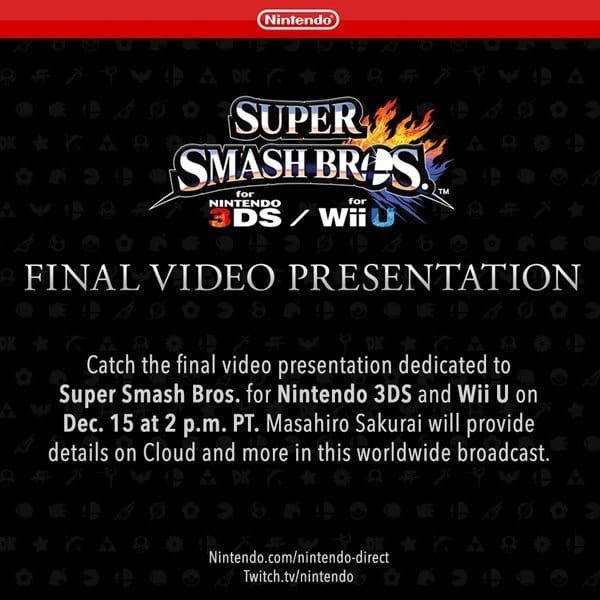 Super Smash Bros. for Wii U and 3DS will soon get more information regarding Cloud, Midgar and more

Nintendo’s popular fighter, Super Smash Bros, will have a Nintendo Direct coming up on December 15. This direct will only feature information pertinent to Super Smash Bros., so this is a must-watch for any fans of the game.

The direct, which promises to include information on Cloud “and more,” will likely reveal additional fighters for the game. A recent update to Smash Bros. included 3 open spots for fighters. Considering that this the last direct specific to Smash Bros, there is a high chance that there will be two characters announced alongside Cloud Strife.

Cloud, who was revealed to be a new fighter last month, will be released with a special stage based off Midgar. Midgar, a city Cloud visits in Final Fantasy VII, will have visits from creatures spawned by summon materia periodically throughout the fight.

The Nintendo Direct will also likely reveal multiple stages that will be available for download. Aside from the Midgar stage, there will probably be at least one stage taken directly from a prior game. Nintendo has already released a number of such stages, so it makes sense that they will follow trend. Also a trend, it should be a guarantee that new costumes will be released for Mii fighters.

The Nintendo Direct will air at 10 PM GST.