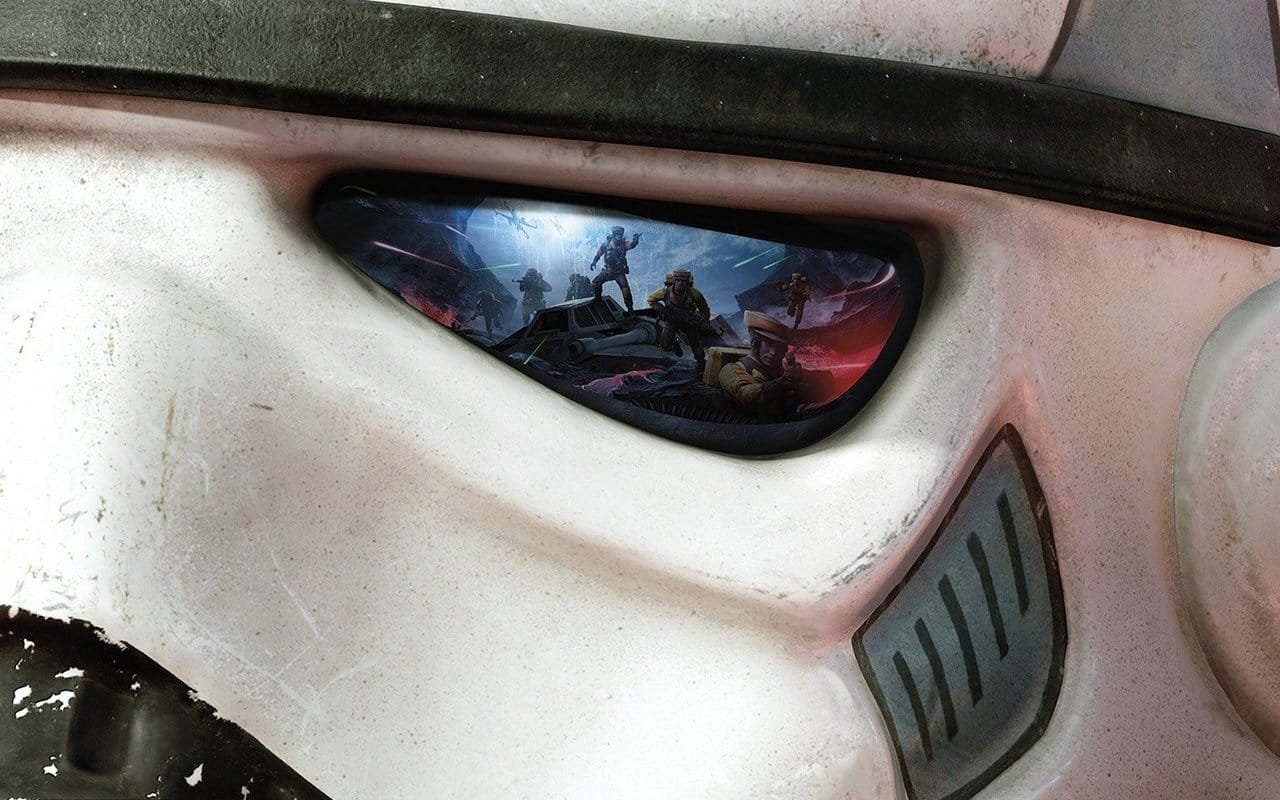 As a thick tree crashed in front of me, I was deafened by the sound of blasters, TIE fighters, and explosions all around me. Running up the tree to escape the crossfire, I noticed an Ewok quickly flee into his home, terrified to make contact with me. Then before I realized it, I was facing a rebel blaster. I reacted quick enough to dodge his blast and send him to his death.

This is just one of the many descriptive scenarios you’ll experience during Star Wars Battlefront. After years of having to do with measly spin-offs that don’t hold a candle to the originals, DICE and EA have tried their hand at restoring a long lost and beloved franchise. Is it a title worthy of Star Wars and Battlefront fans?

I find your lack of bad graphics disturbing

What I love most about DICE and EA’s space shooter are the visuals and audio. The moment you boot up the game and begin your journey into the fray, you will immediately notice just how gorgeous this game looks. Even the most drab of places like Tatooine are brought to life by graphics and scenery that make the whole thing feel real. Each character including the rebel and imperial troopers have an insane amount of detail put into them. Heroes like Darth Vader and Boba Fett look like they were ripped straight from the movies. Even the TIE fighters and X-wings themselves were lovingly cared for in this department. DICE was definitely looking not to change anything and instead enhance the classics and give them a fresh coat of paint.

The only thing I find more impressive than the visuals in this game is the audio. When you’re in the midst of the battle, the familiar sound of blasters, ships, explosions, and lightsabers bombard you from all fronts (no pun intended). What’s more impressive is how much care was put even into the audio. Every sound effect feels and sounds exactly like it did in the original trilogy, right down to the little shots from an X-wing. There are some anomalies, however, mostly concerning the voices for the heroes. Darth Vader doesn’t have quite the same impact as when he was portrayed by James Earl Jones, and there’s something a little off about Luke’s voice. Also, I came across many moments where the sound in the game would cut in and out. It detracted from the experience greatly, but thankfully, this wasn’t always the case. Other than that, the audio was spot on.

Control, control, you must learn control!

Everybody was worried when EA started revealing more about this game that the controls would be abyssmal and clunky compared to the originals. Luckily, this is not the case. There are many differences though. Whereas the original Battlefront games played more like an third-person action shooter, this title is a first/third-person shooter through and through. A lot of people have labeled it “Battlefield with a Star Wars skin.”And to be honest, they’re not entirely invalid in their thinking. There are a lot of similarities between those two games for sure, but keep in mind that Star Wars Battlefront is still its own thing.

I must be honest with you; I am a console gamer. I was never really into the PC and am not overly familiar with using a keyboard and mouse. So it says a lot about how excited I was to play this game that I was willing to play it on the computer. And in my experience, everything controlled really well, with the exception being the ships (X-wings, TIE interceptors, etc.). I found it too slippery to try and maneuver around the map with the keyboard and mouse, I often times found myself crashing into the scenery (however that may be due to my lack of skill). So when I was in a ship, I switched to using a controller, which worked better for me. When I was on foot or a hero though, it was keyboard all the way.

I must face him, alone

While it’s very evident that Star Wars Battlefront was made for multiplayer, there are some options if for some reason, that is unavailable to you, or you’d rather avoid getting slammed by ten year old kids. There is no campaign or story mode though. That being said, I don’t think it needs it. If there were a story mode, it would just be something we’ve played through and seen time and time again. And with how much care EA and DICE put into making everything look and feel like authentic Star Wars, there’s really nothing else they could do with a campaign mode.

Just because there is no story mode, however, doesn’t mean there isn’t enough content to play through. Like every game that values its players, Battlefront has a recommended tutorial mode to play through before you get into the action. On that note, if you’re an experienced player in the fps genre, skip the tutorial. It won’t teach you that many new things anyways. As a matter of fact, I was able to just start a match and grasp the controls in just a few minutes of play time.

Now the single player modes are slightly generic. You have battles which consist of you playing a normal match like you would online, except you play locally with a friend or against AI opponents. You can play regularly, or if you feel like doing some damage, you can do a hero battle, which allows to pick any hero you desire and use them for the duration of the match (Boba Fett is my favorite).

The most interesting of these modes however, is the survival mode. In a manner similar to that of Halo Reach’s firefight and Call of Duty’s Zombie mode. You play as the Rebel Alliance fighting waves of imperial soldiers that progressively get harder. And let me just say, that they become very unforgiving as you progress. It was easily one of my favorite modes throughout my play time and would recommend it anyone who was trying the game out.

Join me, and together we can rule the galaxy

Star Wars Battlefront has some great merits in its single player and aesthetics alone, but now let’s deal with the elephant in the room- is the multiplayer good?

This is actually where DICE and EA’s shooter differentiates itself the most from the original Star Wars Battlefront I and II. The originals put more focus on the solid gameplay that they established and working together with your troops to ultimately achieve victory. This time around, there are multiple different modes to choose from that attempt to shake up your experience. For the most part, it works. Modes like hero hunt, where everybody is on a team against a particular hero, is a rampant and difficult good time. Supremacy is an oldie but a goodie where you capture points and try to control the most territory. There are other modes, however, that don’t work as well. Heroes and Villains, where all six heroes are put on the field at once, sounds fun on paper, but is really imbalanced especially for those unlucky enough to have to be mere soldiers. It’s like pitting Hawkeye against Superman. You just don’t have a single chance.

My one big complaint about this game has to do with its multiplayer. There is an evident learning curve to becoming good at this title, and it is not shallow by any means. As a matter of fact, I was bested in combat many times by people who had been playing it much longer than I had at the time (and the game hasn’t even been out a day if that tells you anything). Now, I’ll be honest, I kind of suck at the game, but even then I still felt that the odds were stacked against me at times.

One of the additions EA and DICE managed to slide into Battlefront is an immense amount of customization. I’m specifically talking about loadouts and appearance. This is all based on a level and currency system. The higher you rank, the more items you unlock (including more powerful weapons), and the more you play, the more money you get. Once you are at a high enough level to unlock a particular item, you have the option of purchasing and applying it to your character. Naturally the much better stuff comes at a higher rank, so you’ll have to play for a while before you get those. This is also another bit of a draw for the game. New players who come in could easily get stomped by higher ranking players who have access to the better weapons in the game. It’ll be frustrating for those who decide to get the game much later down the road, but it shouldn’t detract too much from everything else.

Reaching for the stars

Star Wars Battlefront is a fantastic representation of what the Star Wars franchise is and harkens back to a time when it was the king of all films. EA and DICE have paid so much respect and attention to the source material that you can’t help but feel that it is what a Star Wars game should be. For the first time in a game, I really felt like I was actually part of the films, either helping save the galaxy or conquer it. Now the game definitely has its issues as far as content, skill, and ranking, but those are minor compared to what it does right. If you like Star Wars or even shooters in general, this is not a title you should skip.

Is Star Wars Battlefront game of the year worthy? No. Is it still worth a buy? Without a doubt.