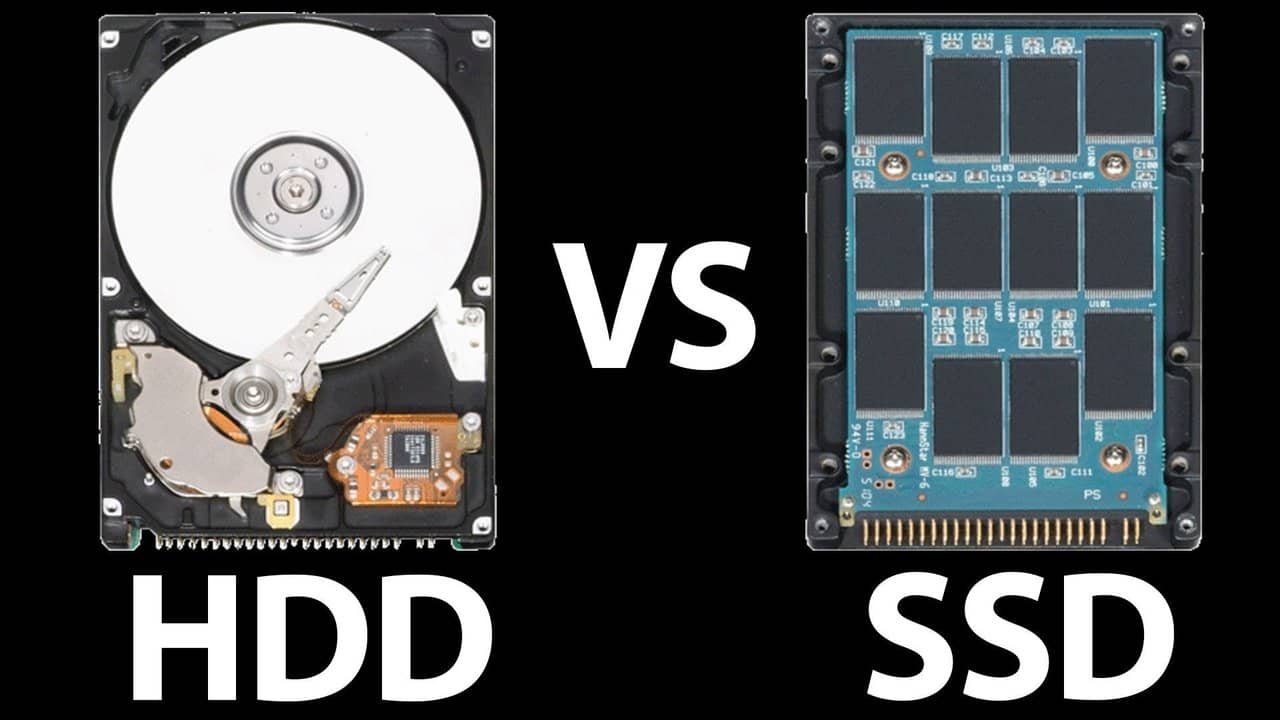 In this article we will explain the differences between HDD and SSD devices and show advantages and disadvantages of both technologies.

Hard disk drive (or hard drive, fixed disk, HDD) is a technology pioneered by IBM in 1956. Yes, you read that right, hard drive technology is almost sixty years old. Hard drives use magnetism to store data on a rotating disk. The “needle” floats above the rotating plate and reads and writes data. As the plate rotates faster and faster data is processed on a hard drive. After shutting down your computer, data remains on the disc.

Solid-State Drive is also a device for permanent data storage that gets written and read through integrated circuits. Even though everyone is using the word “disk”, SSD actually has no disc or any mechanical (moving) parts. Most of you are familiar with the USB memory and SSD is sophisticated version of USB sticks. The data on the SSD are stored in microchips, while hard drives use a mechanical arm for reading / writing data. That is the reason why the SSDs are much faster.

In comparison, which is faster SSD or HDD?

Rising from the comfort of your couch to retrieve a book from the bookshelf, or that same book magically appearing in front of you? In the same way, we can compare the HDD with an SSD. Typical SSD is based on NAND flash memory, a type of nonvolatile memory, so you can turn off the drive, and it will not “forget” what is stored on it. SSD has no mechanical arm, to write and read information, but instead relies on an embedded processor, or “brains” or controller, which performs a series of operations associated with reading and writing data. This controller is a very important factor in determining the speed of the SSD.

In principle, both devices can do the same job: run operating system, install applications and store personal data (pictures, movies, documents…) But which device is better to choose? That depends on the purpose. First step towards your answer is getting to know the advantages and disadvantages of both types devices.

In this article you will find guidelines and answers to these questions, because we underline the differences between devices.

WHAT ARE THE DIFFERENCES BETWEEN HDD and SSD?

Speed ​​is the main advantage of SSD. SSD works considerably faster because of lower latency, and the easiest way to see that is comparing HDD and SSD when booting up your operating system. If the speed of your computer is an absolute priority, you should consider purchasing SSD.

SSDs are silent because they have no mechanical parts, unlike hard drives which have moving parts, discs that are rotating, movable head that reads data etc. SSD is winner in this category too!

Hard drives are the dinosaurs of the digital age, featuring quite old and elaborated technology, which makes them much cheaper than SSDs (which is the reason the price of HDDs tends to remain relatively stable). So, if we take the criterion of “dollar per gigabyte,”, it is much cheaper to buy the same capacity HDD than SSD. For example, if you wish to purchase additional storage space of 1TB, 2.5 inch, prices are:

With classic hard drives sooner or later disk fragmentation occurs, depending on the operating system or file system. In order to prevent that, defragmentation is needed to keep faster performances of hard disk on Windows. SSDs does not suffer from these problems – files can be scattered all over the disk, without loss of performance. Chips are accessed practically in real time, so this is the major advantage of SSDs.

Usually, average SSD has smaller capacity than average HDD. Generally speaking, there is constant demand for bigger drives, so you can already find HDD with capacity of 4TB (over 5000$ in November 2015). For most of the people, we still have to mix-and-match SSDs (for fast application performance and system operations), while still using HDDs for large storages. So, the winning combination would be smaller SSD from 128 to 512 GB and HDD with 2-4 TB. By this criterion, the hard drive has the advantage.

Hard drives are not much resistant to shocks, since the “needle” that reads and writes data does not have much free space, especially during operation. To make this clearer, please watch the attached video clip “Hard drive teardown”:

SSDs are typically more resistant to shocks because they have no moving parts; So, in case you drop your laptop, you have better chances that SSD “survives” the shock than HDD. Regarding this, the SSD has the advantage. However, SSD has another ailment that we decided to introduce more in the next section – reliability.

As previously written, SSDs have no moving “needles” or disks in them and data is written almost in real time – data processing in the SSDs had accelerated over 80% in the last couple of years. But are SSDs reliable carriers of data?

It is generally known that all electronic equipment from the processor to memory is made on silicon plates. The prints on these boards are becoming smaller and work under increasingly lower voltages. Silicon is extremely susceptible to radiation and easily degrades its crystal chemical structure if not properly protected and treated. Therefore, all these devices are sensitive to electrical, electromagnetic and solar (light) discharge or radiation. SSDs are nicely packaged and have a lot of protection from short circuits, electrostatics, and the chips are protected from light, but if any electrical impulse occurs that is not standard or is greater than 5V positive or negative charge, your SSD is dead and data is lost.

Disks within the HDD, though dead electronically, keep all your information in the same place and even over 10-15 years after the last use. All you need is to take it to an authorized service and repair center will extract out all the data and transfer it wherever you need.

SSDs can tolerate the higher temperatures in comparison to HDDs. If the temperature is above 35°C, that shorten the life and reliability of hard disk, and the data can become distorted at temperatures higher than 55°C.

Hard disks are very widespread and there are many manufacturers like Hitachi, Samsung, Seagate, Toshiba and Western Digital, which have a variety of models to offer on the market. Also, generally speaking, hard disks are still more popular.

Along with the appearance of netbooks, tablets and other smart devices, the trend of compactness of storage space is becoming even bigger. Since hard drives are limited in terms of physical size, this is where SSDs will shine. Technology is constantly improving and we see smaller and smallers cells that can be integrated into these devices.

We have seen that the HDD remains excellent as a data warehouse to be stored on and keep it in a long time. SSD is an excellent, almost fantastic memory unit for fast data processing. This means that the SSD is suitable to carry the operating systems, audio systems, video production, servers and things like that which require large input / output amount of data to be processed and forwarded, but for everything else, we still need a good old HDD.

If you’re a gamer and you’re reading this, you must know that most gamers are still committed to the hard drive, in spite of the weaknesses that we have mentioned in this article. Why is that? Because, if the SSD is running Windows, updates drivers, and keep the additional software (such as Office, an audio and video player, etc.), you’ll probably have a problem with disk space. Installing couple of popular modern video games would take too much space, so HDD is always better solution for that.

One might ask: Why should I have SSD if my Steam collection of games is much greater than the size of the SSD that I can afford? Games can be installed on a secondary hard drive, but then there are no benefits of the SSD. Also, any new or additional game folder you put on SSD, for which we are told they have a limited number of entries, reduces the lifetime of the SSD. You can find many posts on the internet about hard core gamers who ruined their SSDs after a year and returned back to the HDD.

If you are looking to back up your data, choose the HDD because it is reliable. If SSD fails, recovery will be significantly more expensive (if the data does manage to survive the process, which is unlikely with SSDs). Fixing an HDD is usually done by replacing mechanics, and data usually ends up intact.

If you are looking for a suitable storage for laptops, where it is important “to withstand” on the battery as much as possible, you should know that the battery life is extended when SSD is used. Newest tests have showed that the new HP laptops with an SSD can one day on a single charge. The reason for this is the lower power consumption of the SSD (~2W) compared to HDD (~6W), which is 30% – 50% of HDD consumption. SSD is also much lighter than hard drives, only 77g compared with 752,5g HDD, so it will not pose a burden when relocating a laptop or desktop computer. When it comes to connectivity, in essence, HDD and SSD look the same and use SATA or mSATA interface.

Thus, the HDD is better in terms of cost, available memory, availability, and the SSD is faster, produces less noise, less energy-consuming and is much lighter than the HDD. If you need a high-capacity drive, if you don’t consider speed important when reading and writing to disk, and if you do not care how long it takes to get a laptop powered up or transfer data, then buy a HDD (hard disk drive) , otherwise your selection should be SSD.