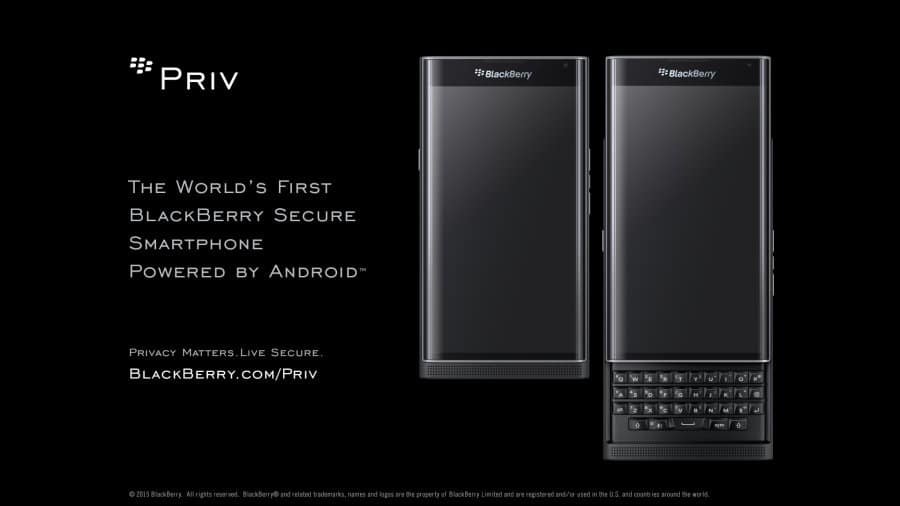 Ever since its launch, BlackBerry Priv has been in the news and the majority of what we hear is about BlackBerry’s shift to Android. In the smartphone wars where there’s stiff competition, BlackBerry fans hope the company’s first Android phone goes further.

Considered the de rigueur instrument of business communications; Administration officials like President Barack Obama are enamored of the BlackBerry Phone.

When serving as US secretary of state, Hillary Clinton repeatedly demanded access to the same type of highly secure BlackBerry device, the modified 8830 World Edition used by the President. This was in the news every single day and we all know that her request has been denied.

The former darling of the smartphone world is hoping to recapture its past glory with the Priv that has an Android OS that’s very much of the present.

Whatever the future holds, Priv’s superior security and privacy cannot be denied. Let’s take a look.

BlackBerry Priv continues to offer many of the features that helped BlackBerry dominate the business world. Features like strong built-in security, an abundance of productivity apps along with the slide-out keyboard are all in line with what’s helped BlackBerry build such a devoted following.

BlackBerry has a lot of elite admirers: CEOs, Sales Executives, Aerospace Engineers, Bestselling Authors, Sports Editors and a host of other everyday users.

The fact is, security and privacy are both important aspects of a smartphone, not just for administrators and celebrities but for all users. We store sensitive and personal data and pictures on our smartphones that we want to keep personal.

At a time where data privacy and safety are in the spotlight, BlackBerry Priv comes with several hardware and software security improvements and additions that distinguish it from other Android phones,

Everything from the device level to the application level on PRIV is protected.

It has a full suite of tools which allow you to take complete control of your private data.

BlackBerry’s built-in security includes securing the booting process, OS-level protection offered by Android Lollipop and default encryption of data to ensure your information is only accessible to you when you enter the password/PIN.

The “Root of Trust” can be compared to the foundation of a building. The deeper the Root of Trust, the more secure the device is.

With this, security is built right into the handset. A “specialized manufacturing process” injects cryptographic keys into the device hardware, and these embedded keys constantly check every part of the device – from the hardware to the operating system to apps – looking for changes that could indicate a security compromise, ensuring nothing is tampered with. It also keeps a watch out for any attempts at disabling high-security applications.

Such security at a lower level – the hardware level – makes it difficult to crack the a BlackBerry Priv device.

The “hardened” Linux Kernel in the BlackBerry Priv bolsters security. Linux kernel hardening is a strategy that involves hardening the Linux kernel with patches and configuration changes. This offers enhanced security and many forms of attacks are prevented.

One of the things we do the most with our phones is, installing apps. In many smartphones, when you install apps, a lot of your personal information is shared with the app provider. Of course, this is something many people don’t pay attention to. BlackBerry Priv has a unique feature that gives you the option to decide on the information you want to share.

DTEK by BlackBerry integrates with BlackBerry Integrity Detection architecture, which is used to monitor the device continuously for events of configuration changes that could indicate a security compromise.

The pre-installed DTEK app on the BlackBerry Priv keeps your phone secure. At a glance, you can know the security rating of your device. It uses colors and a “tachometer” to help you identify areas where there are security risks. You will also be told what action to take to keep yourself secure.

Event Logging helps you keep track of what your device has accessed, how your information is used and the duration of use.

The software monitors the following:

You can also set up notifications for alerts. For example, in case of a jailbreak event, an unauthorized installation and if somebody is trying to track your BlackBerry Priv device – you’ll be notified.

BlackBerry Secure Compound is BlackBerry’s very own and popular security software that protects your passwords. It is known to offer high levels of protection to sensitive data and security-focused applications.

This is an interesting and unique way to secure your device and the image above is self-explanatory. You set a picture password by using a number and selecting a specific area on a picture. To unlock your BlackBerry Priv, choose the number and drag that number to the specific area on that picture.

You have complete control over who can access your media: pictures and videos. Only the Primary User can make any changes to the Media Card files. This prevents any other profile from accessing your personal information or making changes.

Segregation of Personal and Work Data

BlackBerry Priv integrates with the existing Android for Work suite, which makes it possible to segregate your personal and work accounts. This comes loaded with the BlackBerry DTEK application.

Whether or not the Priv itself stands out from the multitudes of high-end smartphones out there, the security aspect screams “about time” to me.

Does a safer and more secure Android phone appeal to you enough to buy a BlackBerry Priv?