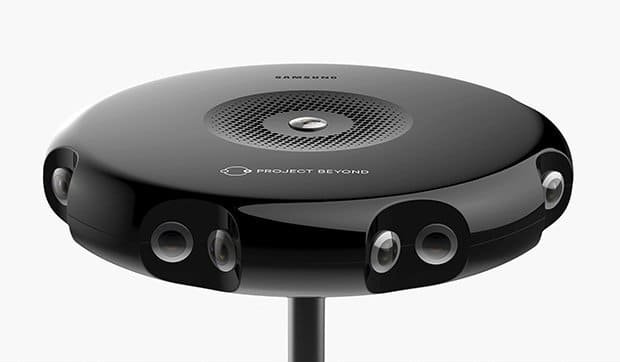 Samsung Gear 360 VR Camera: To be Unveiled Alongside Galaxy S7

The much rumored Samsung Gear 360, a VR camera, will debut alongside the Galaxy S7 and S7 Edge on February 21.

Samsung has been focusing a lot on Virtual Reality in recent times, and their Gear VR headset helped make good Virtual Reality affordable and available to everyone. Samsung initially revealed a 360-degree video camera last year under the moniker Project Beyond.

The device would let developers create VR content for Samsung’s Gear VR headset. It has a total of 17 cameras, 16 ultra-wide lenses around the device and one on top. The camera can record video at one gigapixel per second. Unfortunately, the Gear 360 will be a more affordable and less impressive version of this.

Then, last month, the company trademarked the name ‘Gear 360’, which pretty much confirmed that Samsung was indeed working on a 360 degree capturing device.

A new report from SamMobile now confirms the existence of the Gear 360 VR camera and it is said to be unveiled soon. Most likely during the February 21 announcement of the Galaxy S7 and S7 Edge. Samsung also revealed their Galaxy S7 Unpacked teaser video recently, which featured a person using a Gear VR headset and watching the video.

It will not feature 17 cameras, but instead use two 180 degree fisheye cameras to capture 360-degree video and pictures. The device will be able to pair with a smartphone, most likely the upcoming Galaxy S7 variants. Once paired via Bluetooth, the user can control the camera and have a live view through the Gear 360 Connect app.

There would be an integrated battery on the Gear 360, allowing it to record videos without any cables. It would also feature some internal storage to save videos and photos. It’ll also carry the model number SM-C200, according to the site.

The camera will be bundled with a Gallery app, and a remote viewfinder app, with several features included. You’ll be able to download these apps onto your smartphone and sync with the camera.

There will be several camera modes as well, such as exposure control, white balance, HDR, ISO selector, and Live view option. The apps will also allow you to select a 360-degree recording mode or use only the front or rear camera for the 180-degree view. Other modes such as VR, Dual, Panoramic, Time Lapse and Loop video will also be available.

Furthermore, the website reports that Samsung will price the Gear 360 camera very well and that it would be affordable enough to the masses. Anybody with a Galaxy S7 or S7 Edge and a Gear VR headset, can record 360 degrees video and view them.

Don’t expect it to be super cheap though as the Gear VR headset still costs around $100. The Samsung Gear 360 will be announced alongside the new Galaxy S7 smartphones on February 21.