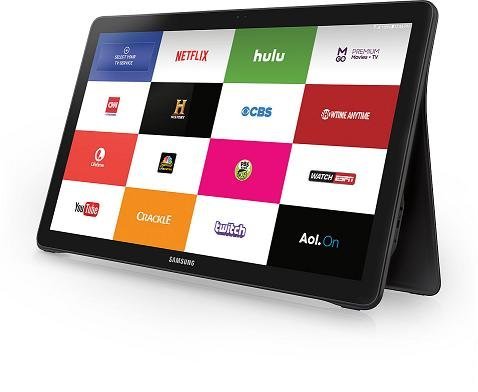 Samsung officially confirmed the Galaxy View tablet in October, and now it has a November 6 U.S. launch date. This is essentially a large-scale tablet that has an expansive display. So it is not exactly like any tablet released before it.

The Galaxy View has an 18.4-inch display. Yes, you heard correct, that is 18.4 inches! That is an unprecedented display specification for a tablet. In comparison the Tab S2 has a 9.7-inch display. The GV resolution amounts to 1080 x 1920 pixels, and the tablet has a full HD display.

With an 18-inch display it is not a lightweight tablet. So Samsung has added a kickstand that includes a handle. As such, with its handle you can pick this tablet up much the same as a brief case.

Having been designed for video streaming, the Galaxy View includes a decent battery. This tablet has a long-lasting battery that can run for about eight hours. And it also supports USB On-The-Go with which you can charge your phone.

At the back of the tablet there are stereo speakers. Those are speakers that give you quality stereo sound. Furthermore, the Galaxy View includes a 3.5mm jack.

Other Galaxy View specifications are relatively standard. For instance, it has two GB (gigabytes) of RAM. Its internal storage amounts to either 32 GB or 64 GB, but you can expand that with its microSD expansion slot. With its card slot you can bump up the storage to 128 GB.

The Galaxy View also has an Octa-core Cortex-A53 CPU. That is a CPU with a 1.6 Ghz clock speed.

This tablet has just the one camera on the front. It is a basic camera with a 2.1 megapixel resolution. The camera can record video at 30 fps.

Samsung is launching the Galaxy View this November in the USA. The tablet is available at $599.99. You can find further details for the tablet at the Samsung website. Below is a list of the tablet’s specifications.