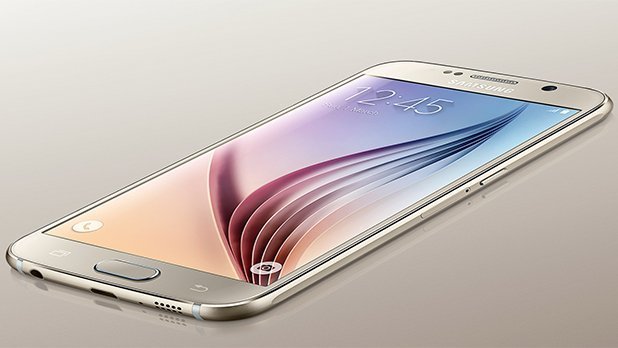 Let’s talk about the all new Galaxy S7, the successor to last year’s Galaxy S6 and the 2016 flagship from Samsung. Well, if you were keeping up with all the rumors and leaks, you probably know about the S7 design and specifications.

Samsung asked everyone present at the event to put on its Gear VR headsets for the launch of the new devices. It was strange to see an entire crowd wearing headsets and turning their heads around in their seats as if controlled by something or someone.

Updated on 03 March, 2016: Samsung’s Galaxy S7 edge will go on sale around March 11th but a copy of the device made available to a user who posted some detailed impressions of it here at Reddit’s /r/Android page. The user seems to love the device and all it has to offer.

So what’s new with the Galaxy S7? Well, you get new hardware, new camera, new battery, water resistant design, microSD slot and the always amazing AMOLED display. It’s not so new from the outside, but there’s a lot of cool stuff happening inside. Let’s start with the official specifications;

As this is Samsung’s flagship for 2016, the internals are super powerful, the camera will most likely be the best seen on a camera and it’s going to be super smooth with the new improved TouchWiz and Android 6.0.1 Marshmallow.

The smartphone is 7.9mm thick, a little thicker than the

The camera on the S7 is a 12-megapixel shooter, down from the 16 megapixels one on the Galaxy S6. However, this was done to improve the low-light capabilities of the camera.

The individual pixels on the camera are now larger with aperture f/1.7 lens that can capture around 95 percent more light. There’s also optical image stabilization for improved accuracy and sharper images. The camera also has something new called Dual Pixels, which allows faster autofocus and it truly is super fast.

The smartphone also comes with several new features such as an Always-on Display, similar to the one on the LG G5. You will be shown important information such as time, date, calendar and notifications. All this without having to unlock the smartphone. And since this is an AMOLED display, only the pixels needed to show the notifications will light up.

The U.S version of the S7 will feature the Snapdragon 820 SoC whereas an Exynos 8890 will be available for models in other parts of the world. The 820 chipset improves CPU performance by 30 percent and GPU performance by 60 percent. If you were wondering whether the smartphone has dual-SIM support, well, yes it does.

The device also features an internal pipe that’s filled with a liquid to provide cooling to the GPU while gaming. There’s also several new software features that will improve user experience. Samsung has reduced bloatware as well.

All major U.S carriers such as AT&T, Verizon, Sprint, U.S Cellular and T-Mobile will sell the S7. Samsung Experience Shops at Best Buy will let users try out the phone starting February 24. The phones will cost equivalent to last year’s Galaxy S6 and S6 Plus pricing, so don’t expect it to be cheap. It’ll be available in Black Onyx, Gold Platinum and Silver Titanium and White.

We have prepared a list of ‘Best Cases for Samsung Galaxy S7‘ available to buy right now, check it out if you want to be protected from day one.

The latest leak come from a tweet by Evan Blass (@evleaks): 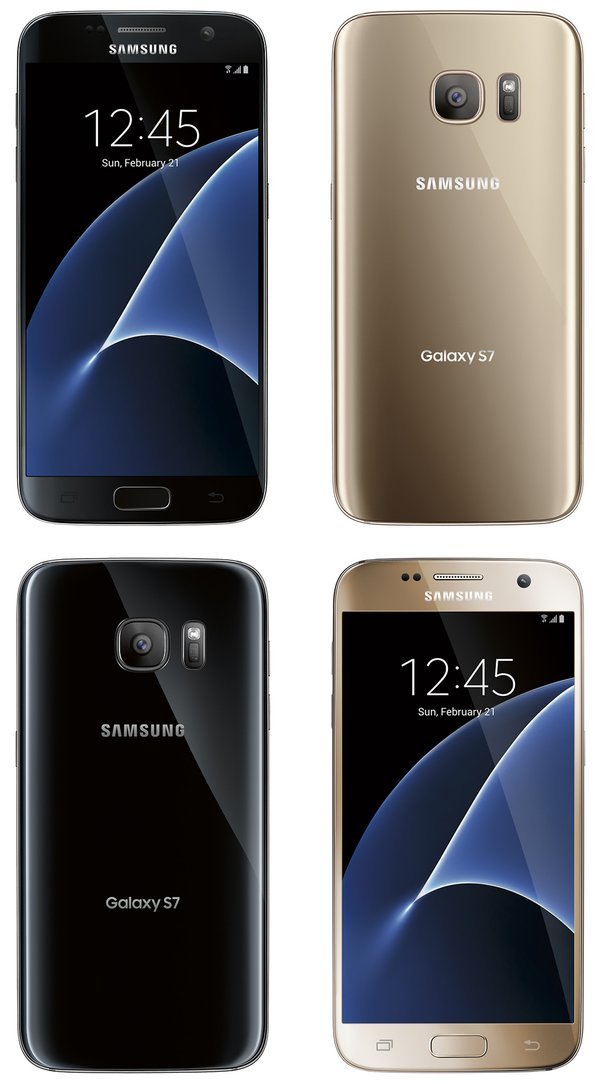 Another leak also comes from a tweet by Evan Blass (@evleaks): 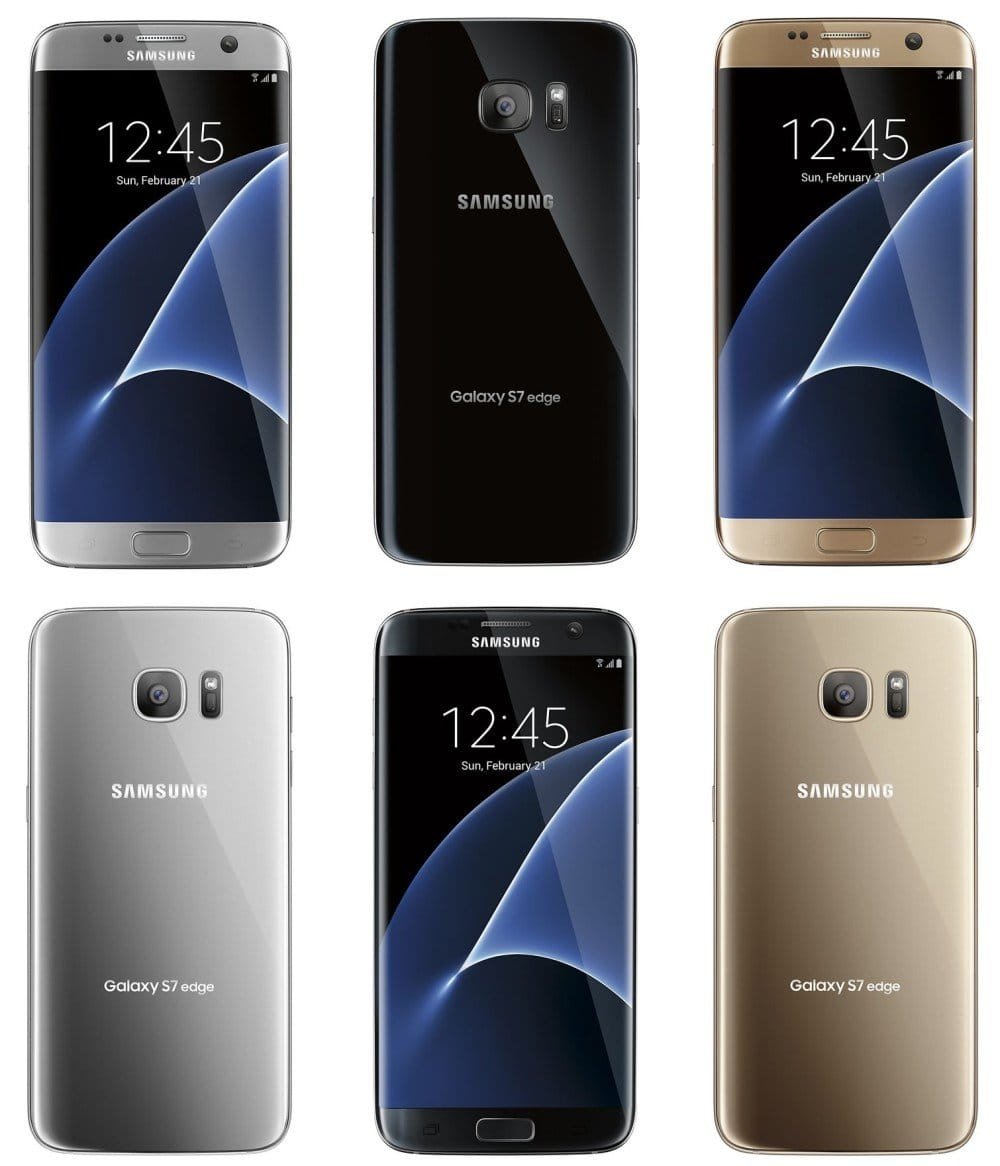 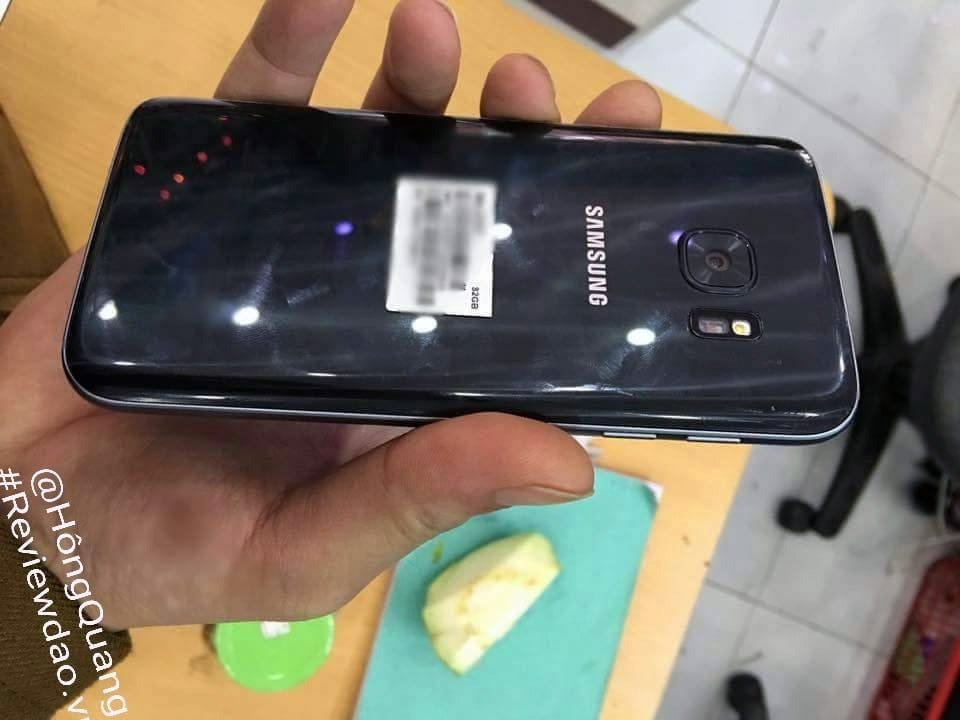 It matches up very well the leaked photo by Evan Blass, similar rounded back like the Galaxy S6 and what looks like proper black back.

The next photo, posted by Weibo user JKwan, shows the front of the Galaxy S7 Edge. It’s running AnTuTu benchmark app that shows a score of 134704. Yes, we know, it sounds unbelievable. 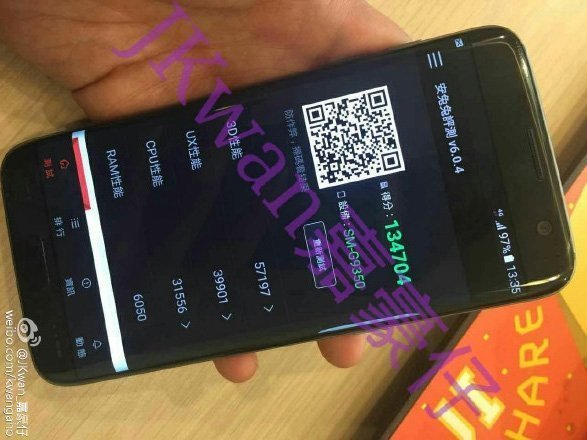 You can clearly see the edge of the screen. Both Galaxy S7 and S7 Edge will be revealed on February 21, right before MWC 2016

Update 07/Feb/2016: The Samsung Galaxy S7 & Galaxy S7 Edge announcement is only a few weeks away, and we’re still getting new leaks almost every day. Nobody is going to be awed when Samsung announces the Galaxy S7 and S7 Edge on February 21. All of the specs and even the design have already been leaked.

The Galaxy S7 will look very similar to the Galaxy S6, but there will only be two models this year, the S7 and the S7 Edge.

Recently, a leaked presentation slide revealed the specs that we already knew. The Galaxy S7 will feature a 5.1 inch 1440p display, a 12 megapixel BRITECELL camera, 4GB of RAM and either the Snapdragon 820 or Exynos 8890. It will be running Android 6.0.1 out of the box.

The Galaxy S7 models coming to the United States will most likely feature the Snapdragon 820 processor. And even this has been confirmed thanks to the FCC. 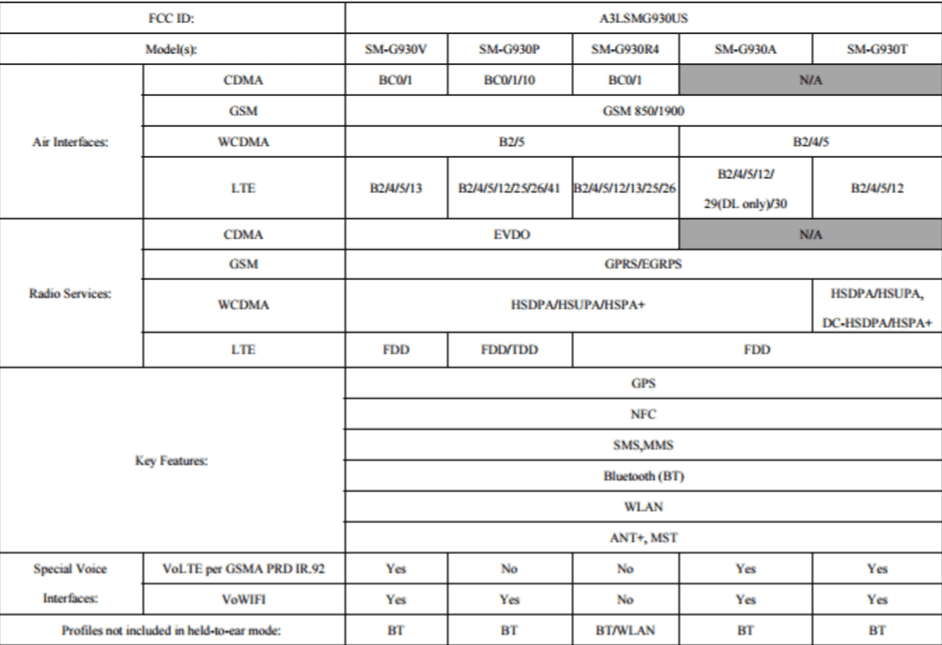 There’s also a US Cellular version carrying the model number SM-G930R4. The same prefixes are applicable for the Galaxy S7 Edge SM-G935. The Galaxy S7 and S7 Edge also support LTE Advanced bands, as show in the FCC filings.

A GeekBench test of the T-Mobile version of the Galaxy S7 showed that the device featured the Snapdragon 820 processor and scored really well. 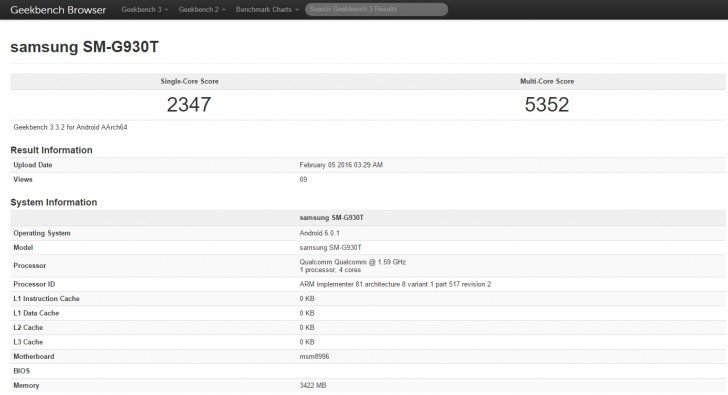 Once again, the Samsung Galaxy S7 and S7 Edge will be out on February 21.

The Samsung Galaxy S7 and the S7 Edge will be the only two flagship devices launched by Samsung this year, and here’s what the Galaxy S7 design looks like.

After several reports, leaks and rumors, we finally have the official press renders of the S7 and S7 Edge. And by the looks of it, there aren’t going to be any substantial changes in design. The new smartphones will look like the Galaxy S6.

This year, though, Samsung will launch only two variants of the S7. There were rumors that Samsung might go the Apple way and choose to release only two major flagships. Last year, the Galaxy S6 and S6 Edge had the same screen size, but there was an S6 Edge Plus with a larger display.

The devices will also be IP67 certified, which means they’ll be dust and water-resistant, but not completely.

The Galaxy S7 will have a 5.1 inch 1440 x 2560 quad HD display with Super AMOLED technology. The device will have a flat screen with slightly curved edges, unlike the S7 Edge. It will feature an always on display, which is new this year, and helps users to glance at content without having to press any button or tap on the screen. It’s supposed to use very less battery as well.

With the Galaxy S7 Edge, you can expect a slightly larger curved 5.5-inch display with the same resolution and tech as the S7. The edges would be curved for Samsungs edge feature that displays useful information to users.

It has also been reported that Samsung might incorporate something known as ClearForce, something very similar to Apple’s 3D Touch display. Oh, Samsung, when will you stop copying Apple?

Both the devices will use Samsung’s very own Exynos 8 Octa 8890 processors, with 4 powerful 2.3GHz cores and 4 1.6GHz efficient cores. It would also feature Category 9 LTE bands for super fast internet connectivity. The North American version of Galaxy S7 and S7 Edge will feature Snapdragon 820 chipsets, according to a report.

The camera on the S7 will be a downgrade in terms of megapixels, but will have a better aperture, which means it should perform better than the S6. The S7 and S7 Edge are said to feature 12 megapixels with f/1.7 aperture, compared to 16 megapixels and f/1.9 on the S6. The front camera will be the same as last years, rated at 5 megapixels.

No removable batteries this year as well. Samsung angered a lot of fans when they made the battery on the S6 of the non-removable type. The company will do the same with the S7, but has upped the capacity. The S7 will have a 3000mAh battery whereas the larger S7 Edge will have a 3600mAh battery. Both the handsets will continue to be Wireless charging compatible.

According to most reports, Samsung is said to announce the Galaxy S7 and S7 Edge before the 2016 Mobile World Congress. It is most likely that the devices will be launched on February 21st and will hit shelves sometime in mid-March.

The Galaxy S7 release date has been confirmed thanks to a new leak by Evan Blass aka @evleaks. The journalist has leaked the invites that Samsung was supposed to give out to the press and media.

As you can see from the invite, it’s another one of those Samsung Unboxed events, where the company takes wraps off their latest flagship smartphones. The number 7 is formed at the edges of the slightly opened box.

Once again, the Galaxy S7 and the S7 Edge will be announced on February 21. The event is three weeks from now and just a day before MWC 2016 kicks off. Samsung really wants to make an impression and wants all eyes on their new devices.

The Galaxy S7 and S7 Edge will be available in Black, White and Gold color variants. The leaked renders already show the Black and Gold color options. What do you think of the Galaxy S7 design? Should Samsung have changed things a bit?