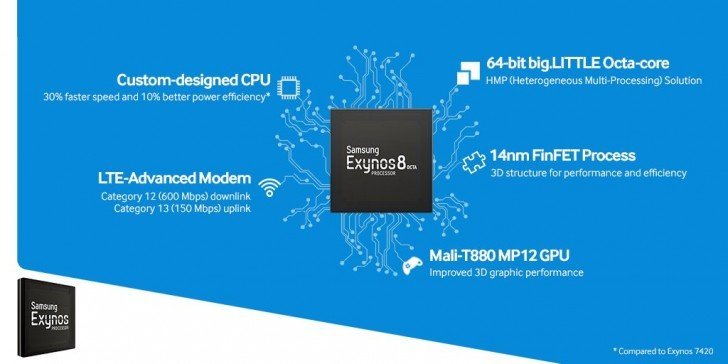 Samsung Galaxy S7 confirms Exynos 8890 for Canada. The company is coming out with two variants: one uses Samsung’s own Exynos 8890 processor and the other uses Qualcomm’s Snapdragon 820.

As a refresher, for the Samsung S6 series, Samsung was not interested in using Qualcomm’s Snapdragon 810. But for the Galaxy S7 and S7 Edge, Samsung announced last week that it will sell two different variants, one of which will use the latest Snapdragon 820.

Well, Samsung has decided to sell the two variants depending upon the region of sale, and there has been confusion over who gets what.

While US, China and Japan will enjoy the Snapdragon-powered Galaxy S7, all other global markets will receive their Galaxy S7 and Galaxy S7 edge devices with the Exynos chipset.

That means it’s the Exynos 8890 for America’s Frosted Hat.

There is an ongoing discussion in various Samsung-related forums among users from Canada and other countries about why they don’t get the Snapdragon.

Some opined that Samsung’s decision to release the Snapdragon-powered variant in the U.S. may just be because several carriers in the U.S. continue to operate extensive CDMA networks. Qualcomm’s latest chip supports the standard, while Samsung’s Exynos does not.

Who Gets A Better Deal?

Initial benchmark tests suggest that the Snapdragon variant performed slightly better than the Exynos variant, but it’s still a bit early to say which chipset will be stronger. Users are unlikely to notice any significant difference, because apart from the chipsets, both the models come with exactly the same features.

Folks in Canada can place a pre-order for the Samsung Galaxy S7 and Galaxy S7 Edge, both of which will come with the company’s proprietary Exynos 8890 series Octa-core CPU.

In case you’re wondering, users in Canada will not be able to get their hands on a Galaxy S7 that uses a Snapdragon 820 processor – at least not when they buy in Canada. The release date? It’s March 11th, 2016.