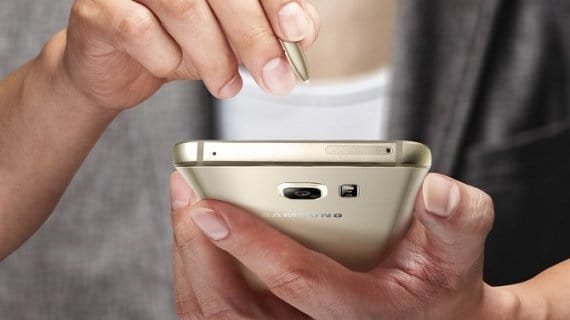 The Galaxy Note 7 benchmarks have appeared on the Geekbench website, giving us more confirmation about the variants.

According to the Geekbench Benchmark results, the Galaxy Note 7 will come equipped with Snapdragon 820 or Exynos 8893 based on regions. In the US and China, the Note 7 will come with the Snapdragon processor, whereas devices in other countries will mostly carry the Exynos processor.

The Exynos 8893 version comes with 4GB of RAM, and scores 2300 in the Single core test and 8110 in the multi-core test. Samsung might also release a 6GB variant of the Note 7.

And just like that, alleged official press renders for the Galaxy Note 7 have been leaked. It’s all out there now, in all its glory.

Leaker Evan Blass posted the press render on Twitter, which shows the upcoming Note 7 in Black, Silver, and the new Coral Blue color. His track record when it comes to leaks have been spot on, so this might be it.

If you look closely at these renders, you will notice the S Pen nicely tucked away on the right bottom corner. A slight bulge gives it away. Apart from that, the handset seems to have edges on both sides, as it has been reported several times.

Update – June 28, 2016 – As August comes closer, we’re beginning to get some more confirmations regarding the next Galaxy Note.

Firstly, the new Note will 100 percent be known as the Samsung Galaxy Note 7. Prominent mobile phone leaker Evan Blass even posted a photo of an official looking logo.

We’re not sure if Samsung will launch the Note 7 Edge or simply call it Note 7, despite it having edges on both sides.

Secondly, we now have what seem to be official specs of the Note 7. And, it will also include an Iris scanner. Evan Blass is once again behind the specs leak.

Other confirmed specs of the Note 7 include, a 5.7 inch QHD SAMOLED display, 64GB of internal storage, 12MP Dual Pixel camera at the back, 5 MP at the front, full IP68 protection, and a new Blue color.

Samsung will use the Snapdragon 821 or their own Exynos 8893 chipset on the Note 7, and it will be coupled with 6GB of RAM. Another weibo leak is also in line with these specs, thereby pretty much confirming them.

Samsung May Skip Note 6 and Launch Note 7 Instead

Update – June 17, 2016 – As mentioned in a previous update, the next Galaxy Note will carry the 7 badge, in line with the latest Galaxy S7 and the S7 Edge. According to a leaked image, Samsung will launch the Galaxy Note 7 or the Note 7 Edge on the 2nd of August. 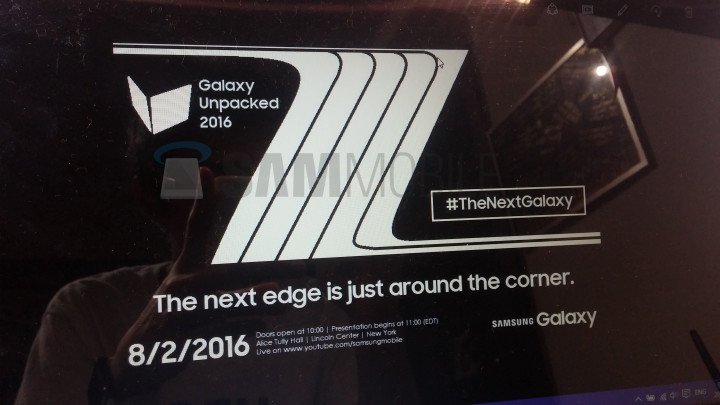 The above image was sent to SamMobile and it shows 5 lines that form the number 7. And it also says that, ‘The next edge is just around the corner’. Therefore, it could mean that Samsung is going full edge on the Note 7, as rumored before.

Update – June 6, 2016 – According to a report, Samsung is going to skip the Note 6 and go straight to the Note 7. Why are they doing this? Well, apparently, people will think the Galaxy Note 6 to be an older device due to its numbering now that Galaxy S7 and S7 Edge exist.

Also, several leaks have emerged since that show that the new Galaxy Note 6 or 7, whatever it’ll be called, will have edges on both the front and back. This means that the device will be easier to hold. Samsung has done this with the Galaxy Note Edge before, and it looks like the edges are coming back, and front.

Update – May 2, 20167 – Samsung recently showcased a new 6GB RAM chip at a Mobile Solutions Form event in Shenzhen, China. 6GB of RAM isn’t really new in the smartphone industry, but Samsung’s RAM is manufactured using a 10nm process. This makes it really small, improving performance and efficiency as battery used is lesser

It is possible that Samsung may include this new 10nm 6GB LPDDR4 RAM on the Galaxy Note 6.

Update – May 12, 2016 – According to prominent mobile leaker Evan Blass, Samsung is all set to announce the Galaxy Note 6 in mid-August.

By doing so, Samsung will once again have an advantage over the iPhone 7 and 7 Plus, as Apple will only be releasing those in September.

Evan Blass is known to be best at what he does and his leaks have always been very accurate. The Note 5 was also launched in August last year, so the timing does seem right. According to Blass, we can expect the Note 6 during the week of August 15 this year.

Update – April 13, 2016 – New rumors have surfaced regarding the Galaxy Note 6 that suggest that the device might get a more powerful processor, instead of the Snapdragon 820.

The rumor suggests that a more powerful 64-bit Kryo 2.6Hz Snapdragon 823 processor will be used instead. It’ll be coupled with the Adreno 530 GPU and whopping 8GB of RAM.

This is all still speculation though, so don’t get too excited. We’re still a few months away from seeing the Note 6.

Update – March 30, 2016 – Several rumors and reports on the upcoming Samsung Galaxy Note 6 have been surfacing lately, and the latest one says that it’ll be released in July 2016.

The Note 6 will be the successor to last years Note 5, and is part of the phablet lineup that Samsung has been selling for the past few years. It has been a great success for the company, as consumers have found the phablet to be pretty useful.

Samsung sells the device as a productivity device and thanks to the large screen and the S-Pen, it does the job very well. The Note 5 featured top of the line hardware and an excellent camera, so, we will most likely see the same thing happen with the Note 6.

According to leaked reports, the Note 6 will be well equipped. Here’s what the Note 6 specs may look like:

Samsung released the Note 5 in August 2015, so a mid summer 2016 launch doesn’t sound so bad. Now that the Galaxy S7 and S7 Edge are available, their next goal is to release the Note 6 to the consumers.

Another new report suggests that Samsung could released the Galaxy Note 6 as soon as July. Not only that, but the new phablet will also come with Android N out of the box. This report comes from a Korean website called The Bell, who’s heard from sources about the early release date.

You’ll probably have to take this with a pinch of salt, as it’s hardly even been ten months since the launch of the Note 5. Regarding the Note 6 specs, expect improved battery life, cameras and hardware. We’ll have more for you when there’s more info regarding the Galaxy Note 6.