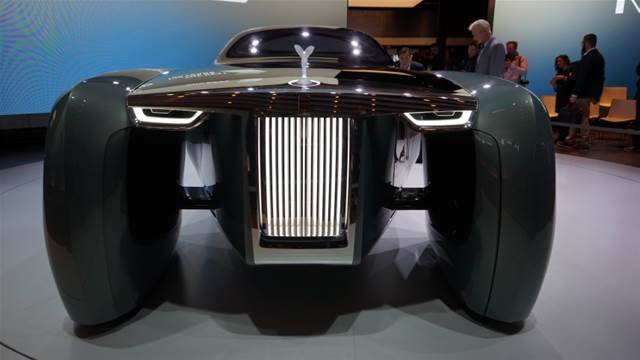 Rolls-Royce VISION Next 100, a striking looking car that looks like a Batmobile, with a silk throne and without a steering wheel, was presented at a spectacular event at London’s Roundhouse.

Expected to be in production by 2040, this emission-free AI-controlled concept car is a Batmobile lookalike and the future of ultra-luxury mobility. It blends in the old tradition and the new tech-filled autonomous future.

Yes, one more driverless car. In place of chauffeurs, this Rolls Royce has Eleanor, a new AI like Siri, named after the woman the Rolls-Royce Spirit of Ecstasy was modelled on.

Eleanor is said to be hyper-intelligent with the ability to act as both our chauffeur and personal assistant – transporting you to places safely and even booking a table for two.

The new Rolls-Royce VISION Next 100 is already turning heads with its iconic grill and a long, flowing bonnet that effortlessly blends into the windscreen. At 5.9 metres long, one of the most striking features of this car is its wheels that are enclosed and hoist the car up like a catamaran.

As a zero-emission vehicle, the car doesn’t have a huge V12 internal combustion engine but Rolls-Royce has retained the long hood up front.

According to Giles Taylor, the design director:

“We didn’t want to give up on the long bonnet as it’s part of the Rolls-Royce DNA. We wanted to revisit the lines of some our beautiful 1930s cars, so inside this area is bespoke luggage [that reveals itself beyond a flap behind the front wheel] and at just the right height for the valet to collect.”

One of the three parts of the concept to offer an effortless journey is – the roof that opens. The side-hinged roof opens like a grand piano alongside the Rolls’s rear-hinged door, and light is projected to give an amazing ‘red carpet’ effect.

The rear bench seat is called the ‘sofa,’ where two people can stretch out in comfort facing an infotainment screen that takes the place of the traditional dashboard. This is possible as no driver’s seat is required in fully autonomous mode.

Rolls-Royce says they haven’t used a uniform template to make this car, and in the future they will be allowing customers to customize every aspect of the car, from the silk of the interiors to the length of the car, the skins to the seating configurations.

Such high level of customization may be possible because Rolls-Royce is embracing modular construction and materials like carbon fibre and 3D printing.

Taylor quotes the co-founder of the company, Sir Henry Royce, “Take the best that exists and make it better. When it doesn’t exist, design it.”

Expected to be in production by 2040, Batmobile-like Vision Next 100 from Rolls Royce is the first true concept car in the company’s 112-year history.