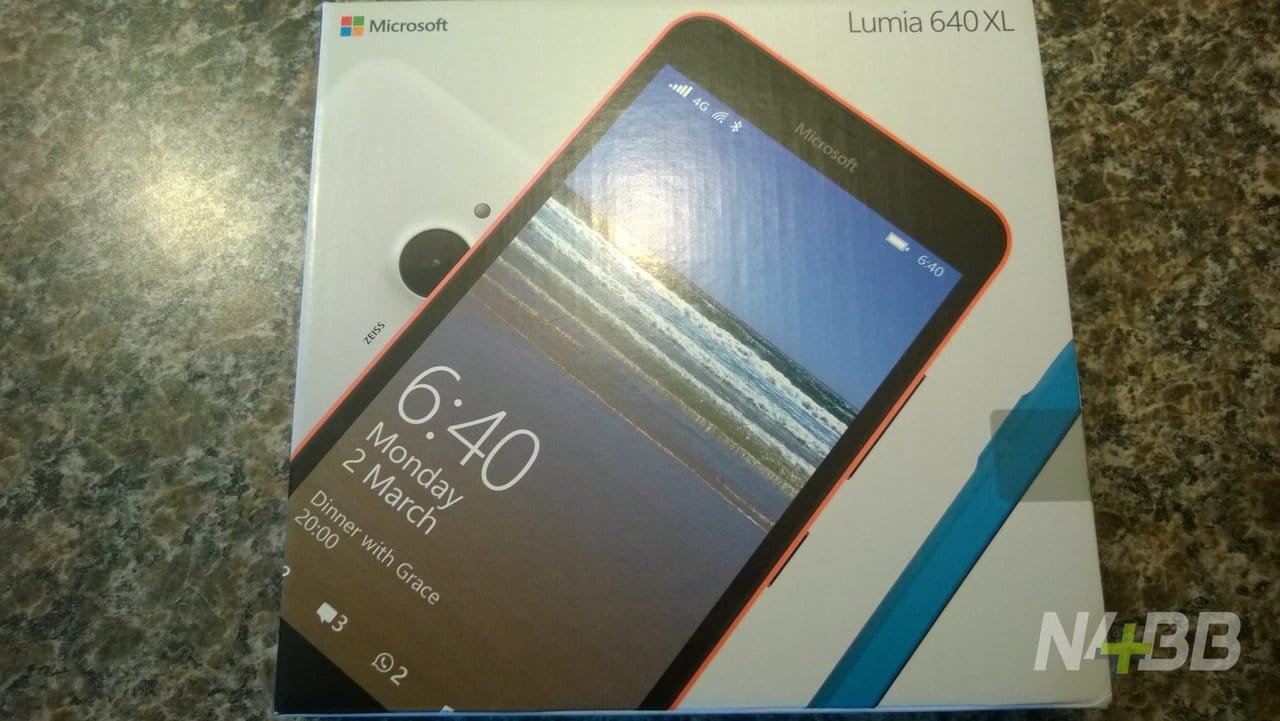 Microsoft’s value line has gone phablet. As the “XL” in the name implies, the Lumia 640 XL is a blown up version of their entry level 640 series phone. But bigger size means better hardware, seeing a slight boost in general specs over its smaller cousin. What the Lumia 640 is, is a fantastic entry level phablet with good speed, adequate power and exceptional battery life. What it isn’t is a powerhouse with loads of memory. It does have an expandable MicroSD card slot, and a removable battery, which do compensate for some high end shortcomings. 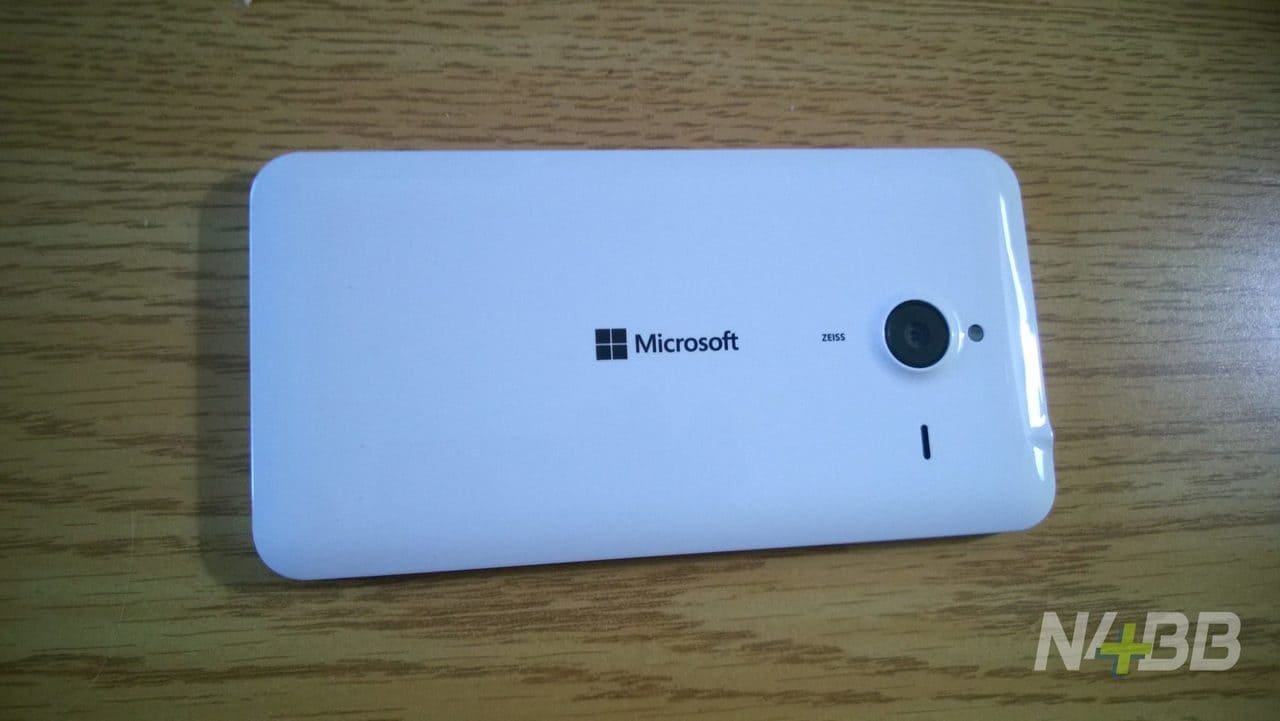 Microsoft’s Lumia 640 XL is big. 5.7 inches of screen big. Larger than nearly every other phablet out there, thanks to a bezel surrounding the screen. Regular phone users will have to get used to its size. Microsoft opted to encase this Lumia in plastic, not metal, which cheapens the feel slightly. Plastic does feel high quality, however, and durable. As a trade off, the Lumia 640 XL feels light in your hand. Grip feels a bit slippery on the smooth plastic. Gone is the camera quick button that I’m used to on my old Lumia 920, in favour a simplified button design. In fact, the exterior of the Lumia XL is extremely simple. A micro USB charge port on the bottom, two buttons on the left side, and a headphone jack are all that don the exterior edge. A speaker, LED flash and camera are housed on the back. 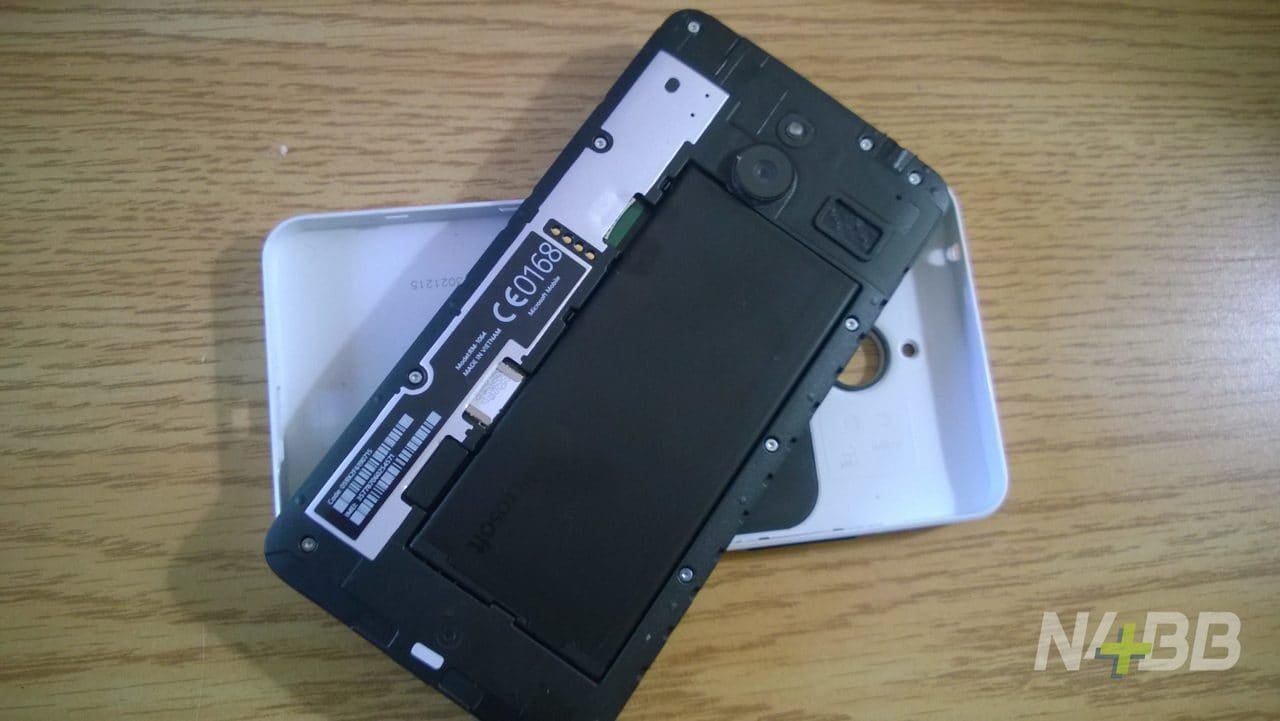 Battery access on the Lumia 640 XL is a bit complicated. You have to get a fingernail behind the one piece plastic bezel, pry, then pop the plastic from the back. Once you get it started, it comes off easy. Sheer size gives quick access to battery, SIM card and MicroSD card slots once inside. You’ll note as missing from the bottom are designated back, home and search buttons. These are now integrated into the OS, vanishing to the bottom when the phone is off or running an app. It can be a bit of a small battle coaxing these buttons back up. 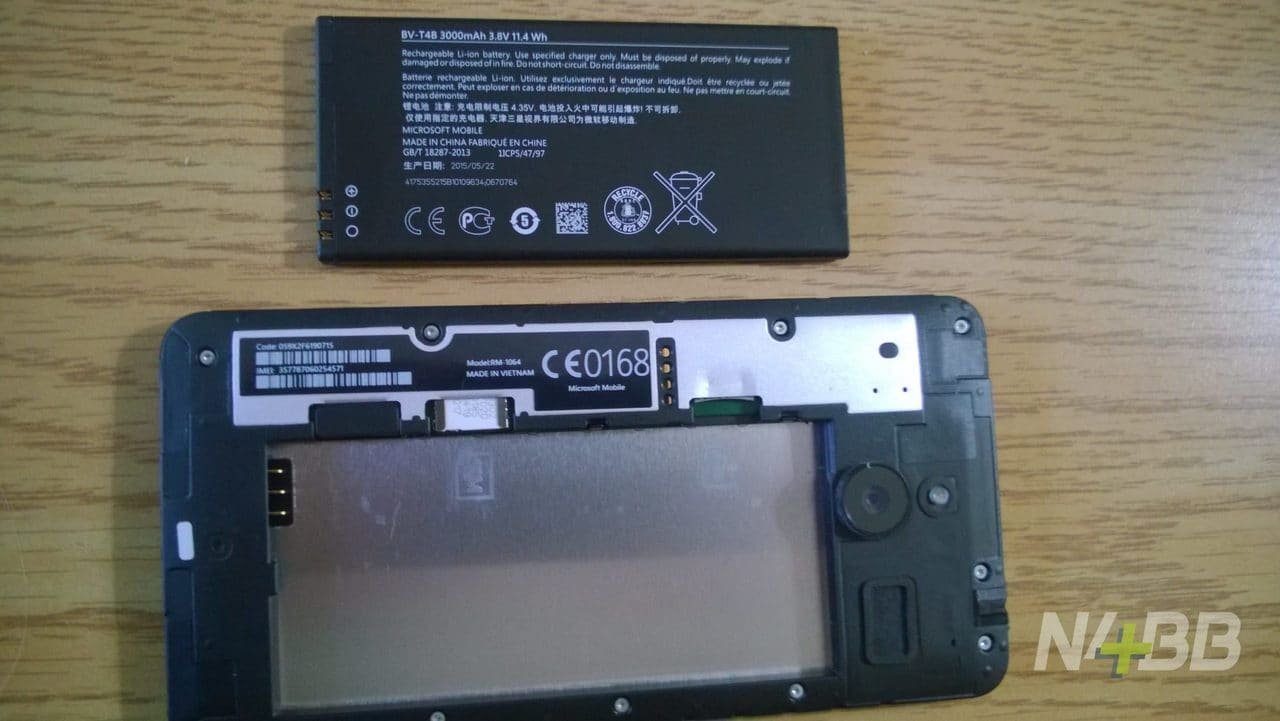 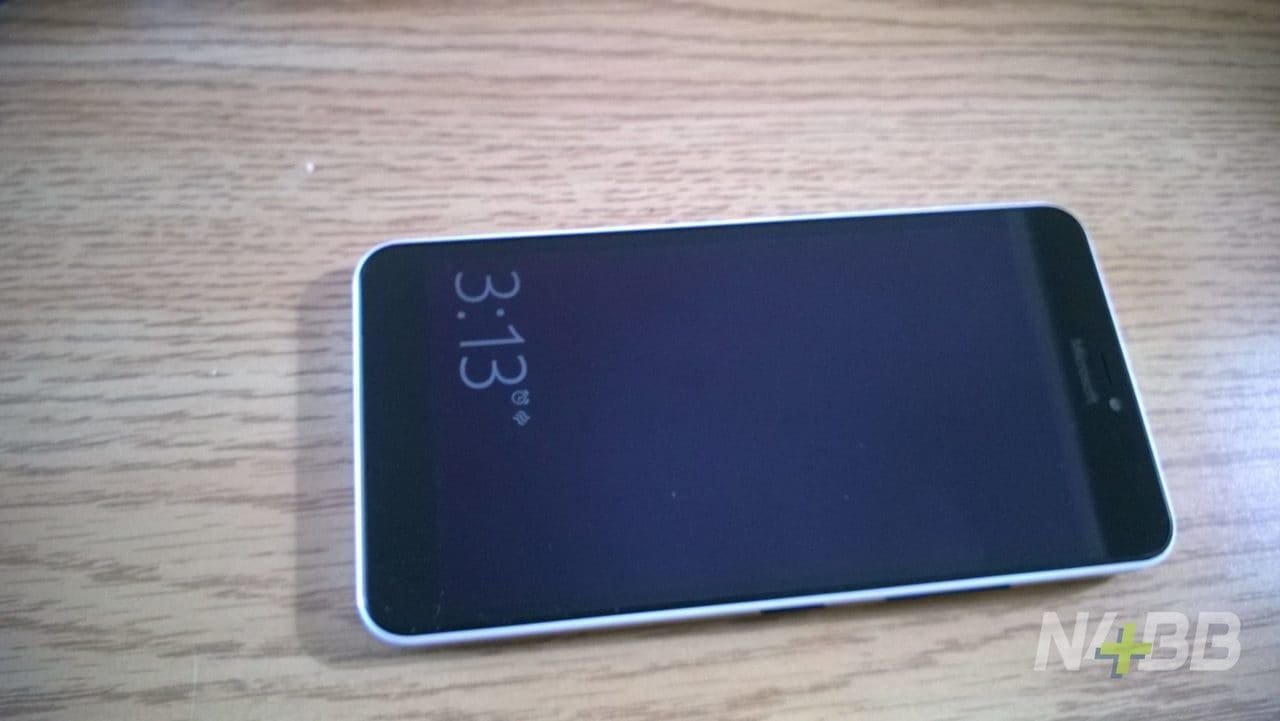 Screen size is comparable to other phablets on the Lumia 640 XL, but resolution isn’t. This Lumia shows its value with a 720p resolution main screen. At 5.7 inches in size, pixel density is a modest 259ppi. Touch is responsive, though rarely a bit inaccurate when it came to smaller URLs or buttons. We really enjoyed reading on the Lumia, despite having a lower resolution than competitors. All that said, its screen is still fantastic to look at. Technically, this LCD multitouch screen isn’t as visually stunning as AMOLED screens on offer, but it does come at half the cost. Featuring Gorilla Glass 3, it has a proven technology protecting the screen. Typical users won’t likely notice the difference. 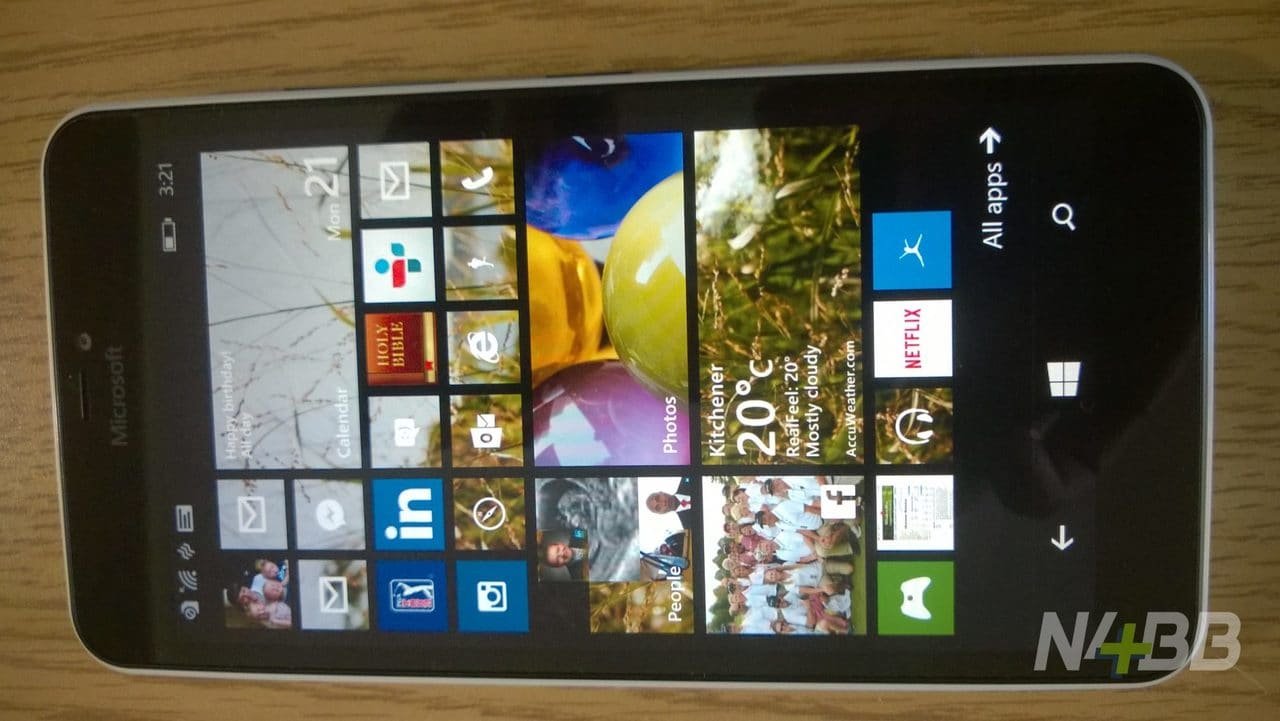 Sound on the Lumia 640 XL comes via a single speaker mounted to the rear. Music quality is acceptable, with a good level of volume capable at or near maximum. Call quality on speakerphone is also acceptable. Both participants can clearly hear the other. Call reception using the handset is good, with some stereo effects from those whose phones support it. I’m not sure where the microphone is on this phone, but no complaints from people receiving calls.

Playing music on headphones was an improvement over other Lumia devices. Whereas sound would be quieted or muted, the Lumia 640 XL produced rich, full sound via headphones. Even a pair of in-ears was surprisingly well balanced. Calls via bluetooth were also clear 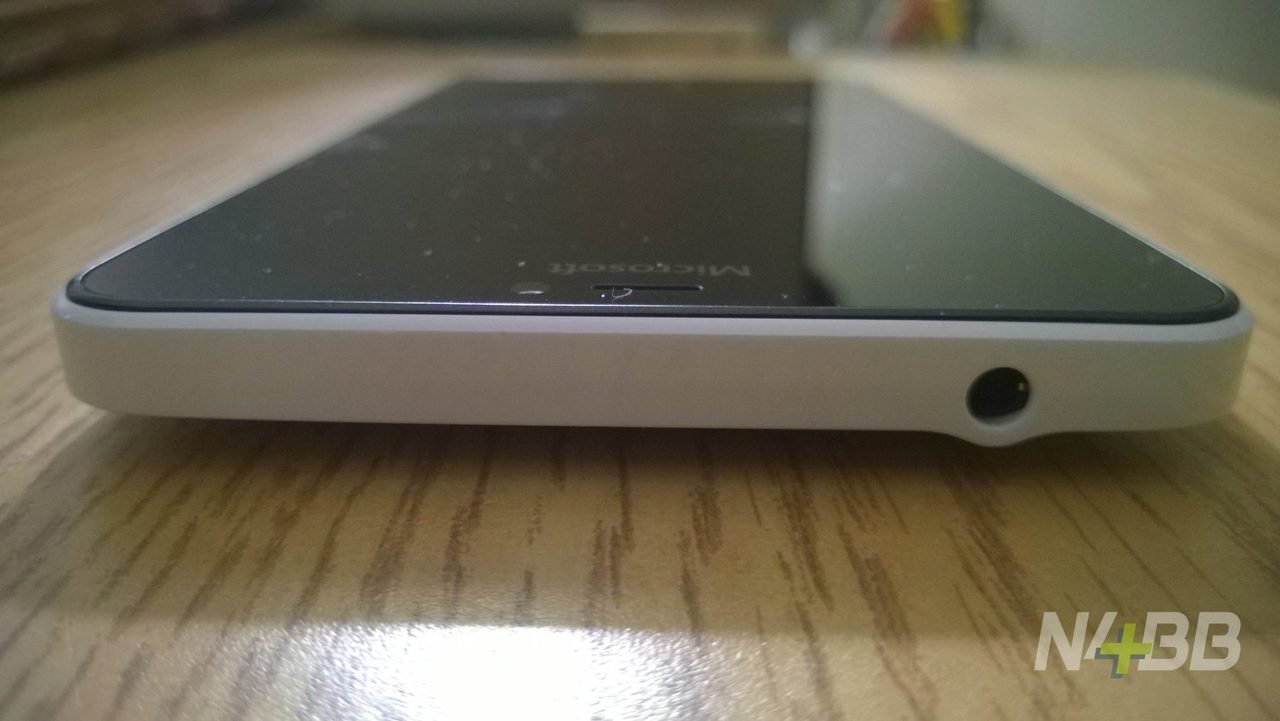 Lumia has a whole suite of photo friendly software to compliment their cameras. Lumia Camera lets you take and edit images on the fly, including “living images”, a feature we’ve seen recently announced on iOS devices. We had a hard time finding situations that really took advantage of this. There are a whole host of other software that assists in creating the best images: panoramic, selfie, movies, cinemagrophy. Lumia Creative Studio is a powerful little app giving amateur photographers a nice selection of post processing options.

I missed the dedicated photo quick launch button on the exterior. Camera is launched by sliding the top menu down, then selecting the camera icon

Personally, the best part of a Microsoft phone is the software. Running the latest Windows 8.1, Lumia 640 XL takes full advantage its hardware. You have access to a full suite of Office software, giving you the productivity of your office desktop. A large screen actually makes working for short periods of time on productivity documents rather easy. There is a built in way to segregate your work from play, so corporate IT policies don’t completely invade your life. Microsoft’s own swipe keyboard works well, though reaching the width of this phone with a single thumb was a strain at times. Live tiles on the start screen are definitely what sets Windows 8.1 apart. Tiles rotate to display quick information from apps who support the technology. Social media, weather, email apps all give quick updates on live tiles. Having a live account is where Microsoft 8.1 really shines. Full cloud storage, backup, XBox integration really bring this phone into the Microsoft ecosystem. Windows 10 users take full advantage of this integration.

Windows phone also now features Cortana, Microsoft own personal assistant. Cortana works a lot like software its designed to compete against. Asking voice questions typically got the responses we was going for. No real initial configuration was required. Cortana integrates really well with your live accounts. Managing contacts, calendar entries or messages was surprisingly well done with Cortana. Software also learns, which minimizes the amount of coaxing you have to giver her to accomplish the same tasks. As a whole, we didn’t use Cortana much day to day, but there is a lot of promise in what we did.

One of the expectations going into our test was that an entry level phone would have entry level performance. With a Snapdragon 400 chipset running a quad-core 1.2Ghz Cortex A7 CPU and Adreno 305 GPU, this phone is a bit of a slouch compared with the latest on offer from competitors. With only 8Gb of on board memory, you find yourself running out fast without an SD card. To its credit, the SD is expandable to 128Gb, more than enough for heavy users. On paper, the Lumia 640 XL isn’t stunning. In use, however, we found the phone very snappy. The Microsoft OS is so optimized that menus and apps ran extremely quick. Even with applications in the background there was little noted lag from the GUI or active app. It was a pleasant surprise to find a phone at this price point so zippy, despite lower end specs.

Battery life is by far and above the best thing going for the Lumia 640 XL. A 3000 mAH battery powers the Lumia 640 XL, but it seems like a lot more. Microsoft claims the 640 XL gets 24h talk time in 3g, and we don’t disagree. In fact, during our tests we struggled to consume more than 60% of the battery in a 24 hour period, even with extremely heavy use. With moderate use, you can comfortably expect to go two days between charges. Running games, video, music and WiFi intensive applications don’t make the dent in battery life they do in other phones we’ve tested. Low spec in the Lumia 640 XL help keep battery consumption down.

Microsoft has packed an impressive amount into this entry level phablet. It doesn’t stack up well against powerhouses like the Galaxy S6 Edge+ or iPhone 6S Plus on paper, but it also comes in at more than half the cost. If you’re looking for a well performing phablet on a budget, Lumia 640 XL delivers a great deal of value. Battery life alone is worth the price of admission.