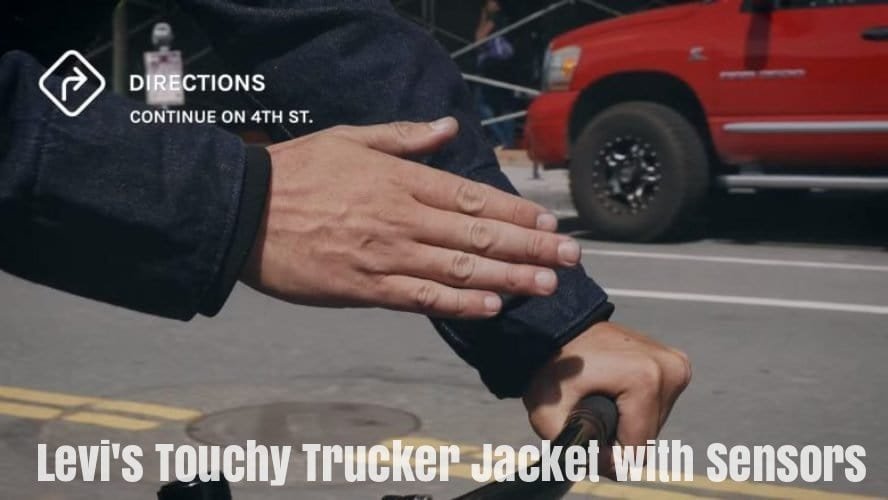 The biggest name in the tech world and a world famous master tailor come together to create the latest in wearable tech – Project Jacquard – a Commuter Trucker Jacket with sensors in the sleeve that control your smartphone. Swipes and taps on your jacket sleeve is all it takes.

This was revealed at this year’s Google I/O event. Levi’s plans on releasing this wonder denim jacket as early as 2017.

The jacket has sensors woven into the fabric that gives you the utmost in convenience when operating your phone.

The Levi’s Commuter Trucker Jacket with sensors, was developed in collaboration with Google’s Advanced Technologies and Products (ATAP) division, which has for years been working on integrating sensors into clothes.

This high-tech denim jacket from Levi’s is made with conductive yarn woven into the fabric to create a ‘patch’ in the jacket that can be controlled with touch.

The jacket cuff is designed to have a detachable and flexible smart tag that curves around the cuff and connects the sensor in the jacket with your smartphone.

At last year’s Google I/O event, Google introduced this technology that it called “Project Jacquard,” which focuses on integrating sensors into fabric.

A demo on May 20, during this year’s Google I/O developers conference had an ATAP team member wear the jacket and control music playback just by swiping down on the sleeve of the Levi’s denim jacket.

By tapping and swiping on your jacket sleeve, you will be able to silence calls, get an estimated time of arrival, get directions and a whole lot more. There will also be a companion app for your phone that will allow you to manage various controls and features on your phone.

And the best thing about the Trucker Jacket from Project Jacquard is – it’s not just wearable, but washable technology. You just have to remove the smart tag and it’s all ready for a spin in the washing machine, again and again.

“This is technology you can wash,” said Paul Dillinger, vice president of global product innovation at Levi Strauss & Co.

As of now, we have no news on the price of the jacket which is expected to be launched in 2017.

Watch the video below to see Levi’s Commuter Trucker Jacket from Project Jacquard in action: