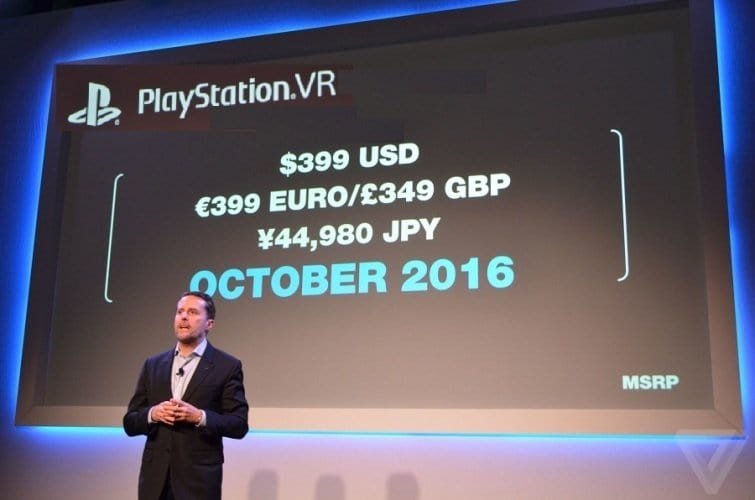 Sony’s much-anticipated virtual-reality headset now has a launch date and a price tag, along with many other details revealed by Sony at the Game Developers Conference in San Francisco.

With this pricing, Sony is establishing PlayStation VR as the mass market VR headset, making it easy for anyone looking to get into VR to do so.

Pre-orders are open in the UK and the PS VR is selling like hot cakes. Some sellers are selling it cheaper than the recommended price.

Some websites have listed the date of release as October 14, but this hasn’t been confirmed by Sony.

A short keynote at the annual Californian tech fair unveiled the attractive PlayStation VR package. It includes a free download of Play Room VR, a multiplayer collection of six mini-games that offers a family gateway into virtual reality, where four players on the couch are pitted against one player using the headset.

The headset comes with stereo headphones and a good sized processor unit that mirrors the exact VR experience on your big TV, for others to enjoy.

A Cinematic mode gives you the ability to show off cinema-sized films and 360-degree photos on a 225-inch virtual screen, giving you a personal movie viewing experience at a distance of just two and half meters from your face.

Reasons for shifting the release date to October from its originally intended date in the first half of 2016 could be because Sony needed more time to polish up the games or because summer isn’t always the best time to try any indoor gaming, even if it’s VR.

Here’s what you’ll find in your PlayStation VR box:

If you notice the display above showing Sony’s final PlayStation VR setup, you would see the PlayStation Camera. This is a required accessory, and while it’s displayed here, it doesn’t come with the VR set – it is sold separately.

Sony reasons that many people already have a PlayStation camera. For those who don’t own one, you have to set aside an additional $59.99 to pay up for the camera. (but you may find it on sale somewhere).

Sony Move controllers, which are required for some content, also don’t come with the PlayStation VR package. Sony is said to be releasing PlayStation VR bundles and they might be included in some of them, but we don’t know the exact details yet.

Around 50 of the more than 160 games in development are expected to be out before the end of 2016, including popular ones like Guerilla Games’ RIGS, Ubisoft’s Eagle Flight and of course Sony’s own The London Heist, The Deep and Street Luge demos.

PlayStation VR is open for pre-orders in the UK (we’ve given the prices in GBP), and there are sellers offering the PS VR for less than the recommended price.

GameSeek (via Hot UK Deals) is offering the VR device for £339.75. They also have a package deal where you can get PlayStation VR and PlayStation Camera for £380.07. You will also find the release date listed on their website as October 14, but Sony hasn’t yet announced the exact date.

Amazon is also taking pre-orders online and they are selling at the recommended price of £349. Their initial stock for pre-orders sold out within 10 minutes of becoming available. Those who managed to place their order within those 10 minutes are expected to receive their devices on launch day in October.

Now Amazon is taking pre-orders again, but there are no details of when these buyers will get the headsets – which could mean that the second-set of pre-order customers might get their PlayStation VR sets after the launch date. Amazon is limiting pre-orders to one per customer, per address.

GAME is yet another place you can pre-order your PS VR either in-store or online. Their website lists the price as £349.99. A package deal of the PS VR and the Camera costs £389.98. In-store buyers will have to make a deposit of £100 first.

Pre-orders are also available from GameStop UK and Argos is all set to sell PS VR, although they are still in the process of registering customer interest at the moment.

If you just want to walk into a store and pickup your PlayStation VR, obviously it will be available from other retailers after the launch.

Added up, Sony’s PlayStation VR is significantly cheaper than the Rift and Vive, and offers value for money.

Sony sums it up nicely: “If you just talk about the high end quality, yes. I would admit that Oculus may have better VR. However, it requires a very expensive and very fast PC. The biggest advantage for Sony is our headset works with PS4. It’s more for everyday use, so it has to be easy to use and it has to be affordable. This is not for the person who uses a high end PC. It’s for the mass market.”

In short – the mass market cares more about cost and ease of use. Sony is offering that choice with the PlayStation VR.