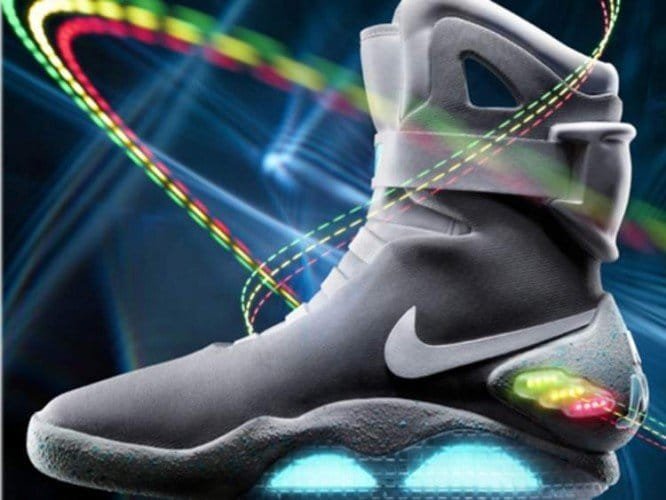 Nike’s ‘Back to the Future’ Self-Tying Shoes are Here, Cristiano Ronaldo Is First To Try

The sneakers with laces that tied themselves up with the touch of a button in Back to the Future II inspired yet another effort by Nike, turning the science fiction prediction of self-tying shoes into reality.

The Nike HyperAdapt 1.0 self-tying shoes were unveiled today on the feet of footballer Cristiano Ronaldo. He is the first athlete in the world to try Nike’s latest Marty McFly-inspired footwear.

In the 1989 film, Marty McFly puts on a Nike self-lacing shoe and says, “Power laces, Alright!”

In 2015, Michael J Fox, the actor famous for his McFly role, was given the Nike Mag prototype pair. The self-tying shoes use a two-part system: they tighten laces automatically around the foot, in the lower part of the shoe, and also straps the upper part, around the ankle. They were only available via auction in spring 2016.

Today Nike has announced that the HyperAdapt 1.0 will be available to the general public before Christmas.

A sensor in the heel detects when the shoes are put on and automatically tightens up the laces. The self-tying shoes will also have buttons on the side allowing the wearer to make adjustments, making the shoes tighter or looser.

“When you step in, your heel will hit a sensor and the system will automatically tighten,” explains Tiffany Beers, Senior Innovator at Nike and the project’s technical lead. “Then there are two buttons on the side to tighten and loosen. You can adjust it until it’s perfect.”

According to Nike, these innovative self-tying shoes could be useful to athletes, allowing them to make “swift micro adjustments,” as their feet undergo a great deal of stress during competition.

He said, “Wouldn’t it be great if a shoe, in the future, could sense when you needed to have it tighter or looser?”

“That’s where we’re headed. In the future, product will come alive.”

The cost of the trainers is not yet known.

According to the Nike website, HyperAdapt 1.0 will be available in three colors, and only to Nike+ members beginning Holiday 2016.

Here’s a video of Cristiano Ronaldo trying on the new self-lacing Nike HyperAdapt 1.0: