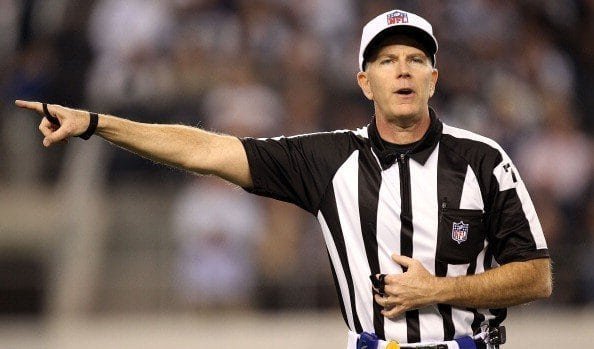 Professional football is still the most popular sport in the United states and the National Football League (NFL) is the king when it comes to popularity. As the popularity grew, salaries for NFL players and referees have increased substantially.

An experienced NHL referee or linesman can easily double or rarely trible that amount.

Baring in mind that being a NFL referee is not a full-time job, most referees make way more from their day jobs.

If you are considering it as a career and make your way to become a NFL referee, you could be a well paid part-time official without a restriction to making less than 50% your annual earnings from refereeing NFL games.

What is the average ‘Salary Per Match’ for a NFL Referee in 2016?

Update: Other salaries based on per match.

#1 : Umpire : Per Match Salary ($2,500) :
He stands stands behind the defensive line and linebackers . His duty is to observe the blocks by the offensive line and defenders and to look for illegal blocks and counts all offensive players.

#3 : Head Linesman : Per Match Salary ($1,200) :
He stands on the one end of the line , his duty is to check for the possible offsides, encroachment and other fouls before the snap.

#4 : Line judge : Per Match Salary ($1,000) :
He assists the head-linesman on the other end and responsible for the action near his sideline for counting offensive players.

#5 : Back judge : Per Match Salary ($1,000) :
He is standing deep behind defensive secondary in the middle of the field , judging the action of running backs, receivers and nearby defenders.

#6 : Side judge : Per Match Salary ($1,000) :
He stands near the sideline on his side of field, judging the action of nearby running backs, receivers and defenders.

#7 : Center Judge : Per Match Salary ($1,200) :
His duty is to make decesion nearby the sideline on his side of the field, judging the action of running backs, receivers and defenders .