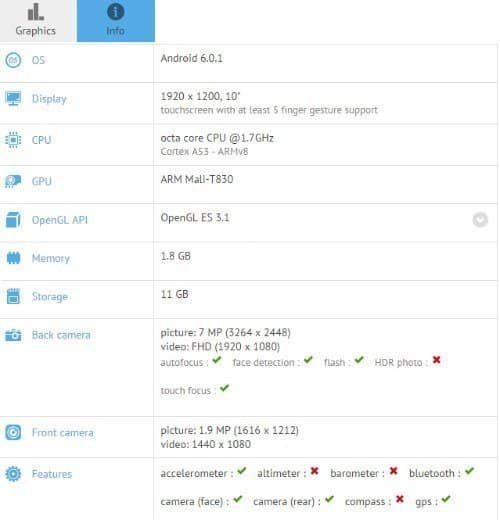 Heads Up, a New Samsung Tablet with Octa-Core and 4G: Samsung SM-T585

A new Samsung tablet is on the horizon. Samsung listed a new tablet on a popular benchmarking site today and here we are with the news of what you can expect from Samsung SM-T585.

Fortunately, the site has revealed all the device’s most important specs.

As always, Samsung has a spate of Android tablets on their way to the market this year too, and SM-T585 is one of them.

While we have no news on what lineup the new Samsung tablet falls under, based on the specifications, it’s certainly going to be in the mid-range.

Based on the specs listed on the benchmark site, the Samsung SM-T585 will have with the following:

This new Samsung tablet has pretty much all the necessary connectivity options. It comes with Bluetooth, Wi-Fi, GPS and 4G connectivity thanks to the Exynos chipset.

However, at this point, we have no further news on the tablet design or the type of battery used, which are the two most important things that users would like to know.

Samsung’s choice of branding for this new tablet is also not yet known. It might be an entirely new Galaxy Tab E or a 10-inch Galaxy Tab 5. Either way, it will run an Android 6.0.1 Marshmallow. Being a mid-range option, we can only hope that it would be priced reasonably.

We’ll keep our readers updated in the coming days as we get more information about SM-T585, the new Samsung tablet.