If you enjoy watching Netflix on your Android tablet or smartphone and you’ve been waiting eagerly for another update, you’ll be pleased to hear that the latest update for the Netflix Android app – Netflix 4.0 build 5523 – is now available.

The news was first reported by Android Police yesterday evening.

The Netflix app is one of the most downloaded Android apps, but users have long been resigned to a love-hate relationship with it. The last time a major update was available, it was issued to coincide with the release of the new Chromecast, and it was quite a disappointment.

So it’s fair to ask, was this latest update worth the wait?

The last update to the Netflix Android app had announced that users would soon be able to call Netflix Help directly from the app, provide they give the microphone permission. However, this functionality doesn’t seem to have been included in the latest update. In fact, other than the usual cryptically named “bug fixes” there is only one major change to the app that is immediately obvious: a widget which you can add to your Android device’s home screen.

The widget does look quite eye catching, and it’s possible to resize it to your liking with your phone launcher’s resizing tools. Unfortunately, however, it seems like it’s mostly a cosmetic addition. The widget displays only “featured” films and TV shows, and tapping on them will only take you as far as the profile page for that movie or show. 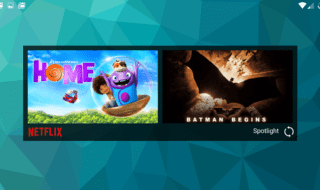 Critics haven’t taken the Netflix mobile app into consideration too well, and there’s already a few reviews on the Google Play store complaining that it’s buggy and useless. Then again, many Android widgets are primarily cosmetic, so this is nothing new.