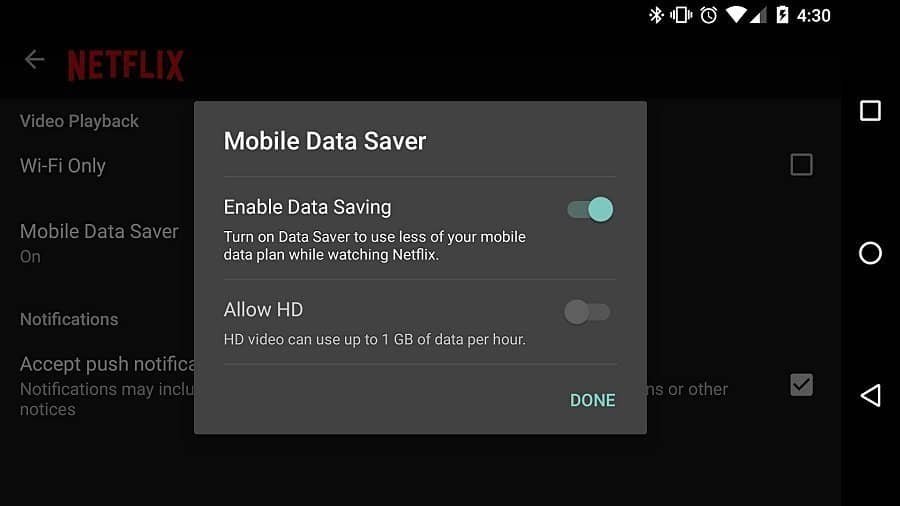 Netflix is launching a Data Saver feature for mobile apps. The company has been testing this feature in its settings to limit the app’s bandwidth usage on a data connection.

Its is aimed at giving you increased control over your data usage by letting you stream more video while using less data, making sure you don’t end up paying substantial overage charges.

Data Server will be in operation from May, according to Netflix’s blog post.

The data saver feature will provide members with more control over their data usage when streaming on mobile networks, allowing them to either stream more video under a smaller data plan, or increase their video quality if they have a higher data plan. We’re on track to make it available to members sometime in May.

But in the meantime, the company has been reducing the default bitrate to 600kbps in order to help users stay under their data caps.

Netflix has been implementing default bitrate caps on carriers, to protect their members from overage charges when they cross their mobile data caps, and the company said that it believes data capping is bad for consumers.

According to Netflix, T-mobile USA and Sprint have always had consumer-friendly policies, where customers are not automatically charged extra fees for exceeding their caps. They have the option to purchase more high-speed data or make do with slower speeds the rest of the month; the choice is left to their customers.

Netflix is happy that their members have no issue with bitrate capping, as many of them struggle to stay within their mobile data cap.

The company’s research revealed that members don’t expect or need the same resolution on their cell phones as they get on their TV screens.

The new Data Saver feature could solve a lot of these problems. It will give Netflix members the choice to adjust their data consumption settings based on their video preferences and also take into consideration the data overage charges by their ISPs.

We will be getting more information as the launch date for Netflix Data Saver feature gets closer.