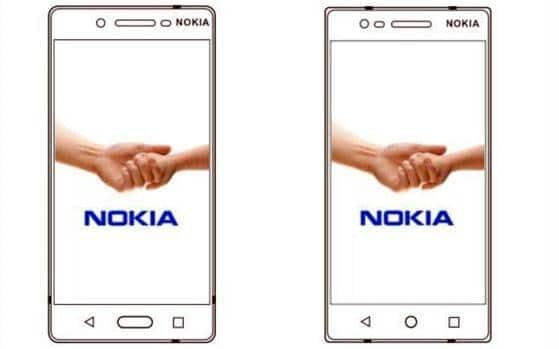 Are you one of those Nokia’s sturdy mobile fans who is eagerly waiting for the Finnish company to get back to the Smartphone market? Here is a good news! Looks like the yesteryear mobile giants are gearing up to get back into the flagship world. Rumors suggest that Nokia will be bringing us two new mid-range smartphones. The two mid-range smartphones will be a part of the Mobile World Conference 2017. Recent leaks on the internet consist of two live images and some concept diagrams of Nokia’s upcoming smartphone models.

According to the reports by TheAndroidSoul, a Chinese tipster leaked two images of a firmware build. Reports suggest that the image could possibly belong to the Nokia E1 model. Recently a Taiwanese publication Digitimes also reported that the company would launch four new smartphones excluding the D1C model. These phones are scheduled for launch in the second and third quarter of 2017. The report also suggests that Nokia may not launch for new models, but two models with different RAM and ROM variants.

The upcoming models may sport a display size between 5 inches and 5.7 inches reports PlayfulDroid. Nokia will bring a full or a Quad High Definition resolution for the display. Nokia has also partnered with LG, CTC, Innolux and Foxconn for the supply of display panels. The smartphones will also come with Android 7.0 Nougat OS out-of-the-box. It will be powered by Snapdragon processor in the 600 series. The phone will also sport a 4GB RAM and a basic internal storage of 64GB. Apart from these mid-range smartphones, Nokia may also bring us a high-end flagship device sporting a standard fingerprint scanner on the home button.

Price and Release Date Of The Mid-Range Nokia Smartphones

We can expect the phone to reach as early as Feb, 2017. HMD distributed Nokia D1C may be launched at the CES event in Jan. 2017. You can expect a powerful 6GB RAM and 23MP Rear Camera in the upcoming D1C flagship model. Reports suggest that the flagship will run on Snapdragon 835 SoC processor. On the other hand, the mid-range smartphones might fall in the $150 to $200 price range. However, we have not received any grounded information from Nokia or HMD in this regard.

It is always fun to munch on a few rumors. However, let us take these with a grain of salt!