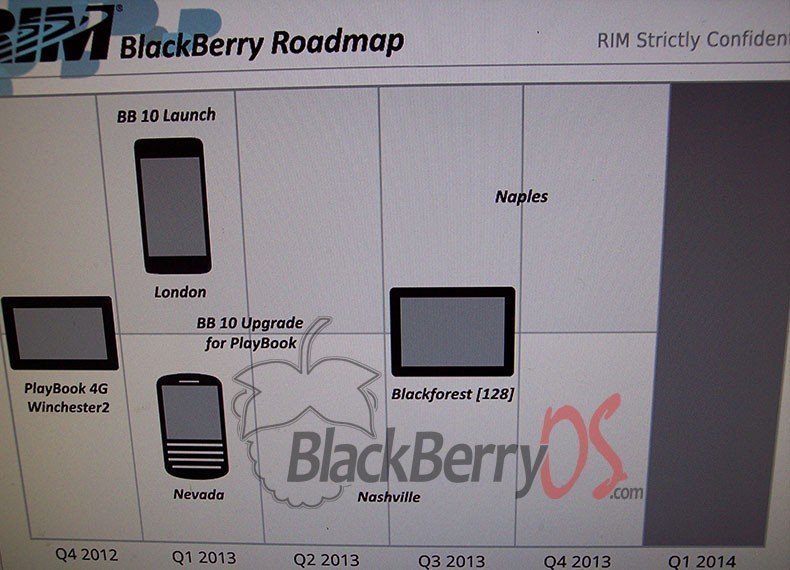 Amid all the bad news of RIM’s poor quarterly results and the delay of the first BlackBerry 10 smartphone until Q1 2013, there is a glimmer of hope. The 2013 roadmap of the new BlackBerry 10 devices has leaked, showing known devices such as the BlackBerry L and N-series smartphones(codenamed London and Nevada) similar to the Torch and Bold series we now know. These two very anticipated smartphones are intended to launch sometime at the beginning of 2013.

The 4G PlayBook (codenamed Winchester), as expected, should launch soon. With a 4G-enabled PlayBook, RIM now offers a completely BlackBerry independent mobile tablet solution. BlackBerry 10 should be available to the PlayBook and PlayBook 4G later on in 2013.

Also, we now have an approximate time frame for the release of the mysterious tablet-ish device codenamed “Blackforest” which should launch sometime in Q3 2013. Looks like a 10″ PlayBook is still in the works!

I believe this is promising news as RIM is streamlining its product portfolio and focusing on a few devices to excute the vision of Blackberry 10. With fewer devices, RIM is better able to deliver BlackBerry 10 more efficiently and helps its chances of success.