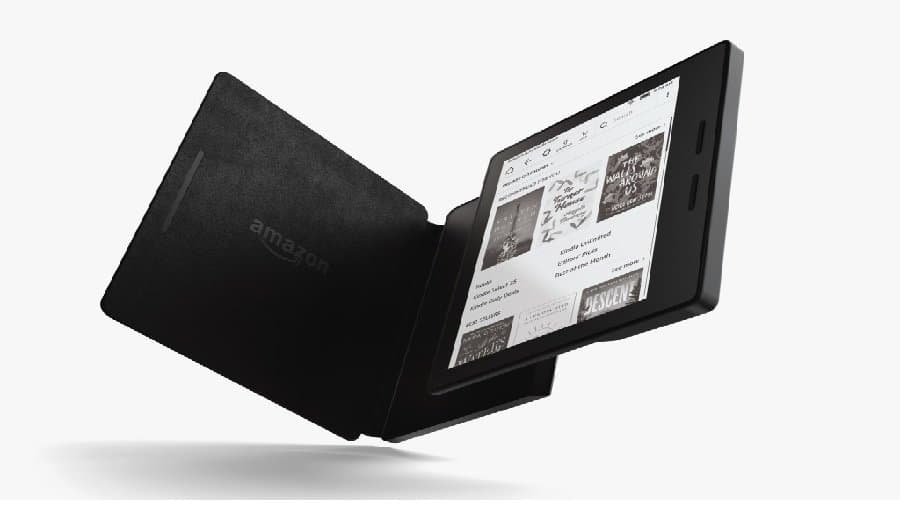 There was a lot of speculation earlier as TMall, a Chinese retail website along with Amazon’s Canadian site accidentally showed the photos and specs of the upcoming Kindle e-reader. The page of course went down later, but not soon enough. Redditors, known for their inquisitiveness, had already taken a close look at the specifications.

But now it has been officially released, and we bring you all the specs and pictures.

Kindle Oasis showcases a brand new design. It weighs 131gm and has a thickness of 3.4mm at its thinnest point – about 30 percent thinner and more than 20 percent lighter than previous Kindles. The screen resolution is 300ppi.

It’s also asymmetrical, with a grip on one side that makes one-handed reading easy. The ergonomic grip shifts the centre of gravity to the reader’s palm so it rests like a book.

Leftie? No problem, just flip the e-reader over.

There is a built-in accelerometer that detects whether users are reading with their left or right hand, and the page along with the page-turn buttons are automatically rotated.

According to Neal Lindsay, vice president of Amazon Devices, the company’s goal is “To make the device disappear,” making sure people can enjoy their reading without any distraction.

Apart from the sleekness of the device, there’s another important feature that Amazon is relying on heavily – its rechargeable battery case.

The battery on Kindle Oasis is said to last for up to 20 months of standby time, and 9 weeks of regular reading, which according to Amazon is 30 minutes a day.

A new “Kindle sleep mode” is also believed to contribute to the insane longevity.

The Kindle e-reader comes with a genuine leather battery case in three different colors. The battery point attaches to the Kindle Oasis with magnets and charges without cables.

But there’s also a general discontent about the Oasis not living up to its name. Although it’s called Oasis, there’s nothing waterproof or water-resistant about it.This is a feature Amazon Kindle users have always wanted to see in their Kindle e-readers. This may lead to some disappointment.

Peter Hildrick-Smith, president of the consulting firm Codex talks of the expensive Kindle Oasis device saying, Amazon is “looking to keep their e-reading on the cutting edge. What it’s not doing is appealing to people who aren’t already reading e-books.”

Global preorders for the Kindle Oasis started Wednesday and the device will ship on April 27.

Kindle Oasis may be pricier than the earlier Kindle editions. Amazon’s basic Kindle costs $80, the Kindle Paperwhite with its adjustable front light and hi-res display costs $140, and the Kindle Voyage sells for $199 retail.

But Amazon may pull it off with the slimmer and lighter design of Kindle Oasis, and the rechargeable battery case.