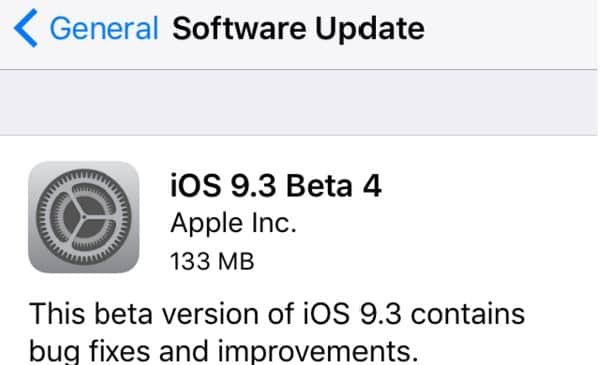 iOS 9.3 Beta 4 is Out Now: Available for Developers

Apple has released the iOS 9.3 beta 4 to registered Apple Developers. This beta comes almost two weeks after the release of the third iOS 9.3 beta.

If you’re a registered iOS developer, then you can download the latest beta from the iOS developer center. If you’re running iOS 9.3 beta 3, then you should be notified of the new update. A public beta should be available in the next few days.

The latest beta changes the icon for the Night Shift toggle found in the Control Center. It is now a moon inside of a Sun.

Apple is said to release the public version of iOS 9.3 during the rumored March special event. The iPhone 5se, updated Apple Watch, iPad Air 3 and watch OS 2.2 are supposed to be unveiled at this event. A jailbreak for iOS 9.3 is also apparently in the works and could be released once the final iOS 9.3 update is available to the public.