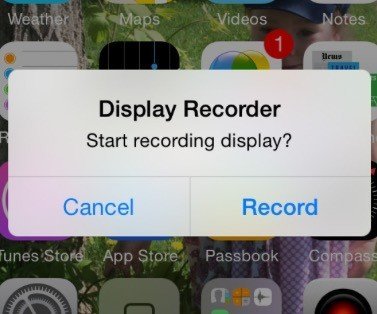 Display Recorder is a very handy tweak that’s available to download from Cydia, the jailbreak app store. This tweak allows you to record the screen on your iPhone, iPod Touch or iPad. This can come in very handy when you’re trying to review an app, a new feature, a game or anything else and want to record it.

The only setback is that this tool can’t be used to record the system audio. You can, however, record audio using the device microphone. It also records finger inputs or taps, which can also be very useful for reviews.

It has been over a month since the release of the Pangu iOS 9 jailbreak that supports iOS versions 9, 9.0.1 and 9.0.2. If you’re jailbroken on iOS 9 – 9.0.2, you can download Display Recorder from Cydia. The tweak has been available for some time on Cydia, but it was recently updated to support iOS 9 jailbreak completely. Here’s what’s new and fixed in Display Recorder 1.3.20 update;

Display Recorder is a paid product and will cost you $4.99, but it is certainly worth the money as you can use it record your iOS device screen. If you’ve already purchased the product on a previous jailbreak, you will be able to download the iOS 9 jailbreak update for free.

To install the tweak, you will need to be using a device running iOS 9 and jailbroken. The tweak currently supports iOS 9 to iOS 9.0.2 and iPhone 4s, iPad 2 or iPod Touch 4th gen and later.

Apple has patched the exploits used for jailbreak iOS 9 – 9.0.2 in the latest iOS 9.1. It is highly unlikely that an iOS 9.1 jailbreak will be released anytime soon as iOS 9.2 is expected to be out soon.

iOS 9.2 Beta 5: There are no official dates for public iOS 9.2 release, however, company has never gone beyond a beta 5 and we wouldn’t expect that to change with iOS 9.2. iOS 9 beta 4 is pretty impressive , so we could be seeing the final release coming soon without GM for a point release – it may go from beta to release version.