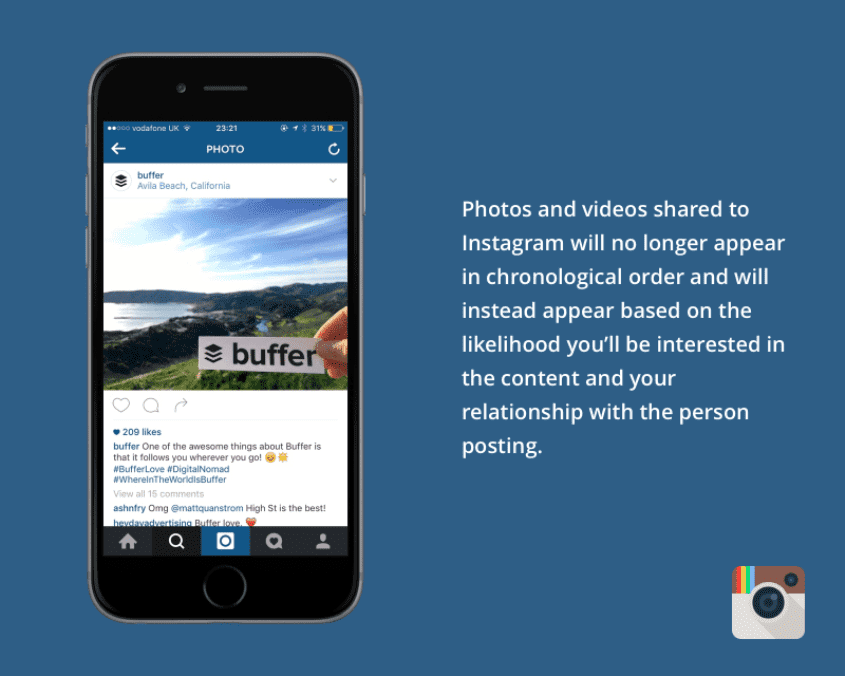 Instagram, the photo and video-sharing social media platform announced Tuesday that it may soon use an algorithm to show users’ feeds by relevance instead of by chronology.

With this decision, Facebook-owned Instagram follows in the footsteps of its owners at Facebook, which prioritizes the News Feed.

This essentially means, you will have your own personalized Instagram Feed and posts that the algorithm assumes you would prefer seeing first, will be moved to the top of the Feed.

“If your favorite musician shares a video from last night’s concert, it will be waiting for you when you wake up, no matter how many accounts you follow or what time zone you live in. And when your best friend posts a photo of her new puppy, you won’t miss it,” stated Instagram in a blog post.

Does that sound familiar?

This is exactly what Facebook did a few years back, deciding the posts that it hopes will be “relevant” to individual users, based on whether the posts came from a close friend or how the user responded to similar posts.

Nonetheless, this will be a pretty drastic shift for Instagrammers like me, who enjoy the simplicity the social network offers.

Instagram users used to having the newest and freshest posts at the top of the Feed are not pleased with the non-chronological idea, and as expected, an outcry has already started: 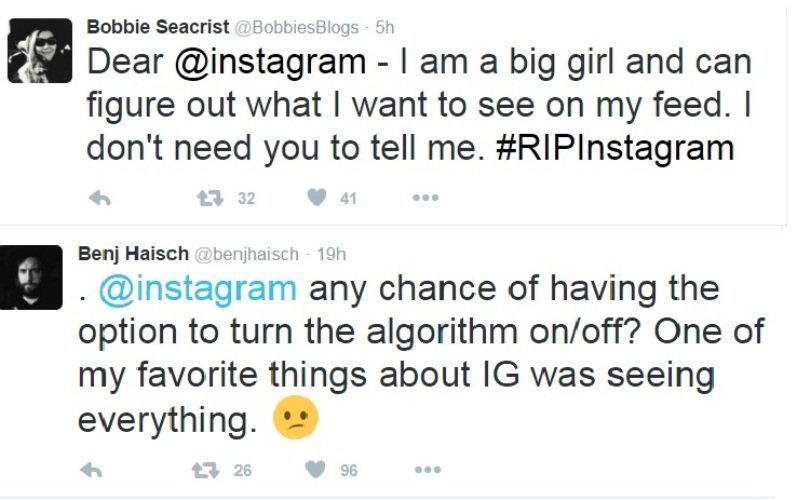 The company said the change is in response to its finding that on average, Instagram users miss 70% of photo and video posts in their feeds.

As the app’s audience has grown to more than 400 million, the flood of photos and videos on Instagram’s Feed has increased. According to forecasting firm eMarketer, the company is expected to add 26.9 million users in the next four years, almost double that of Twitter, which has about 320 million monthly users.

By shifting to algorithmic feed, the mobile photo-sharing app hopes to address an issue where people would miss posts because they are bumped down due to newer posts taking their place.

Testing of the New Algorithmic Feed

Instagram team will start testing the new algorithm to see how the changes improve relevance. As the testing begins, all the posts will still be available in users’ feeds, but according to relevance and not in reverse chronological order.

Don’t worry just yet – Instagram didn’t give an exact date when these changes will roll out to your feed, but you can expect to see your feed change in the coming months.

That doesn’t mean they’re only looking out for us – they also look out for advertisers. If we take the example of Facebook, the algorithmic News Feed has helped the company and its advertisers, and as far as the users go – don’t we just love to hate any change?

According to forecasting firm eMarketer, Instagram’s mobile ad sales are expected to be $1.37 billion in the U.S. and $1.48 billion worldwide, during the current year. If the algorithmic feed proves successful, this number can be even higher.