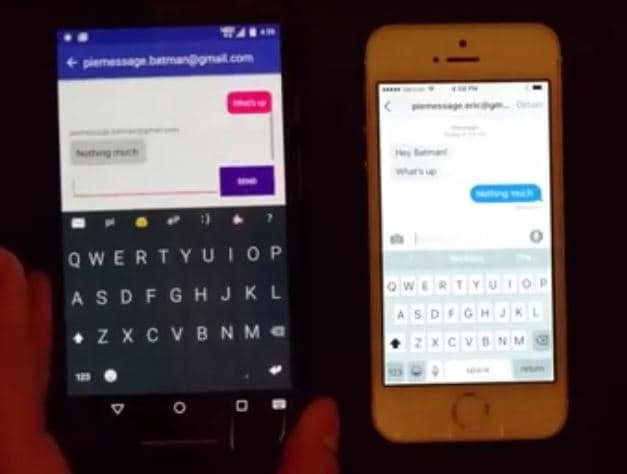 iMessage on Android Comes via Pie Message, But Needs a Mac

iMessage is the messaging client on iOS, but works only with iOS devices. But, what if you wanted to try iMessage on Android? Well, now you can, sort of.

This isn’t the first time that someone has made iMessage work on Android, but the method wasn’t very safe as it relied on third-party remote servers. Apple uses its own servers for iMessage, which is why it works only on Apple devices, be it Mac, iPhone, iPod Touch, or iPad.

Now, a developer has made an app called Pie Message, which brings makes it possible to use iMessage on Android. There is a slight catch though.

Pie Message still uses a server to relay messages between an iOS device and Android. However, in this case, the application uses a Mac as a server. Preferably, your own Mac. Therefore, if you want iMessage to work on Android, you’ll need to own a Mac. Also, the Mac will have to be constantly running if you want to keep getting messages.

If you’re an Android user and own a Mac, then you can use iMessage on your Android device to send and receive messages from your iPhone buddies. The app is still in super alpha beta, as the dev suggests, and plenty of things don’t work. You cannot send photos and videos, group messaging doesn’t work, and you cannot see if the other person is typing.

This is certainly a cool concept, and the developer hopes that other devs will work on this to improve its functionality. Apple will certainly not like this, but it’s not in their hands as this doesn’t use Apple servers. There will never be an official iMessage for Android app from Apple, so this is your best and safest bet.

The developer has mentioned that photos and group messaging support will be added to the app in the next update. If you’re interested, you’ll need to have some knowledge with coding. You can check out the entire set-up process and learn more about the project at GitHub.