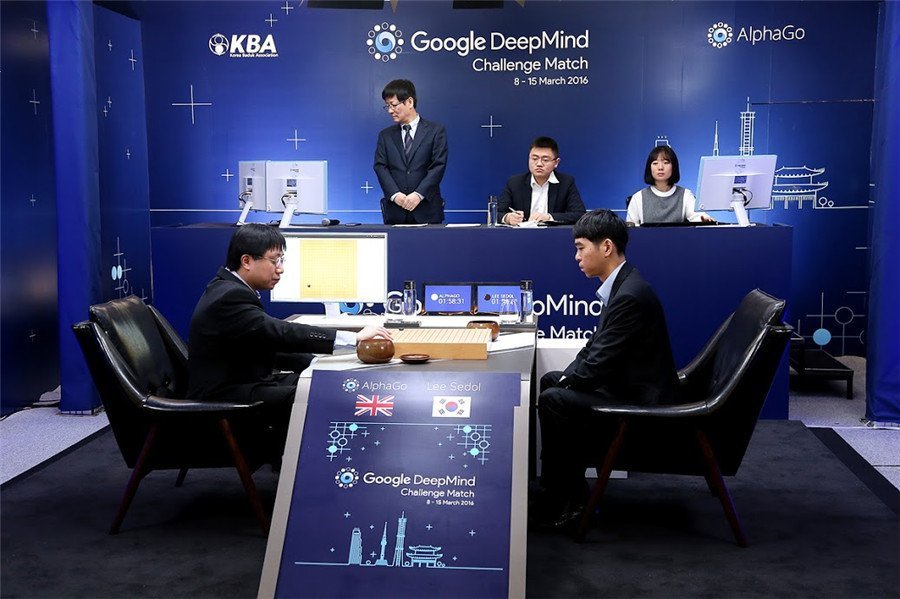 In the ultimate battle of man versus machine intelligence, Google’s artificial intelligence system, AlphaGo, has come out victorious by winning against human opponent and World champion Lee Sedol.

Today’s match is the first of five matches between DeepMind’s AI program and the South Korean champion, with the winner taking home $1 million.

This is not the first time Google’s AlphaGo has won over a champion. The first major breakthrough came last October, when it beat Fan Hui, the European Go champion, in a series of five matches.

Google then challenged Lee Sedol to a five-game match this March, the first of it was played in Seoul on March 8th 2016 (Seoul time), and the winner is AlphaGo.

Go is a complex strategy game that originated in China about 3000 years ago. It is played by two players who place black and white markers on the board. The object of the game is to control more of the board than the opponent.

Developed by Google’s own Artificial Intelligence firm DeepMind, AlphaGo was born as the game of Go is considered an excellent test for AI, as this game is more complex for computers to win than chess.

According to a Google press release, before this, computers could only beat amateur Go players, making AlphaGo’s wins that much more significant. AlphaGo also has a 99.8% success rate, winning 499 of 500 matches against other top Artificial Intelligence ‘Go’ programs.

The first match between AlphaGo and Lee Sedol was played on March 8th and the four-hour game was broadcast live.

In a past interview, Lee Sedol said “I have heard that Google DeepMind’s AI is surprisingly strong and getting stronger, but I am confident that I can win at least this time.”

By winning this game, Google’s DeepMind AI crushed Sedol’s predictions and did what many thought is not possible: beating a grandmaster at the highly complex ancient Chinese Strategy game.

The game is said to be fairly close, but the AlphaGo program forced 33-year-old 9-dan professional Lee Sedol, to resign three and half hours into their first battle.

While AlphaGo defeated a Go champion, Fan Hui in October, this is the first time the machine has defeated a World Go Champion.

After losing the game to AI, the Korean champion is reported to have said that he may slip up once, but he’ll just have to hope that this is his one and only time.

Wondering what happens to the prize money of $1 million if DeepMind’s AI wins? It will be given to charity.

The two champions, the AI and the human, will meet four-times more this week, but with one win on its side, AlphaGo only needs to win two more to win the champion’s title.

The games will be played in Korea, so the dates given here are based on Korean time.

Watch this space for updates related to the remaining four games.

Enjoy this video to Match 1 of AlphaGo versus Lee Sedol. But let me warn you.. it’s 4 hours long.