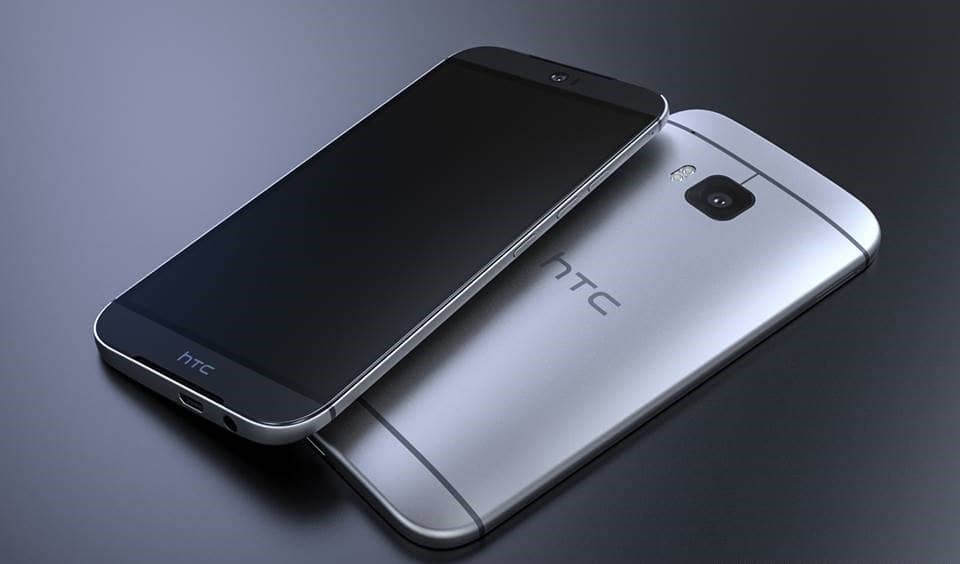 We know that the device is going to look similar to the One M9, but include some design changes. The traditional HTC bar at the front will be missing, and so will the front facing BoomSound speakers.

HTC has confirmed that the new smartphone will feature some new type of BoomSound speakers, although we’re not sure what. A new camera is also said to be present, that is supposedly the first of its kind in the world. We also know that the HTC 10 will feature Snapdragon 820 and 4GB of RAM.

A recent leaked photo showed the AnTuTu benchmark scores for the device and it apparently blows the competition out of the water. According to the benchmarks, the HTC 10 scored 156091, which is higher than the new Xiaomi Mi 5 and the Samsung Galaxy S7 Edge. The photo was sent by an anonymous source in Taiwan. 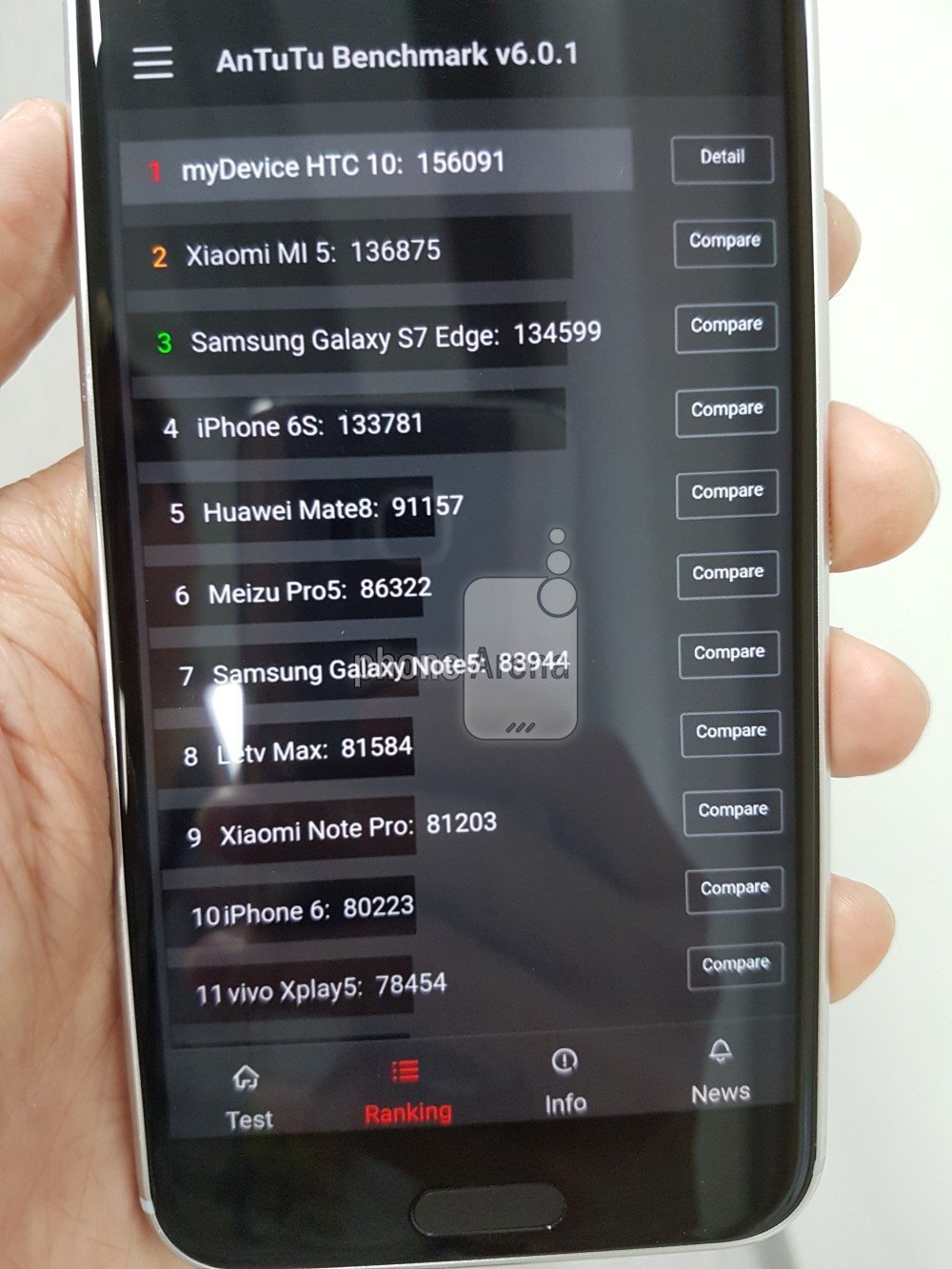 Update – March 27, 2016 – The official announcement date for the HTC 10 release has been revealed. The company will be taking wraps off the new flagship smartphone on April 12.

Alongside the announcement date, the company posted another teaser on their Twitter page. They’ve been posting teaser images from some time. One of the teasers stated that the HTC 10 will have a first in the world camera setup.

Now, a new teaser image says that the device will also feature a new type of Boom sound. According to reports and leaked renders, the HTC 10 will not feature front-facing BoomSound speakers. Therefore, this could be a new set of speakers, which could be louder than before. HTC phones have been known to have the loudest front facing speakers among smartphones. 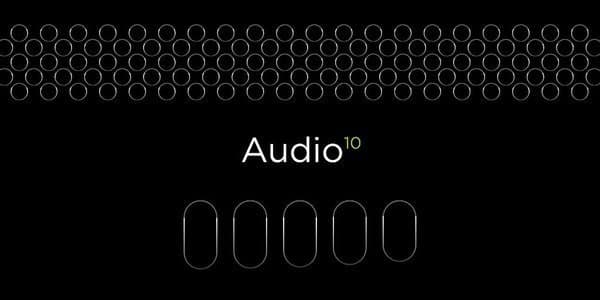 Are you excited for the launch of the new HTC 10 on April 12?

Update – March 17, 2016 – We’ve pretty much seen everything there is to of the upcoming HTC 10. As you already know, HTC will be calling its next flagship, just HTC 10 and now they’re teasing something new.

HTC recently posted a teaser image on Twitter  stating, “World First, World Class, Front and Back. You’ll see.” Apparently, the HTC 10 will have a new type of camera, a world first camera, both on the front and the back. At least, that’s what HTC is claiming. 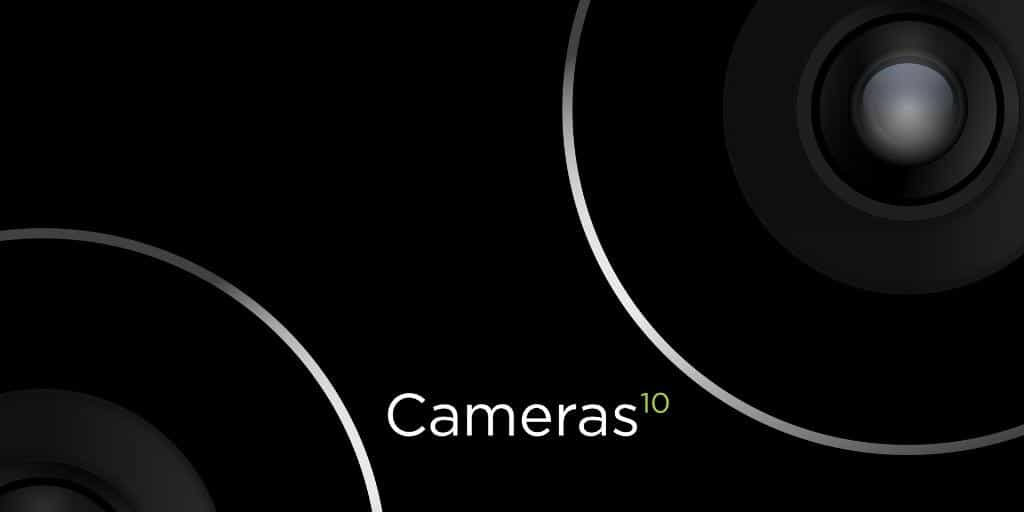 Leaked renders don’t really show a dual-camera setup, but HTC could have done some other kind of magic that makes the camera awesome. Or the smartphone could use both the front and rear camera to record 360-degree videos. Nobody knows what’s coming. We’ll know soon enough, though, as it has been rumored that HTC will unveil the new phone on 19th April.

Update – March 13, 2016 – More HTC 10 renders have surfaced, this time showing a white front and even a Gold version. The next flagship from HTC is said to be released on April 19, but we’ve already seen it all.

After the recent onslaught of leaks from leakers @evleaks and @onleaks, we pretty much know everything about the new HTC 10. We’ve even seen real life photos of the phone, which you can find later on in this post.

Now, the latest renders that show an all white HTC 10 and the Gold variant. These renders were posted, once again, by @evleaks. 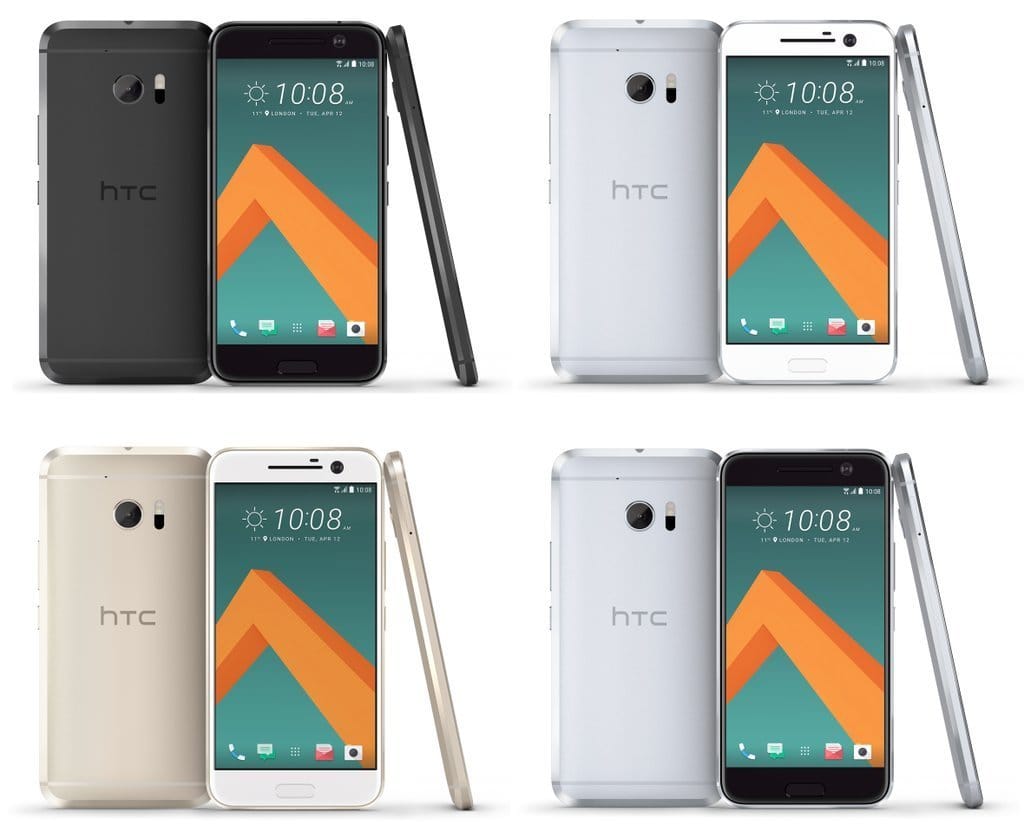 Update – March 5, 2016 – According to prominent leaker Evan Blass, HTC will call its next flagship as the HTC 10, and not M10. The leaker also released the first official renders of the HTC 10 and now we know how it’s going to look.

We’ve seen plenty of renders and leaks, but these new pictures show the device from all angles. It does look very much like an HTC device and you can see the chamfered edges at the back. There’s a single camera, no front facing speakers and no HTC branding. 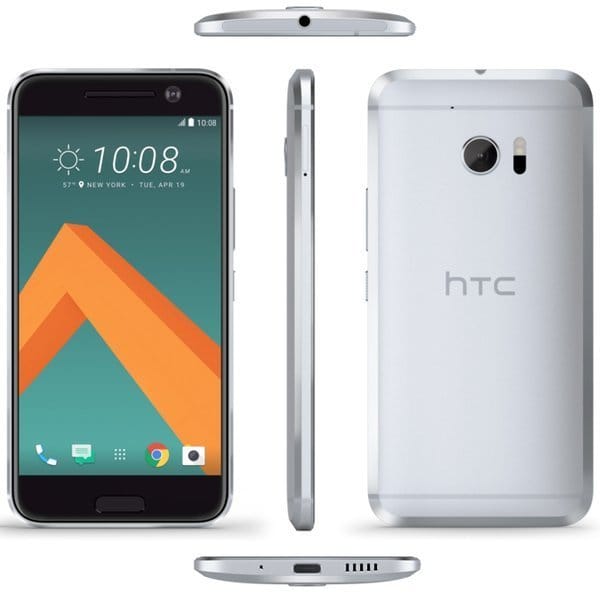 Another industry leaker, OnLeaks, also joined the bandwagon and leaked some more real world pictures of the HTC 10. He also confirmed that the device will have a 5.15″ QHD display, Snapdragon 820 SoC, Adreno 530, 4GB RAM, a 12MP camera and USB Type-C. 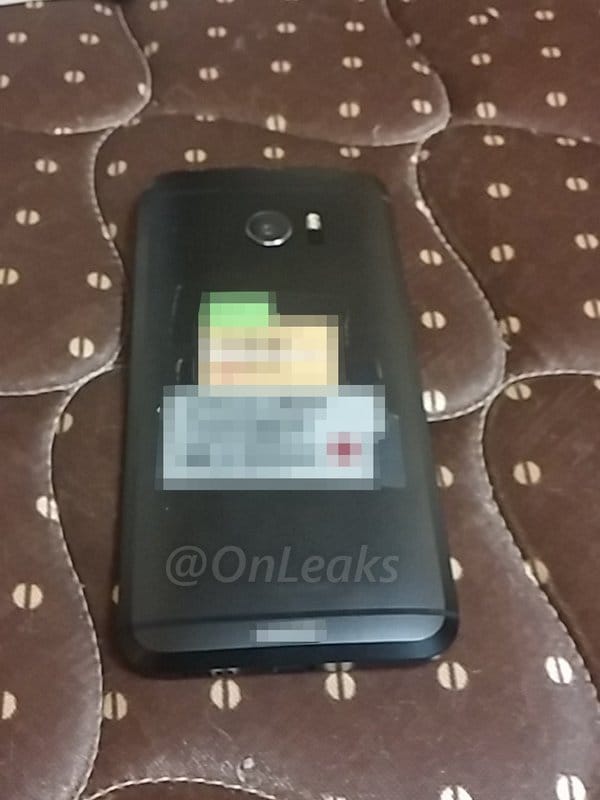 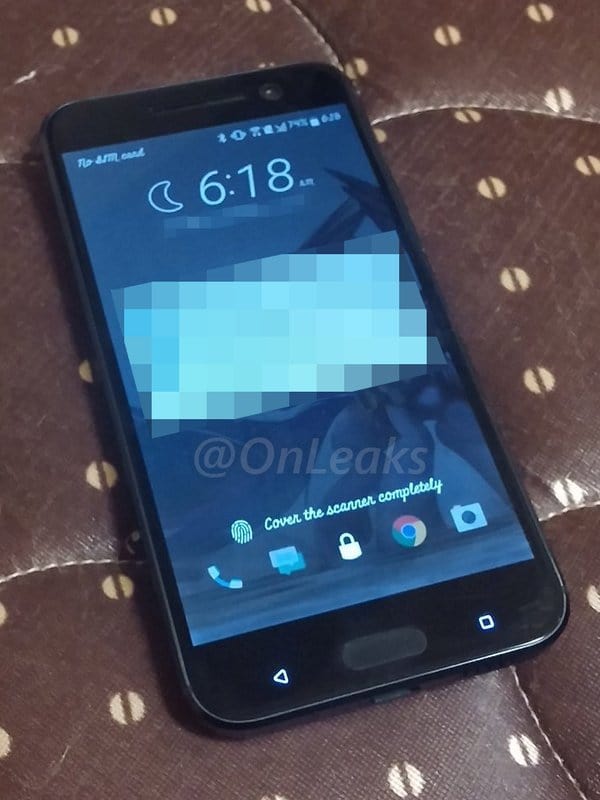 Update – March 02, 2016 – The name One M10 has been confirmed, not official, however it has been reported to be found from a drop-down list of devices in an HTC online survey form, taking HTC’s flagship line into double digits.

HTC, however, wasn’t a part of it. But, that doesn’t mean they were going to sit quietly. On the last day of MWC, HTC sent an email to several publications with a subtle hint to their next flagship, the One M10. The image just said ‘Power of 10’. 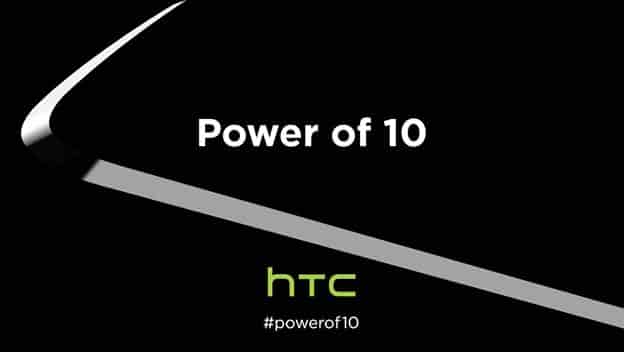 Update – February 24, 2016 – A new leaked photo claims to reveal the back portion of the HTC One M10. Up until now, we’ve only been seeing the front face of the M10. This new photo doesn’t show the entire back, only the top portion that has the camera.

The photo shows that the One M10 will be an all metal phone, but will feature some design changes. The back is slightly curved and the edges are chamfered. There’s a 3.5mm headphone jack on top and volume buttons are on the left. The camera is seen to be slightly protruding, has a dual-tone LED flash and what looks like a sensor for auto-focus.

Update: Feb 19, 2016 – We’re going to see two new flagship devices next week, the Samsung Galaxy S7 and the LG G5. However, there’s another flagship smartphone that consumers are eager for, the HTC One M10.

Recently, Evan Blass had leaked a picture of a black One M10 in the wild. It confirmed a lot of rumors, such as no Boomsound Stereo speakers and a rounded home button. It also seemed to have lost the HTC branding on the front of the device.

Now, Blass has leaked another picture showing a white M10. It’s still a front view of the device, which means we have no idea what the back or side will look like.

Regarding the HTC One M10 release date, it appears that the company may be planning for a special event sometime in April. Most likely, the event will be held on April 11 in London.

Evan Blass, who gave us the official Samsung Galaxy S7 press renders, has now revealed an in-the-wild photo of the upcoming HTC One M10 ‘Perfume’.

The new leaked image confirms a lot of rumors, especially the one that said that the One M10 will look a lot like the One A9. It does indeed. Another significant change, as it appears, is the removal of the black HTC branding strip that’s been a common sight on all HTC smartphones.

Also, the Home button is now of an oval design, similar to the One A9, and looks to have a fingerprint sensor as well. There’s also no BoomSound speakers, and it looks awfully similar to the iPhone 6. 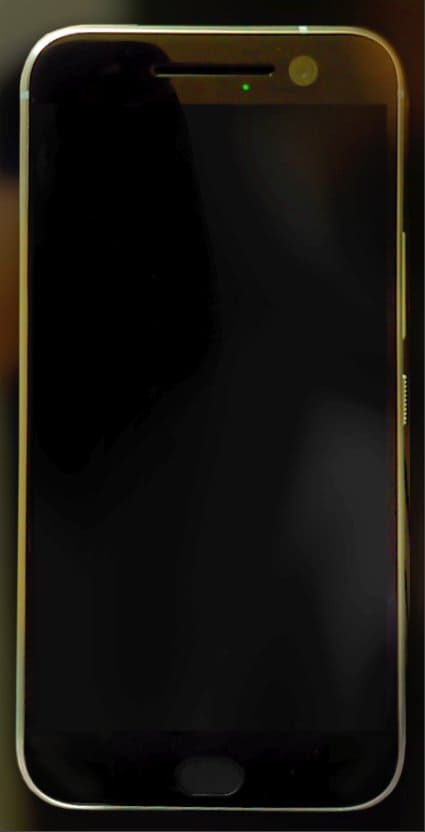 An unknown source has leaked new HTC One M10 specs, and it reveals some new features of the 2016 flagship smartphone.

Recently, a leak stated that the One M10 will look similar to the One A9 and be available at AT&T. Now, a more detailed report talks about the features and specs of the upcoming smartphone.

The new report comes from VentureBeat, who received information regarding HTC One M10 specs from someone who spent some time with a prototype device. Apparently, the device will be called Perfume, but will be sold in stores under the name One M10.

The device will feature a 5.1 inch 1440 x 2560 QHD display with AMOLED technology. It would run Android 6.0.1 Marshmallow with Sense 8.0 UI on top. The device would also have a fingerprint sensor embedded into the home button. Yes, there will be a home button.

So far, it looks like the HTC One M10 will indeed look very much like the One A9. In terms of hardware, the device will feature Snapdragon 820 processor with Adreno 530 graphics. It would have 4GB of RAM and 32GB of internal storage, which would be expandable via a microSD slot.

The person who used the prototype couldn’t speak much on the device as there are chances that it would be changed to the final product. He also revealed some other details such as the camera.

According to the source, HTC will use its Ultrapixel tech on the new M10. They introduced the new Ultrapixel camera with the HTC One M8, but it didn’t do so well. Hence, they switched to a regular 20-megapixel sensor on the M9. With the M10, the company will use a 12 Ultrapixel camera with laser autofocus. It would also have optical image stabilization. The front facing camera, megapixels unknown, will also include OIS.

There is some disappointing news, though, as HTC will not be including the famous BoomSound speakers on the new M10. No front facing stereo speakers, which will surely anger all the HTC One M fans out there.

The device will most likely not be at Mobile World Congress this year. HTC will launch the device at a later date with a particular event.  No details have been shared regarding the smartphone’s pricing. What do you think of the HTC One M10 specs? Will this be a hit among the fans?

Reports from last year stated that HTC’s next flagship will be called Perfume and that it would be running on Android 6.1 and HTC Sense 8.0 UI. The device was said to feature a 6 inch 1440 x 2560 resolution display, Snapdragon 820 SoC, 4GB RAM, 20.7 mp rear cameras, 5mp front camera and a 3500mAh battery.

All the HTC One M10 specs sound good, but the only thing the company has to change is its rumored name, Perfume. That’s not really a nice name for a smartphone, don’t you think?

Major smartphone leak expert, @evleaks, had tweeted a picture showing the HTC Perfume codename in an AT&T database. This confirms that AT&T will be getting the new HTC flagship, but that shouldn’t be a surprise. He followed with another tweet stating, ‘If you like the A9, you’ll love the M10.’ So, yeah, it’s pretty much confirmed that the One M10 will feature a design similar to the One A9.

Other One M10 features likely include a fingerprint sensor, front-facing BoomSound speakers, and IP68 water-resistance certification. A MediaTek powered M10 would also be launched for the Asian market.

All U.S carriers will most likely sell the new One M10 as soon as it’s launched. The only thing that’s not confirmed now is the One M10 release date. Reports suggest that HTC will not unveil the smartphone at MWC in February, but instead release the handset in March.

Will you be upgrading to the HTC One M10 this year or will you stick with the M9?