House of Cards was Netflix’s first ever originally produced series, and it was a surefire hit right from the get go.

The series won multiple awards in its first season, and was quickly renewed for a second and third season.

House of Cards season 4 was announced in April 2015.

So what’s in store for Frank Underwood in 2016?

House of Cards season 3: the beginning of the end?

From the get go, the audience knew Spacey’s protagonist / antagonist Frank Underwood would stop at nothing, including cold-blooded murder, to reach his ultimate goal. Season 3 sees his plans bear fruit, as his machinations finally make him President of the United States.

But, incredibly, what should have been a triumph of will is the beginning of Underwood’s downfall.

Despite having worked his whole life to get inside the oval office, it turns out he is woefully underprepared for the realities of the world’s most important job.

With mounting opposition from within his own party, Frank breaks under the pressure and alienates everyone around him. His wife Claire bears the brunt of his breakdown, and this culminates in her decision to leave him for good.

House of Cards season 4: what’s next for the Underwoods?

Ever since season 3’s gut-wrenching finale, the Internet has been abuzz with what could possibly be next for the Underwoods on season 4 of House of Cards. 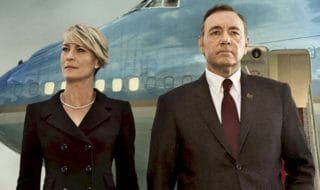 Fans of the show are incredibly invested in the Underwoods’ marriage. They have been hailed as the perfect couple with a great marriage.

Clearly, the most important question the show needs to address is whether Claire will actually follow through with her decision to leave Frank.

Much of Frank and Claire’s strength as individuals stems from the strength of their marriage, so their split is bound to change the dynamic of the show considerably.

Neve Campbell to join the cast as a series regular

The other major news for the drama’s fourth season is that Neve Campbell will join the cast as a series regular for season 4.

There are no details yet on Campbell’s character, but it has been speculated that she will be one part of a new power couple that’ll rival Frank and Claire.

Of course, seeing as the Underwood marriage is on the rocks, it’s also possible that Campbell could play a new love interest for Frank.

Are you excited for what’s in store?