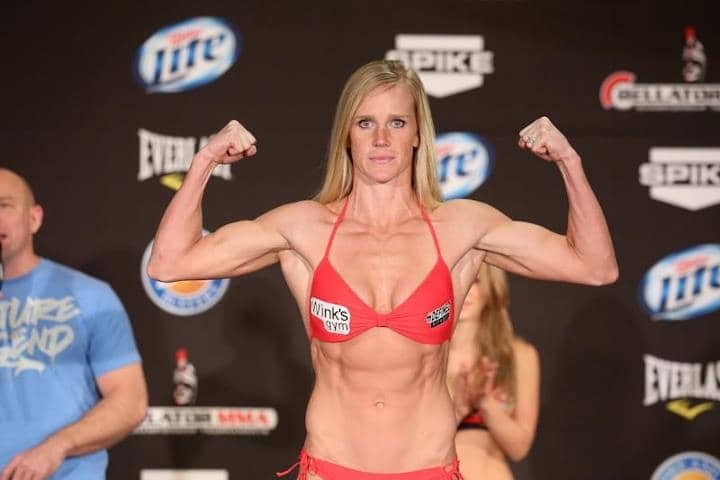 Holly Holm Net Worth: 5 Interesting Facts You Should Know

Share Tweet
American mixed martial artist who competes in the Ultimate Fighting Championship (UFC), Holly Holm is the Bantamweight Champion in 2015. She shocked the world after defeating Ronda Rousey with a knock out 59 seconds into the second round to retain the title.Here are 5 interesting facts that you should know about Holly Holm.

1. Holly Holm is a former boxer and kickboxer

Born on October 17, 1981 in Albuquerque, New Mexico, Holm played soccer, and took part in several sporting events like gymnastics, swimming and diving before getting to boxing and kickboxing. She was trained by Mike Winkeljohn who taught kickboxing and she also participated in the International Kickboxing Federation to win the national titles in the international rules adult women’s welterweight division as an amateur. Her record stands at 6-0-2.

As a professional boxer, Holm held several welterweight titles and was considered one of the best female fighters. Having been named female Fighter of the Year twice in 2005 and 2006, she became the undisputed welterweight champion.

Holm signed a multi-fight deal with UFC in 2014 and debuted at UFC 181 against Raquel Pennington, but had to withdraw due to an undisclosed injury. She faced her again in UFA 184 and won by split decision.

Having fought in the UFC at 10 different occasions until 2015, Holm has won 7 fights by knockout and 3 by decisions while she’s never faced a defeat.

Ronda Rousey, considered the best female UFC fighter in the ring saw defeat for the first time against Holly Holm on November 14, 2015. With the defeat, Rousey also lost her Bantamweight championship title that she had for three years. Surprisingly, it only took Holm 59 seconds in the second round to knock her out.

Long legs, pretty face and a hard ass UFC fighter, Holly Holm is taken and is married to Jeff Kirkpatrick. Jeff and Holly got married on April 27, 2012 in Cancun, Mexico. Her husband was also born in Albuquerque and he studied finance and accounting at University of New Mexico where he graduated in 2002.

Touted as the toughest challenger to Ronda Rousey, Holly Holm made headlines after the fight as a 20-to-1 underdog to go on and win the fight. Her poised look and picture-perfect strategy dismantled Rousey’s strength within six minutes and she surely should be making a lot of money out of it.