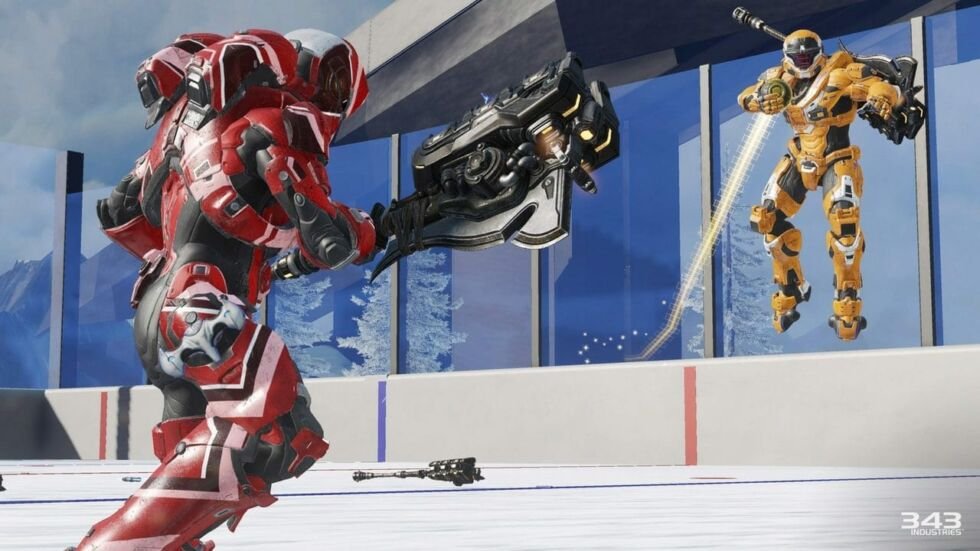 Continuing with their current trend, 343 Industries is going to release even more free Halo 5 content soon. Their newest content pack, titled Hammer Storm, is bringing with it a new map, an old, favorite mode and plenty of other goodies.

On 343 Industries’ blog, they go into a bit of detail about the new Halo 5 update. The first thing they mention is Torque, a new map that they are wrapping up. Torque is a symmetrical Arena map, and though they didn’t reveal the entirety of the map, they shared a few images and explained their decisions while building it. The map itself looks like it is going to be on a giant construction crane, and based on the blog post; fights will be based more on vertical movement than horizontal.

Also included in the update is a slew of new armor and weapons skins. These are all purely cosmetic, and they’ll allow players to customize their character even more than before. There are also new weapons being released, but 343 opted not to get too into some of the information. Updates will also be added for Forge mode. While 343 didn’t go into detail about what the additions were, it is likely just a few extra pieces that players can use while building a map. Of course, there were promises of bug fixes along with everything else.

Perhaps the biggest piece of news is the reintroduction of Grifball. Fans of the Halo series will know exactly what Grifball is, and newcomers to Halo 5 will soon get to enjoy the great mode. 343 Industries promises some big information regarding Grifball, and they won’t reveal it until a live stream on Tuesday.

As we’ve previously mentioned, two maps are included in the Halo 5 update. The first, Riptide, is described as “winding routes of steel and sand” on the Halo Waypoint, 343 Industries’ blog. The other map is Urban, which is a large, circular map with weapon drops in the middle.

Among the additions are a number of new weapons, such as some new REQs for the Carbine and multiple new skins for various weapons. However, the biggest announcement is that Halo 5 will be getting back the Battle Rifle from Halo 2. The Halo 2 Battle Rifle can be found as a Mythic loadout weapon, and it can be unlocked for Forge mode.

Also, all new REQs that have been added in the Halo 5 update can be found on the Waypoint.

Infinity’s Armory is the third update released by 343 Industries that added content for free. The previous two, Battle of Shadow and Light and The Cartographer’s Gift, were released in November and December of 2015, respectively. In addition, 343 Industries has made it clear that they will be releasing more expansions for free through summer of 2016.

Halo 5 Will Have Playlists of Maps Created In Forge Mode

Jan 25, 2016 – Halo 5: Guardians is now allowing players to fight on maps made by other players. These maps have been made accessible via a Forge playlist, compiled by 343 Industries.

The Breakout playlist, which is the first of many to come, is made up of maps created by players. The goal is to highlight the best maps made, encouraging players to explore Forge Mode. The list is only made up of Breakout maps, but future playlists should include other maps types.

Currently, there are ten maps available to play. You can find all of the maps at the Halo Waypoint, along with more detailed information. Also, at the end of next week, players will be able to vote for their favorite map on the Breakout playlist. Winners will be added to a new Breakout playlist, slated to be released in February. It is unclear whether or not the playlist will be updated each month.

The playlist, along with all future playlists, is just another piece of content being released by 343 Industries. The Forge Mode in Halo 5 was recently updated to allow players to save more maps. Also, included in the new update, titled Infinity’s Armory, will add some features to Forge Mode. 343 Industries has made it clear that they want Forge Mode to be a major part of Halo 5.

Infinity’s Armory is also set to release before the end of the month, meaning it will be available sometime next week. The update is going to include a few new maps, unlockable armor and many other additions, such as the return of the Battle Rifle from Halo 2. Expect a lot more updates to come for Halo 5 as the year goes on.