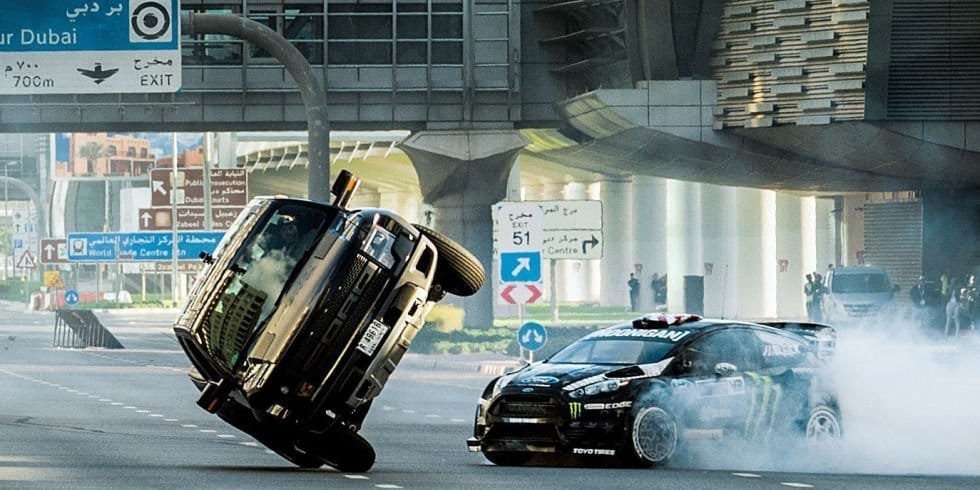 Gymkhana 8: Ken Block Takes His Skills to Dubai in the Latest Gymkhana Video

Ken Block’s Gymkhana 8 is out! The Global Rally Cross and World Rally Championship driver shows off his drifting skills in Gymkhana 8, which is set in Dubai.

Every year, Ken Block releases a Gymkhana video, which has him drifting around places that otherwise would be illegal to drift on. For example, he once drove his super fast rally car, the Ford Fiesta RX3, on the streets of San Francisco.

His Rally cross car, the Ford Fiesta, has 650 horsepower, all-wheel drive and can do 0-60 in about 1.8 seconds. That’s quicker than most super-cars and you can see the evidence in the new video. Gymkhana is basically a sport he invented, where he slides or drifts the cars around, underneath, over and in to obstacles.

In Gymkhana 8, you will see a lot of cool stunts and donuts around a Ford F-150 Raptor on 2 wheels and a plane.

You can also see his Ford Fiesta beat all the best super-cars in a drag race, such as the Bugatti Veyron, Ferrari F12, Lexus LFA and a Lamborghini Aventador. We’d like one of those Ford Fiesta’s please!

Dubai is a beautiful place, and also has the most exotic cars as police cars, which Ken doesn’t care for in the video. Watch Gymkhana 8 below;

Gymkhana videos from Ken Block usually rack up a couple of millions of view within the first two days of release. Let’s see how well the newest video does. The cinematography is also pretty cool and yes, a lot of GoPro’s were used and destroyed in the filming of this video.

What do you think? Were you satisfied with the exhaust note of the Ford Fiesta sprinting and drifting around Dubai?