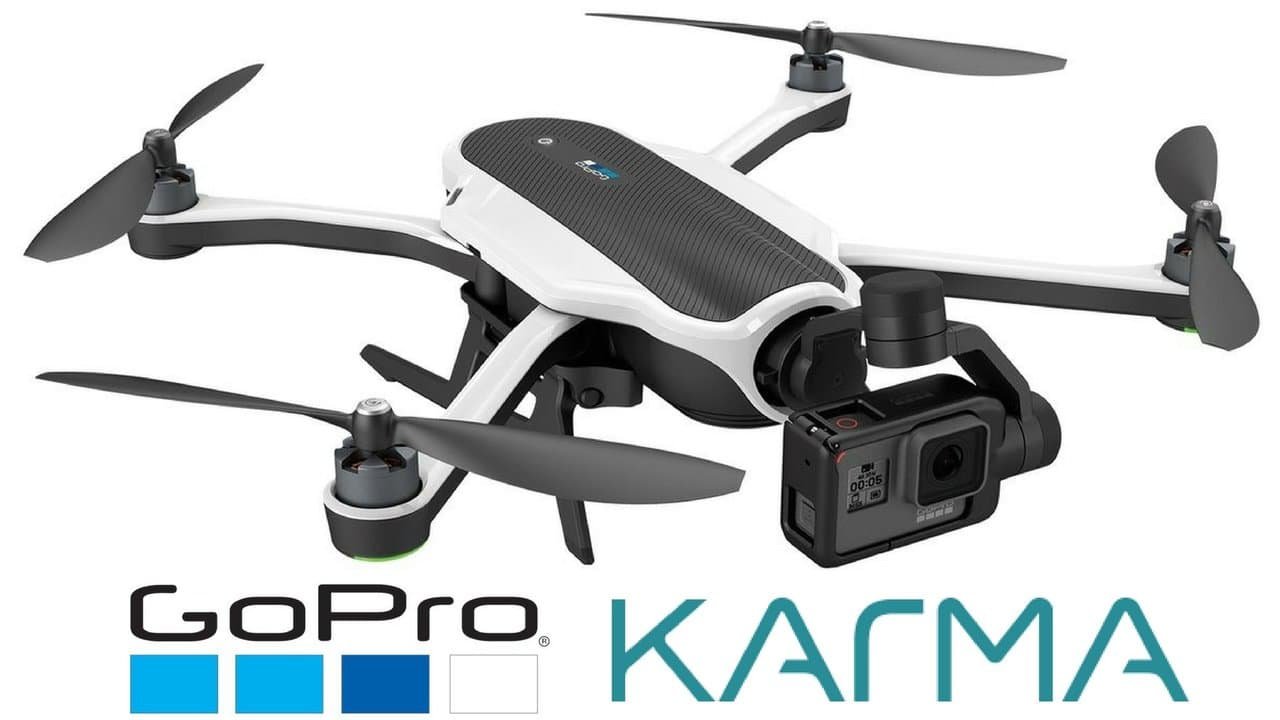 GoPro Karma is a Foldable and Portable Drone Priced at $799

After years of making adventure and sport cameras, GoPro has now entered the Drone market with the brand new portable GoPro Karma Drone.

The drone was actually teased last year at the Code Conference, however, the product release date was pushed forward. The Karma drone doesn’t come with a camera, but is compatible with the Hero 5 Black, Hero 5 Session, and Hero 4 Black or Silver.

What you get, is a portable drone that is super easy to fly and a backpack to carry the drone. Yes, a lot more is included, but the camera isn’t included. You can buy the drone with a Hero 5, but that’ll cost you extra.

The GoPro Karma drone is designed to be ultra-portable, and it’s got some clever tech as well. Let’s talk about its design, specs and features.

The main goal of the company was to make an affordable, lightweight and portable drone that you can carry anywhere, even if you don’t use it.

GoPro has gone with a foldable design for their Karma Drone. You can fold its wings, landing gear and even remove the stabilizer from the front of the drone.

Unlike other drones, the Karma has its camera and stabilizer located at the front. This, according to GoPro, will avoid the propellers showing up in the footage. You can even remove the stabilizer to shoot handheld footage. 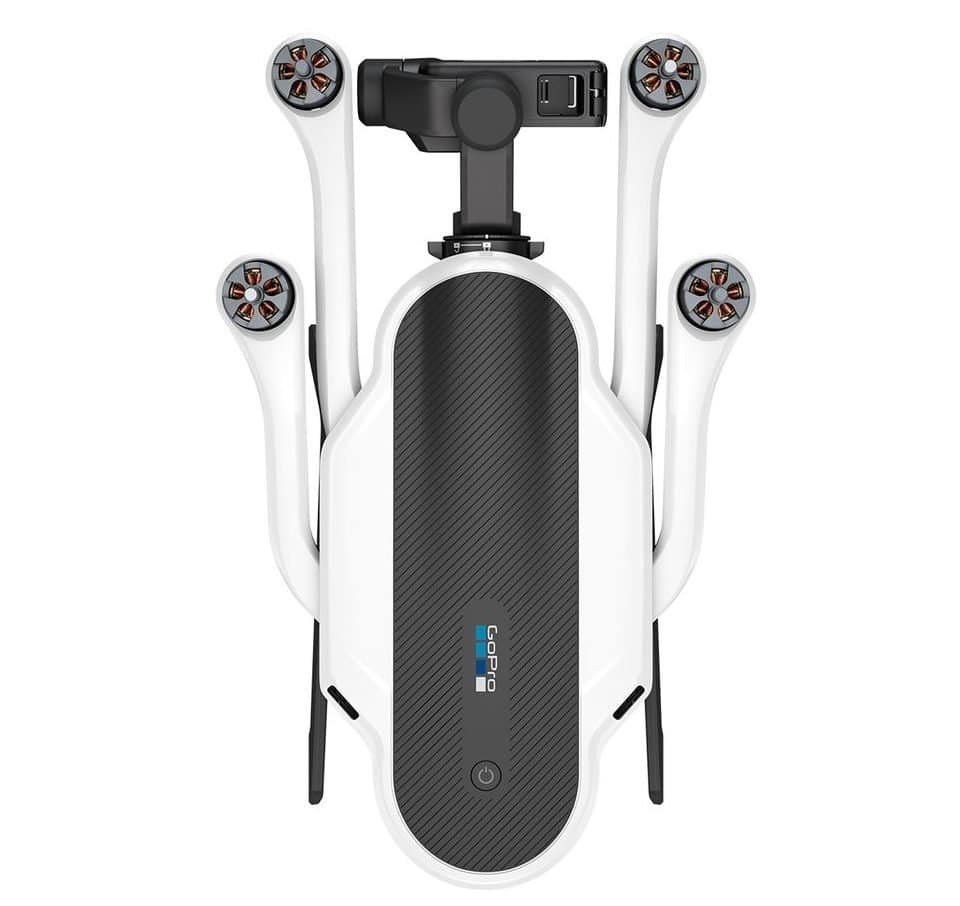 You can fit the drone in to almost any regular sized backpack, but not to worry if you don’t have one. GoPro will give you a backpack that will carry the drone, the controller, the stabilizer, handheld grip, and other extras.

The GoPro Karma Drone has all the features needed to shoot great videos and photos. The drone can travel at a maximum speed of 35 mph till distances of up to 1000 meters.

It weighs around 1000 grams and can resist winds up to 22 mph. You can fly the drone up to a maximum height of 4500 meters and it operates at a frequency of 2.4GHz.

The propellers on the drone are 10 inches long and you get 6 of those when you buy one. 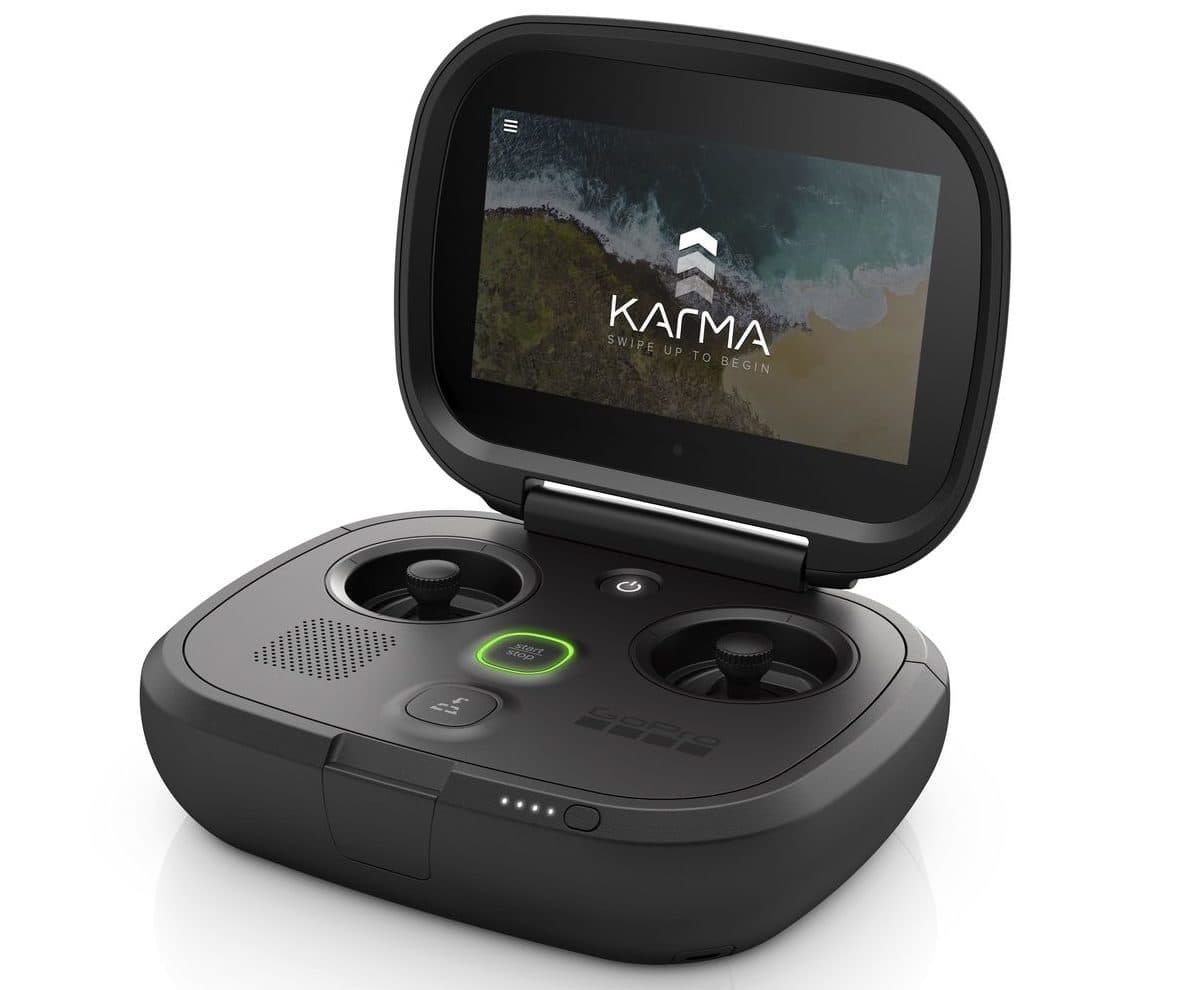 The included controller features a 5 inch 720p touch display that has a 700 nits of brightness, which is plenty for viewing under sunlight.

It also has easy to use buttons and joysticks, similar to a gamepad. There’s a button that controls take-off and landing, so even beginners can fly the drone with ease. The controller weighs about 625 grams and can last up to 4 hours on a single charge.

The GoPro Karma Drone features several pre-defined modes that make filming easy. There’s a Dronie mode that takes zoom selfies, a Cable Cam mode that will make the drone move from point A to B, a Reveal mode that makes the drone pan till the subject is view. Finally, there’s an Orbit mode where the drone will continuously revolve around the subject.

You can even let your friends view the drone footage live and control the camera thanks to the GoPro Passenger app. An easy to use editing app called GoPro Quik will allow you to stitch videos and audio and apply filters.

GoPro has priced the Karma drone very competitively at $799. Yes, it doesn’t come with a camera, but you can buy bundles that will offer discounts on the new GoPro Hero 5 and Session cameras.

You’ll be able to buy the Karma drone on the 23th of October. The new GoPro Hero 5 and the Session cameras will be available for purchase on October 2nd. Go here to sign up to be notified when they are available.