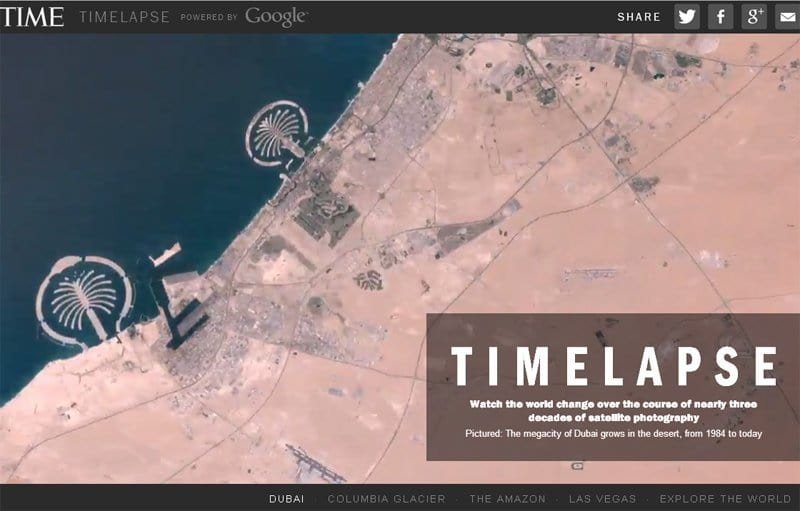 See The World In 1984! Google Maps Adds Time-Lapse, Traffic Nearby And More

Check out the Time-lapse update on Google Earth! Google Maps has attempted to enhance and scale-up the capabilities of mapping in its products through continuous and timely updates.

You can now have a much deeper look at the changes that the world has undergone in the recent years. Thanks to the new Google Maps major upgrade. You can now see how the world was like up to back in 30 years. Google has joined hands with the TIME magazine to enhance the new Time-lapse feature on Google Earth.

Go Back Up To 30 Years on Google Earth Timelapse update

Google Earth gives you satellite images of the earth since 1984. You will be able to witness the landscape changes and the gradual evolution of the globe. Google Maps released the Time-lapse update first in 2013. The recently updated version Time-lapse allows you to go back four more years in time than the previous versions. It also offers added legacy satellite data and other data from newer satellites.

Witness How The Earth Has Changed Over The Years

Thus you will now be able to see more things happening on our earth from anywhere across the globe. You can track the glaciers retreating at Arctic just from where you are sitting! Adding on, you can even witness the rivers changing course, and the expansion of swampy areas. Thus, you don’t have to go to the Nile or Las Vegas and Nevada to witness these. You don’t have to turn the pages of history to see how it was 40 years ago.

Also this time the images are sharper and more comprehensive than ever. Google has used the same technology employed in the June updates of Google Maps and Earth, to improve the Time-lapse update. Also, you can get to know more some of the most interesting areas from the TIME magazine.

The Google Earth Engine scrutinized around three quadrillion pixels from over 5 million satellite images. The Landsat Global Archive Consolidation Program and two new satellites-Landsat 8 and Sentinel-2 are the major imagery contributors. Google collected the best pixels from these satellites. With these, the search engine giant has created 33 images of the whole planet. Each image corresponds to each year from 1984 to 2016.

Google encoded the 3.95 tera-pixel images into over 25 million overlapping video tiles of multiple resolutions. The images were “made interactively explore-able by Carnegie Mellon CREATE Lab’s Time Machine library.” Says Google’s blog post. The technology allows for generating and viewing time-lapses that can be zoomed and panned over space and time.

You can upgrade to the new Time-lapse services from the Google Earth engine website. The website also shows some of the most compelling images that it offers in the update. There is also a special YouTube playlist on these images. Witness the Shirase Antarctic Glacier, O’Hare Chicago Airport, Bridge in San Francisco and more from the GIFs shared on the site.

The Google Maps Traffic Nearby Update

If you are an Android user, you can use the awesome feature called Google Maps Traffic Nearby. This new feature shows all sorts of traffic congestion on the roads. If your journey is getting blocked by an accident or anything you can now know it from Traffic Nearby. You would have been entering the destination or engaging in driving mode to check the condition of the roads. Hence, you can now know any changes on your nearby locality not having to do either of the two.

Google Maps has also introduced specialized voice commands. So, you can now keep your eyes on the road without having to look the route on the map. The voice shall do both the direction talking and traffic tracking. The voice command also allows you make calls and play music en route.

Check Out the Updated Journey Guide With Speed Limits

Adding on, the newly updated Google Maps will also display local speed limits. This comes in the GPS journey guide. In Android devices, a road sign is shown in the bottom corner when Google Maps is in navigation mode.

The time-lapse update, Traffic Nearby, specialized voice commands, GPS journey guide with speed limits and more. Wow! Looks like Google Maps has come out with a bang this time with numerous updates.