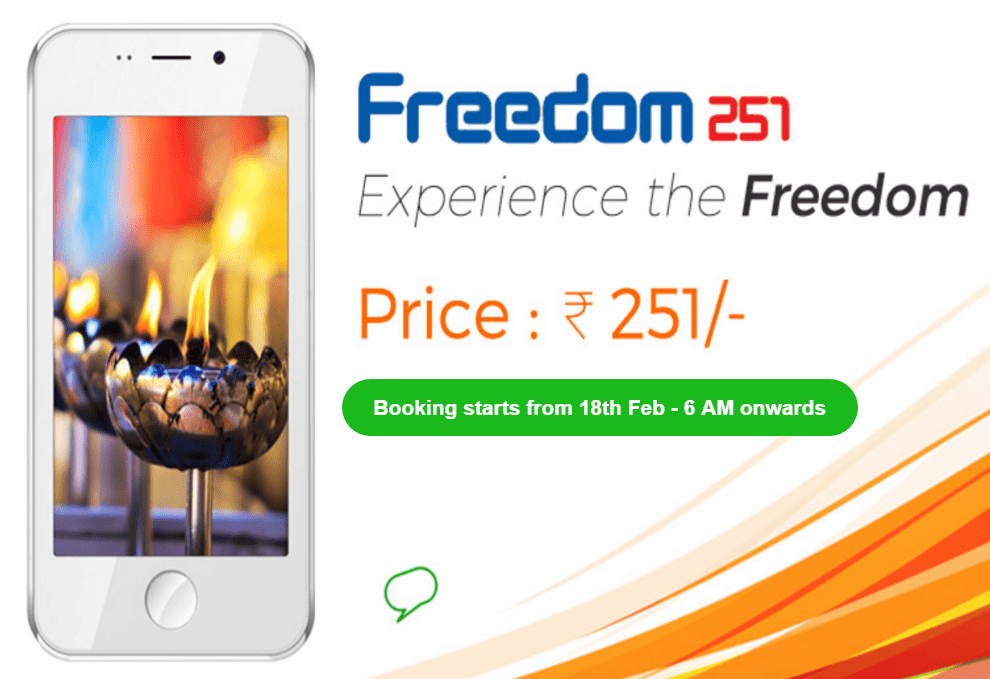 Freedom 251 is a Smartphone That Costs $4, To Be Available in India

LATEST – Sorry folks, the company behind the Freedom 251 smartphone are now pitching a new release date. The smartphone will now be delivered starting July 6, and not on June 30 as stated recently.

Update – June 28, 2016 – Here’s some update on what happened to the $4 smartphone called the Freedom 251, the cheapest smartphone in the world.

Ringing Bells, the company behind the smartphone, has now promised that deliveries of the device will start from June 30. Earlier, the company had given a d-day of June 28, but has now extended it by two days.

The smartphone was said to be a scam, but it now seems to be real. Well, only time will tell. The company said that they have around 200,000 units of the device ready to be shipped. Once the first batch is delivered, they will re-open registrations for the handset. It will only be available online.

Update – February 19, 2016 – Yes, you read that right. A new smartphone called the Freedom 251, made by Ringing Bells India, will be available for purchase in India for $4.

During an event held in New Delhi, India, the President of Ringing Bells and Member of Parliament Dr. Murli Manohar Joshi, took wraps off the Freedom 251. The phone is, insanely cheap and there are no hidden charges etc.

The Rs. 251 smartphone is not subsidized, you pay the amount and you get the phone. But, you can’t get one right now. The President of Ringing Bell said during the event that you can order one online between February 18 and 21, but it’ll only be delivered to you after June 30.

This is an important milestone for the Government initiative Make in India, which is all about manufacturing products completely in India. However, the Freedom 251 isn’t completely a made in India product yet, as some of the parts are still outsourced. About 70 percent of the device is made in India, as of now.

The company manufacturing the smartphone has no ties with the Government, apparently and will sell the device online only. Their goal is to sell around 1 crore smartphones in a month and they will not accept more than 2.5 lakh pre-orders for the first batch.

Despite costing just $4 or Rs. 251, the smartphone has some decent specs. It is still usable for being the cheapest smartphone in the world. Here are its full specifications;

All that for just Rs. 251 or $4? There must be a catch. Well, the prototype shown at the event looks a lot like an iPhone 6s clone and is mostly made up of several different phones. The icon pack is lifted straight from iOS and that could pose a problem if Apple decides to lawyer up. You’ll get pre-installed apps such as Women Safety, Swachh Bharat, Fisherman, Farmer, Medical, Google Play, WhatsApp, Facebook, and YouTube.

The company will provide a 1 year warranty for the device. Unfortunately, the device hasn’t received BIS certification yet, without which, the smartphone cannot be sold in India. Getting all the necessary certifications, etc, will take some time.

It actually costs around Rs. 2000 for Ringing Bell to make the Freedom 251, but by making it in India and by selling it online only they’re saving around Rs. 1000. Also, their projected number of sales will help them save more by economies of scale. We’re still not convinced how this all works and are a little skeptical about that insanely low price.

The company, if this smartphone is a success, will make more devices in different price ranges. They also want to start selling their own SIM card, which would give users unique features. The website for the smartphone is currently live and bookings started already at 6 AM on February 18. If you’re in India, you should probably check it out.

The main userbase for this smartphone will be the farmers, villagers and people from sub-urban areas, who’re on a budget. For $4, the Freedom 251 sounds like an amazing deal, but will it see the light of day, will it be as good as promised and will it reach its goals?