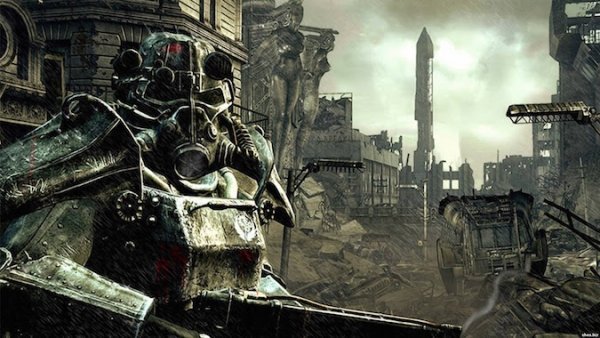 Bethesda Game Studios has released a new image from Facebook on Fallout 4’s upcoming Automatron expansion which is due to arrive on 22 March for Xbox One, PS4 and PC. The screenshot showcases Ada, which is one of the expansion’s robot companions and Ada, along with Automatron’s other robots, can be customized as Bethesta confirms.

Fallout 4 DLC To Include New Settlements, Enemies And More

After months of speculation, Bethesda has finally released information regarding the plans for Fallout 4 DLC.

The new Fallout 4 DLC is coming in three separate parts: Automatron, Wasteland Workshop, and Far Harbor, to be released in March, April and May, respectively. Each part can be downloaded separately, or they can be downloaded as a full package. If players had previously purchased the Season Pass, they will receive all three at no additional cost.

The first add-on, Automatron, adds a special mission regarding a mysterious figure called Mechanist. Mechanist unleashes a slow of evil robots, and it’s up to the Sole Survivor to hunt them down. Also, this add-on will come with the ability to mod your robot partners. You can collect pieces from robots you defeat to add, change and modify your partners – even down to their voice and paint color. This will cost $9.99.

The second piece of Fallout 4 DLC is Wasteland Workshop. This add-on is completely designed for the workshop mode, and it gives players the chance to capture, tame and force into battle the creatures of the Commonwealth. It also comes with tons of little additions for your settlements, such as neon lighting, taxidermy and more. This piece will cost $4.99.

The last piece of Fallout 4 DLC is Far Harbor which looks like one of the biggest pieces of DLC a video game has ever had. This will open up an entirely new section in the Commonwealth, complete with new missions, settlements, places to explore, weapons, creatures and much more. This will cost $24.99.

Perhaps the most exciting part of Bethesda’s announcement is that this is the first piece of DLC, meaning that there is more to come. A Season Pass can now be purchased for $49.99, with the promise that it will offer $60 would of content.

Update: Feb 28, 2016 – In the DLC announcement on Bethesda website, they have outlined some of the DLC packs that will be released for “Fallout 4.” One of these, the “Automatron” pack, will be rolling out next month and add a number of missions pitting players against the Mechanic and his army of robots.

Fallout 4 Will Become Much More Difficult For Some Players

Fallout 4’s Survival Mode is going to be getting a lot more difficult.

When it was released, Fallout 4 has the standard set of difficulty levels. When fans saw Survival Mode, they assumed it would be akin to Hardcore Mode in Fallout: New Vegas; that is, they would be required to monitor their character’s sleep, hunger and thirst. However, Survival mode only increased the difficulty in terms of damage dealt and taken.

Bethesda has decided to change Survival Mode, and based off their teaser of an update, it seems that it will be much closer to the old Hardcore Mode. In a tweet released by Bethesda Game Studios, Survival Mode will include “food, sleep, diseases, danger and more.”

This probably means that the player will have to monitor their thirst and hunger levels, frequently feeding and giving water to the vault dweller. Also, the danger aspect of updating the difficulty setting is understandable; it will probably mean more legendary enemies, higher levels and different damage ratios. However, the disease aspect of the game is a bit different, since there isn’t a mechanic in the game that would make the player sick.

Likely, too much radiation in the Fallout 4 update is going to cause adverse effects to the player beyond a reduced health bar. This would make traversing the wasteland even more difficult, and it would put an added emphasis on radiation reduction.

Along with this overhaul, Bethesda is also planning on releasing news of the new Fallout 4 DLC soon. While they didn’t make it clear how soon the news would come out, it will probably me a matter of days rather than weeks. We’ll be sure to keep you posted when that news does release!

Update: BethesdaStudios have just tweeted the following from their official Twitter account: We know you’re ready to learn what’s coming for Fallout 4 DLC. We’re not far off, and we think you’ll be excited.

Fallout 4 is poised to have a very exciting week – that is, if Bethesda has their way.

Ever since its release late last year, fans have wondered when Fallout 4 is going to be getting a major update. There have been numerous rumors surrounding potential DLC, and Bethesda has announced that the game will be moddable on both Xbox One and PS4. However, it’s starting to look like the newest update is going to be a standard update.

The update, which was already released on PC versions of Fallout 4, changes small parts of the game, and it won’t affect gameplay in a major way. On the PC, the update added ambient effects and weapon debris effects. It also added a feature for you to monitor your settlers’ statuses, along with a few other minor additions. There were also a number of small gameplay fixes added to the game, some of which are specific to the PC version.

Currently, this update doesn’t affect Xbox One or PS4 gamers. However, Bethesda has made it clear that they want this update to be released on the console versions of Fallout 4 this week. If it is not released this week, then they will likely release it at some point next week.

The update will most likely add some, if not all, of the features included in the PC update. It will also probably help prepare the console versions of the game for modding, which promises to add a ton of gameplay value.

In light of this news, those waiting for modding or DLC will have to wait a little longer. However, Bethesda will probably be letting everybody know their plans sometime soon.

Update: Express reports: A new Fallout 4 mod boosts the game’s performance and framerate without suffering any visual degradation. ‘Insignificant Object Remover’ takes away small details including stones, kelp, rubble and debris, making the game a much smoother experience. The modes author explained on Nexus: “Those little rocks, twigs, bits of concrete and piles of rubbish aren’t physical objects in the game world. It’s actually grass that’s generated on the fly using parameters specified when you launch the game.”

“Fallout 4,” released on November 10, 2015, should have downloadable content coming soon. The newest iteration in the popular series did not disappoint, and gamers have been playing the game through and through, looking for any new secrets they may have missed.

Well, owners of “Fallout 4” won’t have to wait too long to get some new material to pay through. Bethesda, the company behind “Fallout 4,” is planning on releasing the first wave of DLC in early this year. While there is no specific date, it seems reasonable that it will be released before the end of March.

There are no hints yet regarding the content of the new DLC, but based on the past releases of Bethesda, we can make some educated guesses. There will more than likely be new missions for players, and the rewards will certainly be new weapons, armor or perks. Also, expect new maps to explore with new NPCs, and possibly even new partners that will follow you around the Commonwealth.

One rumored location for DLC would involve the bottom of the ocean. Early concept art for the game showed the main character gazing out at the ocean, and a few other pieces of art showed a character on the ocean floor, leading to speculation that content may have been developed. Any ocean floor DLC could possibly involve a nuclear submarine, underwater vault or even underwater city that can be explored.

After the release of this downloadable content, Bethesda will continue to make more DLC packs for players. Game director Todd Howard stated that there will be multiple expansion packs, and their releases will extend well into the year.

Bethesda has been relatively quiet about what it has in store for DLC for Fallout 4, however we believe to know that at least one of the new pieces of content is going to contain some sort of mission that takes place underwater. Some Redditors have interestingly come up with their own ideas as to what would make a really good addition to the story.

Updated on 31/jan/2016: This DLC idea would basically be a new take on the revolutionary war as the British would gain knowledge about the Common Wealth’s relative stability. The Redditor, isometimesheartweed laid out his idea like this: “Rumors of the commonwealths relative stability reach the shattered remains of the United Kingdom, and the remnants of her Majesties army sets across the sea to invade.”

Updated on 03 March, 2016: Bethesda Games Studios have just released a new beta patch and, the new patch has officially gone live for Steam users, but for those playing Fallout 4 from their consoles will still have to wait – and there’s no indication for when the patch will be approved for both Xbox One and PlayStation 4.

The new 1.4 patch adds native support for the upcoming Fallout 4 add-on content, the first of which is expected to arrive later this month. Entitled Automatron, the first of three announced expansions will run gamers either $10 to purchase individually or $50 for the Season’s Pass, which gives them an all-access pass to the year’s upcoming wasteland-based content.

For those who are confident that they’ll purchased the DLC, Bethesda has created a season pass. For only $30, players will get access to all of the DLC as it is released. According to Bethesda, the real cost of the downloadable content will come out to around $40. This deal is available for gamers on Xbox One, Playstation 4 and Steam.

One important note regarding downloadable content in “Fallout 4” is that there will be no exclusive content. So regardless of what system you are gaming on, you will be able to play the DLC.