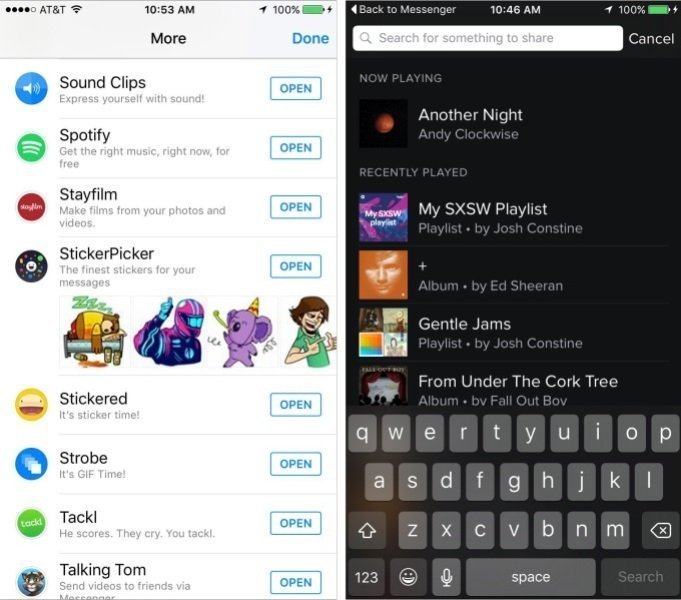 Facebook Messenger is envisioned to be an “Everything App” where users can do just about everything, and access most businesses and services via Messenger.

In another step towards achieving this, Spotify music sharing has been integrated into Facebook messaging service.

This integration comes after almost five years after Facebook entered into a partnership with Spotify that allows Facebook users show others the music they’re listening to.

This new feature indicates Facebook’s eagerness to become an important hub for media like music and movies.

The new feature is only for mobile users.

Facebook’s Messenger app is one of the most downloaded apps. It can be used to settle up checks, call an Uber, as a social network or as a replacement for Skype.

Facebook also has Business on Messenger, meant for businesses to integrate into the chat app and communicate with their customers directly. Many big brands are trying out the Facebook Messenger, including Walmart, Hyatt and KLM airlines. And there are several small e-tailers using it to improve their businesses.

Hyatt was one of the first to integrate and the Messenger is already working as a 1-800 number for Hyatt’s online customers.

A blue dot indicates Hyatt is online and available to chat. Three gray dots indicate someone is reading the message. Within no time, a Hyatt customer service representative responds. And yes, it’s a real person responding.

Getting back to Spotify music integration on Messenger, this feature is for mobile users and works seamlessly.

Tap the little “more” dots icon on the bottom right of the Messenger, select Spotify and select from either the “Currently Playing Song,” “Recently Played Songs” or “Search the Spotify Library” for the song. Tapping on the song starts playing the song.

The chosen song can then be shared with another Facebook Messenger user, who will then tap to listen to that song on Spotify.

Facebook wants to make its Messenger a place where people do a whole lot more than just chat. Spotify integration makes it possible to share music while chatting, and it can be exciting to have the option to instantly share a song you’re chatting about.

Facebook’s Messenger service has been promising. Predictions are in favor of Facebook, as the Messenger is proving to be a brand-friendly tool.