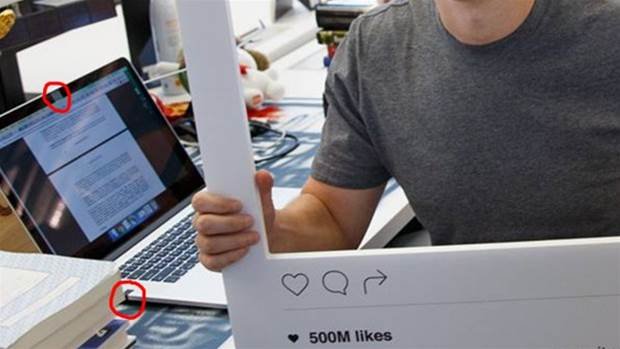 Everything the King of Facebook does is scrutinized under a magnifying glass and that’s exactly what happened when the unsuspecting Mark Zuckerberg proudly showed off his 500 million monthly active users on Instagram.

He posed for a picture of himself holding an oversized instagram frame that revealed “500M Likes.”

And that sent online users into overdrive, calling the Facebook CEO paranoid.

If you look at the featured image, you’ll notice a laptop at the desk. The camera and microphone (circled in red) are both covered with tape.

Covering the webcam and microphone is a perfect way of stopping hackers who seize control of a computer, from hearing or seeing anything.

Of course, many have expressed doubt whether the desk and the laptop in the picture is actually from Zuckerberg’s room. The general consensus is that being a CEO, he must obviously be having a much better room and desk.

However, according to Gizmodo, the same desk was seen in a Facebook Live Video posted a few months ago.

If you look at it, Mark Zuckerberg is not the only high-profile person to cover his webcam with tape.

Of course, we have all read about the heavy security measures Mark Zuckerberg has in place, other than a simple tape over a webcam.

In a regulatory filing published on April 27, Facebook revealed that it spent more than $12 million between 2013 and 2015 on personal security costs for their CEO and his family, because of threats.

These costs include everything from the security personnel to the security equipment installed at Zuckerberg’s home.

That’s not all, In 2013, there was news of Mark Zuckerberg purchasing four properties surrounding his Palo Alto home, creating a sort of buffer zone.

This tells us that the Facebook CEO, Mark Zuckerberg takes security seriously and the taped webcam and microphone are just a small part of his security measures.