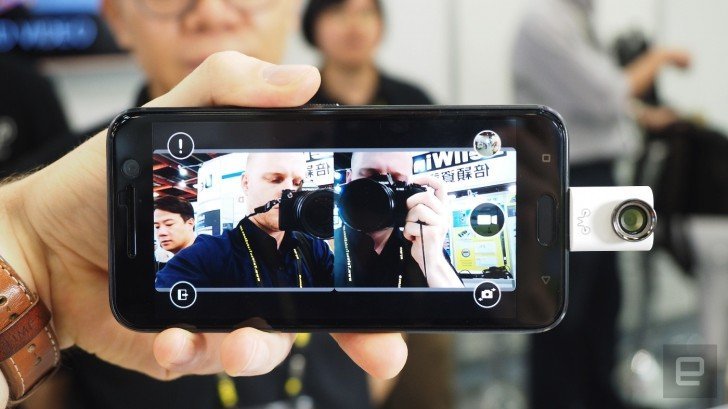 ‘Eye-Plug’ Turns your Smartphone into a 3D Camera

What if you could have a 3D camera on your smartphone and get a view of images in all angles? The Eye-Plug gives your smartphone 3D capture capabilities in a virtual reality sort-of-way, just like the devices that have a dual-camera setup.

You don’t need any other accessory with this new 3D technology; all you need is your smartphone and the Eye-Plug.

If you own the latest Android smartphone, then the Eye-Plug is for you. (Currently on Android only)

The Eye-Plug was first reported by Engadget who found it in a small Computex stand in Taipei. This accessory works with smartphones, allowing them to capture 3D images, just like you would using a 3D camera lens.

But there is a catch that may disappoint some of you. The Eye-Plug requires a USB-C port, which is only available in the latest smartphones. So you can’t use this if you own an older smartphone.

How ‘Eye-Plug’ Transforms your Smartphone into a 3D Camera

The 3D camera resolution is not known yet, but the live preview footage tested by Engadget at Computex shows “perfectly acceptable resolution for Google Cardboard 3D viewing.”

While Eye-Plug is a great 3D camera accessory for your smartphone, there are some things you must be aware of.

Eye-Plug needs a USB-C port which makes a lot of old smartphones incompatible. It doesn’t work on anything other than the Android smartphones, but the company said the iPhone model is in the works.

This device pairs with 3D viewing apps and custom-made camera, and the software makes sure your 3D experience is not lost even when your smartphone’s camera isn’t center-aligned.

All said and done, the Eye-Plug is definitely an interesting device, especially because it’s making 3D videos a reality. You can not only take your own 3D videos, but also do some post-processing focus and blurring.

This accessory that gives your smartphone the 3D camera capability is still in prototype with full-scale production commencing later this year.