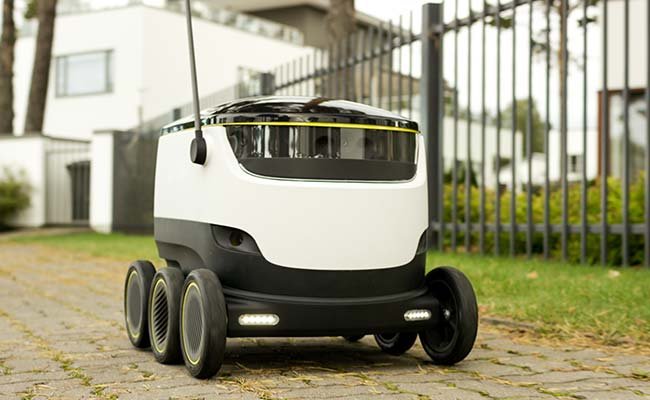 Aside from spying on the enemy, aerial drones are also fast becoming a delivery tool. Companies like Amazon and Google even have plans to incorporate them for deliveries in the near future. Several local businesses are also currently using drones for delivering food orders to customers. Drones are certainly beneficial in this respect and all, but why not take that concept to the next level with ground delivery robots?

Skype co-founders Janus Friis and Ahti Heinla are doing just that with their new startup Starship Technologies. The pair has released a new land drone designed to carry out small deliveries.

The robots are about the size and shape of an ice cooler and operate on six wheels at a speed of about 4mph, roughly the speed of an average adult walking pace. It is capable of carrying roughly 20lbs, or about two grocery bags worth of goods. This especially makes it useful for small deliveries, such as bringing lunch to a hungry customer’s home or office doorstep.

The robots also operate autonomously, meaning that once an address is inputted, the robot makes the journey to its destination all on its own. A human operator, however, is always on standby and can take over the drone should it run into any problems. For the most part, though, the bot is capable of navigating through a typical street while avoiding bumps with pedestrians and stationary objects.

As for the item being delivered? The contents are safely locked in the drone’s storage compartment and can only be unlocked by an app on the recipient’s smartphone.

The delivery bots are not unlike self-driving cars, but are pint-sized and far cheaper to build.

Starship Technologies’ vision is to one day create multiple Starship hubs with dozens of bots ready to make their delivery. A hub will be needed every few blocks since the drones are only capable of traveling a few miles.

The whole concept of delivery robots is to address the “last mile problem” commonly faced by human deliverers. Delivery vehicles contribute to traffic congestion, and drivers often face the most problem within the final mile of destination, usually associated with parking or driving in circles to find the exact address. It’s estimated that the final mile alone comprises of about 28% of the transportation costs. With the drones, drivers could stop short of reaching the last mile and leave it to the bot to complete the delivery.

Starship Technologies plans to have their bots available for U.S. and UK businesses by 2017.