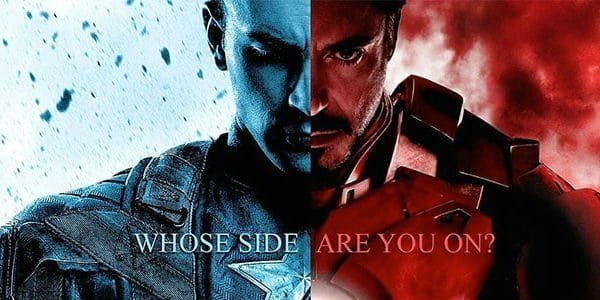 Chris Evans returns as the Captain, and is once again joined by Scarlett Johansson (Black Widow), Anthony Mackie (Falcon) and Sebastian Stan (Winter Soldier) – oh, and now Robert Downey Jr (Iron Man), which is awesome. Things don’t run as smoothly as you would think, and you soon see why the films title ‘Civil War’ is relevant.

The action packed trailer is what people have come to expect from a super-hero movie, but the storyline doesn’t follow the same sense of predictability. Instead of your regular good vs evil narrative we see Captain America taking on the role of the outlaw, as he faces off against some of his fellow Avengers.

The ‘Civil War’ theme is very apparent throughout the trailer as we see a number of fan favourites going head-to-head, highlighting the hostility between Captain America and Iron Man, which is set to be the key aspect of the film. As both characters are ‘good guys’ with before what has seemed to be a love/hate relationship, it will be interesting to see how this intensifies throughout the movie – and how it will set audiences up for future Avengers releases.

The 2 minutes of footage shows what is already an amazing cast, but with more Marvel characters being brought into the mix, which includes the new revamp of Spiderman (yes, another one) – Civil War has brought out the big guns to make sure it’s the biggest super-hero movie of the year.

Though that won’t be an easy task, as 2016 sees the release of two massive DC Comic movies Batman v Superman: Dawn of Justice and Suicide Squad. With those movies bringing some of DC Comics best characters to life, and Marvel’s vast amount of characters in Civil War – 2016 is shaping up to be great year for comic-book and movie fans alike.

Captain America: Civil War is set for release on the 6th of May 2016.