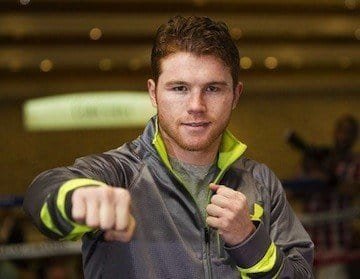 ‘Canelo’ Alvarez Net Worth in 2015 and 5 Interesting Facts

Saul Alvarez, AKA “Canelo”, is a pro Mexican, Light Middleweight boxer born on July 18, 1990 in Guadalajara, Mexico. His nickname ‘Canelo’ comes from the Spanish word ‘cinnamon’ due to his red hair. Alvarez made a name for himself in Mexico when he was only 15 back in 2015 after turning a pro.

Canelo Alvarez made it on Forbes List of ‘The World’s Highest-Paid Athletes’ in 2014, on spot #66.

Here are the most interesting 5 facts about Saul Alvarez, AKA “Canelo”:

1. Manny Pacquiao was allegedly offered a $65 Million to face ‘Canelo’ in Mexico but Pacquiao declined.

2. On May 5th, 2012, Saul Alvarez earned a whopping $1.2 million when after facing and defeating Sugar Shane Mosley.

3. On September 16th 2012, Saul Alvarez defeated Josesito Lopez and billed another $2 million along with a $100,000 knockout bonus from Golden Boy Promotions.

4. He also faced Floyd Mayweather back in September 14, 2013 and after losing by decision, Canelo bagged $5 million plus a percentage of PPV profits totalling up to $12 million.

5 . After facing and been defeated by Mayweather, Alvarez recovered to beat Alfredo Angulo and banked $7.5 million, taking his 2013 total revenue to $19.5 million.

His net worth is not 100% confirmed, however sources claim that his net worth could be around the $30 million.