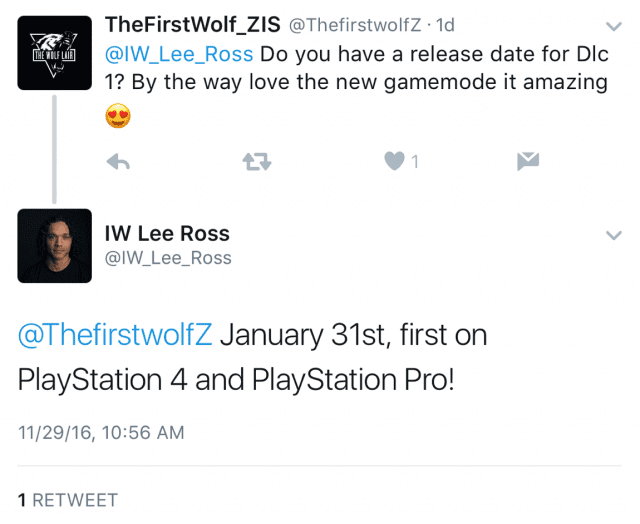 A few days ago, Sony released a small part of Call of Duty: Infinite Warfare video footage captured on its PS4 Pro hardware. The footage was a mash-up of snippets from the game’s campaign. It gave people an overall idea of what we can expect from Call of Duty: Infinite Warfare. Following the video footage, recent leaks suggest that Activision will soon release game’s DLC-1 to Sony’s PS4 and PS4 Pro.

Call of Duty: Infinite Warfare will be first on PS4 and PS4 Pro

Isn’t that a great news? Yes. Infinity Ward and Activision would possible release yet another enormous annual editions of their game in less than two months. The game’s DLC 1 will be coming to Sony’s PlayStation4 and PS4 Pro consoles on January 31, 2017. Later, the game will be coming up for Xbox One and Windows PCs.

The Tweet Leak on the release date of Call of Duty: Infinite Warfare

In a recent tweet conversation Infinity Ward developer Lee Ross revealed the release date of the game. A fan “TheFirstWolf_ZIS” directly asked Ross on the date of release of the DLC 1 of Call of Duty: Infinite Warfare. For this, Ross had tweeted back that the game will be first released on PS4 and PS4 Pro  on January 31, 2017. However, Ross deleted his tweet later. Perhaps Ross just leaked the information in an uncontainable momentary excitement.

However, Ross has not mentioned his reasons behind deleting the twitter post. Also, Activision has not yet commented anything regarding the date of release of the DLC 1 of Call of Duty: Infinite Warfare edition. The release date of Call of Duty: Infinite Warfare might be announced at the PlayStation Experience expo scheduled to happen in the coming weekend. Hold on! It might just be a few days  of waiting!

The Nestron Cube Two hosts two bedrooms, a big living room, a kitchen, a bathroom with a shower, and solar panels for the perfect off-grid tiny house living.