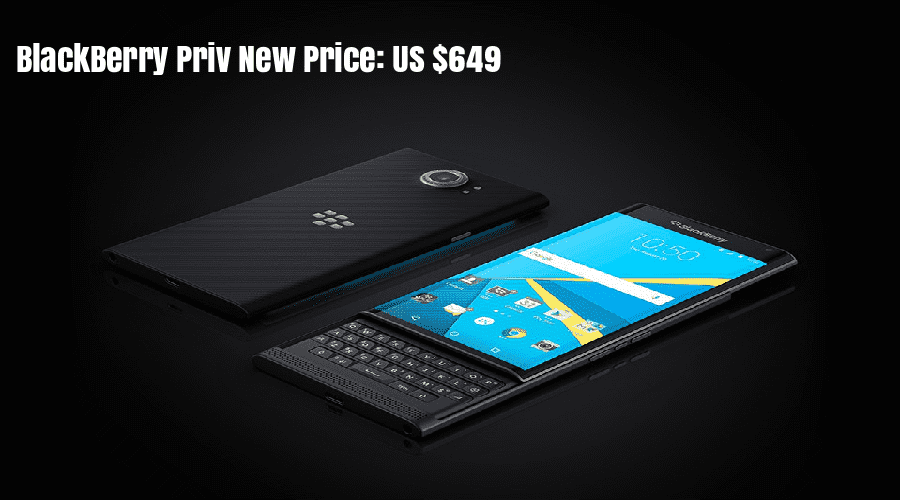 BlackBerry reduces the price of its first Android phone to $649.

On Tuesday, the Canadian company announced a permanent price cut for BlackBerry Priv.

“In order to ensure as many people as possible can enjoy our first Secure Android Smartphone, we’re reducing the price.”

In a blog post, the company revealed that the price change is not applicable in the company’s home country Canada. It only applies to select markets, including the U.S., the UK, Germany, France, Italy, Netherlands and Spain.

To recall, Priv is BlackBerry’s first Android smartphone that comes running Android 5.1.1 Lollipop operating system. With a 5.4-inch dual-curved AMOLED screen, a display resolution of 1.440×2,560 pixels and 540ppi, a Qualcomm Snapdragon 808 Hexa-Core (64-bit) processor, 3 GB of RAM and 32 GB of internal memory expandable to 2 TB; the new BlackBerry device combines everything we have come to expect from BlackBerry.

It is fitted with an 18-megapixel rear-facing camera and a 2-megapixel front-facing selfie camera. The battery of the Priv offers up to 22.5 hours of mixed usage.

BlackBerry Priv has an elegant slim design, a slide out physical keyboard, superior security along with Android’s full eco-system and apps.

The company has also announced an Android 6.0 Marshmallow beta program for BlackBerry Priv and customers should be seeing the latest operating system on their devices this spring.

Even with so much going on, the Priv was considered too expensive when compared to other high-end smartphones.

In an interview with CNBC, John Chen, the CEO of BlackBerry agreed that the Priv might have been priced too high, but he also expressed confidence in the company succeeding in the phone business.

This price cut should change that and encourage customers to get their hands on BlackBerry’s first Android phone.

In addition to the price cut on BlackBerry Priv, as part of its spring sale that ends on April 12, the company also announced a 30 percent discount on all Priv accessories.